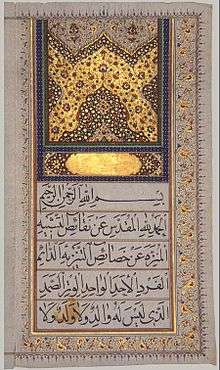 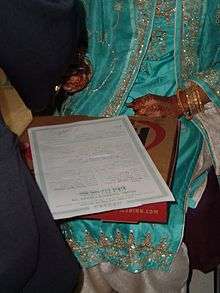 An Islamic marriage contract (Arabic Katb el-Kitab, Hebrew Ketubah, Urdu Nikah-Nama) is an Islamic prenuptial agreement. It is a formal, binding contract considered an integral part of an Islamic marriage, and outlines the rights and responsibilities of the groom and bride or other parties involved in marriage proceedings.

In Sunni Islam, a marriage contract must have two male witnesses, or, in the Hanafi school of jurisprudence, one man and two women, if a second male is unavailable. Proper witnessing is critical to the validation of the marriage, also acting as a protection against suspicions of adulterous relationships. The importance of this is demonstrated in a narration in which a case was brought before the second caliph Umar concerning a marriage which had been witnessed by only one man and one woman (i.e. the participants); he responded: "This is a secret marriage and I do not permit it. Had I been the first to come upon it, I would have ordered them to be stoned."[1]

In Shia Islam, witnesses to a marriage are deemed necessary, but in case are not available then the two parties may conduct the nikah between themselves.[2] It is also believed that temporary marriage, or Nikah Mut'ah (a type of contract which had more relaxed requirements) was prohibited in Sunni Islam, the necessity of witnessing was introduced by Sunni caliphs, specifically Umar, to ensure that no couples engaged in secret union.

Marriages are usually not held in mosques, and men and women are separated during the ceremony and reception. Islam doesn't authorize any official clergy, so any Muslim who understands the Islamic tradition can be the official for the wedding. However, if a Muslim wedding is held in a mosque, then a marriage officiant, known as qadi, qazi or madhun (Arabic: مأذون‎‎), may preside over the wedding. [3]

While it is customary for marriage contracts to be written down, particularly when the bride and groom wish to make any stipulations, classical jurists required only oral offer and acceptance for the contract's validity.

Among the stipulations that can be included in the contract include giving up, or demanding, certain responsibilities.[4] The contract may also be used to regulate the couple's physical relationship, if needed.

The marriage contract can also specify where the couple will live, whether or not the first wife will allow the husband to take a second wife without her consent, whether or not the wife has the right to initiate divorce, and other such matters. The marriage contract somewhat resembles the marriage settlements once negotiated for upper-class Western brides, but can extend to non-financial matters usually ignored by marriage settlements or pre-nuptial agreements.

One important purpose of the contract is that which makes sexual intercourse legal. This is supported by various Hadiths and quotations:

Cited in (Al Aqad,2014) the common problem of translation of marriage contracts is due to the varieties of word synonyms in the legal Arabic system which have no equivalence in the English system in terms of marriage contracts, such as; مهزٍ, شبكه, صداق. الخ , Mahr, Shabkah, Sadaq- (dowry), whereas, all of these examples attributed and affected by the culture and tradition of the Arabic language.[7]