Blasphemy in Islam is impious utterance or action concerning God, Muhammad or anything considered sacred in Islam.[1][2] The Quran admonishes blasphemy, but does not specify any worldly punishment for blasphemy.[3] The hadiths, which are another source of Sharia, suggest various punishments for blasphemy, which may include death.[3][4] However, it has been argued that the death penalty applies only to cases where there is treason involved that may seriously harm the Muslim community, especially during times of war.[5] Various fiqhs (schools of jurisprudence) of Islam have different punishment for blasphemy, depending on whether blasphemer is Muslim or non-Muslim, man or woman.[3] The punishment can be fines, imprisonment, flogging, amputation, hanging, or beheading.[6][7]

Muslim clerics may call for the punishment of an alleged blasphemer by issuing a fatwā.[8][9]

There are a number of surah in Qur'an relating to blasphemy, from which Quranic verses 5:33 and 33:57-61 have been most commonly used in Islamic history to justify and punish blasphemers.[4][10][11] For example,[4]

Those who annoy Allah and His Messenger - Allah has cursed them in this World and in the Hereafter, and has prepared for them a humiliating Punishment.
— Quran 33:57

Truly, if the Hypocrites, and those in whose hearts is a disease, and those who stir up sedition in the City, desist not, We shall certainly stir thee up against them: Then will they not be able to stay in it as thy neighbours for any length of time: They shall have a curse on them: whenever they are found, they shall be seized and slain (without mercy).
— Quran 33:61

According to several hadiths, Muhammad ordered a number of enemies executed "in the hours after Mecca's fall". One of those who was killed was Ka'b ibn al-Ashraf, because he had insulted Muhammad.[12]

The Prophet said, "Who is ready to kill Ka'b ibn al-Ashraf who has really hurt Allah and His Apostle?" Muhammad bin Maslama said, "O Allah's Apostle! Do you like me to kill him?" He replied in the affirmative. So, Muhammad bin Maslama went to him (i.e. Ka'b) and said, "This person (i.e. the Prophet) has put us to task and asked us for charity." Ka'b replied, "By Allah, you will get tired of him." Muhammad said to him, "We have followed him, so we dislike to leave him till we see the end of his affair." Muhammad bin Maslama went on talking to him in this way till he got the chance to kill him. Narrated Jabir bin 'Abdullah
— Sahih al-Bukhari, 4:52:270, see also Sahih al-Bukhari, 5:59:369, 3:45:687, 4:52:271

It has been narrated on the authority of Jabir that the Messenger of Allah said: Who will kill Ka'b b. Ashraf? He has maligned Allah, the Exalted, and His Messenger. Muhammad b. Maslama said: Messenger of Allah, do you wish that I should kill him? He said: Yes. He said: Permit me to talk (to him in the way I deem fit). He said: Talk (as you like).
— Sahih Muslim, 19:4436

Muhammad declared that there shall be no punishment for murdering anyone who disparages, abuses or insults him (tashtimu, sabb al rasool),[4]

Blasphemy has historically been seen as an evidence of rejection of Islam, that is, the religious crime of apostasy. Some jurists believe that blasphemy automatically implies a Muslim has left the fold of Islam.[3] A Muslim may find himself accused of being a blasphemer, and thus an apostate on the basis of one action or utterance.[13][14] Some[15][16] modern Muslim scholars contest that Islam supports blasphemy law, stating that Muslim jurists made the offense part of Sharia. 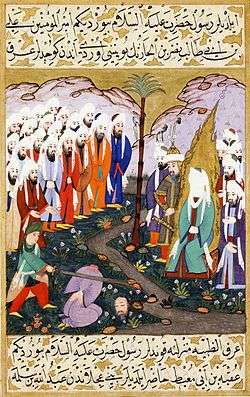 A painting from Siyer-i Nebi, Ali beheading Nadr ibn al-Harith in the presence of Muhammad and his companions.

The first executions for blaspheme were "in the hours after Mecca's fall" to the Muslims in 629. Muhammad ordered a number of enemies executed and based on this early jurists postulated that sabb al-Nabi (abuse of the Prophet) was a crime "so heinous that repentance was disallowed and summary execution was required".[17][18]

According to Islamic sources Nadr ibn al-Harith, who was an Arab Pagan doctor from Taif, used to tell stories of Rustam and Isfandiyar to the Arabs and scoffed Muhammad.[19][20] After the battle of Badr, al-Harith was captured and, in retaliation, Muhammad ordered his execution in hands of Ali.[21][22][23]

Legal historian Sadakat Kadri claims that the actual prosecutions for blasphemy in the Muslim historical record "are vanishingly infrequent". One of the "few known cases" was that of a Christian accused of insulting the Islamic Prophet Muhammad. It ended in an acquittal in 1293, though it was followed by a protest against a decision led by the famed and strict jurist Ibn Taymiyya.[24]

In recent decades Islamic revivalists have called for its enforcement on the grounds that criminalizing hostility toward Islam will safeguard communal cohesion.[18] In one country where strict laws on blaspheme were introduced in the 1980s, Pakistan, over 1300 people have been accused of blasphemy from 1987 to 2014, (mostly non-Muslim religious minorities), mostly for allegedly desecrating the Quran.[25] Over 50 people accused of blasphemy have been murdered before their respective trials were over,[26][27] and prominent figures who opposed blasphemy laws (Salman Taseer, the former governor of Punjab, and Shahbaz Bhatti, the Federal Minister for Minorities) have been assassinated.[25] 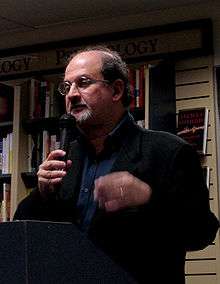 Writer Salman Rushdie was accused of blasphemy and became the subject of a fatwā issued by Ayatollah Ruhollah Khomeini, the Supreme Leader of Iran, in February 1989.

Individuals have been accused of blasphemy or of insulting Islam for:

Blasphemy against beliefs and customs

Individuals have been accused of blasphemy or of insulting Islam for:

The punishments for different instances of blasphemy in Islam vary by jurisdiction,[3][99][100] but may be very severe. A convicted blasphemer may, among other penalties, lose all legal rights. The loss of rights may cause a blasphemer's marriage to be dissolved, religious acts to be rendered worthless, and claims to property—including any inheritance—to be rendered void. Repentance, in some Fiqhs, may restore lost rights except for marital rights; lost marital rights are regained only by remarriage. Women have blasphemed and repented to end a marriage. Muslim women may be permitted to repent, and may receive a lesser punishment than would befall a Muslim man who committed the same offense.[14] In some jurisdictions blasphemy may be subject to the death penalty.[101] Many severe punishments are imposed in various Islamic societies.

In the case of an insult to Muhammad, the Muslim community is considered to be under an obligation to avenge the insult because the possibility of forgiveness expired upon the death of Muhammad.[3]

The Quran does not explicitly mention any worldly punishment for blasphemy (sabb allah or sabb al-rasul), as it does for apostasy (riddah). Islamic jurisprudence (fiqh) of Sunni and Shia madhabs have declared different punishments for the religious crime of blasphemy, and they vary between schools. These are as follows:[2][102][103]

Blasphemy against beliefs and customs

The punishment for non-conformity with prevailing beliefs and customs varies by jurisdiction.[99] In September 2009, Abdul Kahar Ahmad pleaded guilty in a Malaysian Sharia court to charges of spreading false doctrines, blasphemy, and violating religious precepts. The court sentenced Ahmad to ten years in prison and six lashes from a rattan cane.[115] In October 2009, Somalia's hardline Islamist group al-Shabaab whipped women who were wearing a bra, and whipped men for being beardless. The group said violation of Islamic custom deserved whipping.[116] In Malaysia, Islamic scholars issued a fatwa declaring yoga as blasphemous, because yoga is a form of spiritual practice in Hinduism.[117][118][119]

In 2014, an Egyptian state prosecutor pressed charges against a former candidate for parliament, writer and poet Fatima Naoot, of blaspheming Islam when she posted a Facebook message which criticized the slaughter of animals during Eid, a major Islamic festival.[120] Naoot was sentenced on January 26, 2016 to three years in prison for "contempt of religion." The prison sentence was effective immediately.[121]