"Swak" redirects here. For the acronym SWAK, see Sealed with a kiss (disambiguation). For the UK skeptical podcast, see Skeptics with a K. 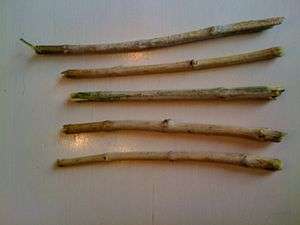 Traditional miswak sticks. Softened bristles on either end can be used to clean the teeth.

The miswak (miswaak, siwak, sewak, Arabic: سواك‎‎ or مسواك) is a teeth cleaning twig made from the Salvadora persica tree (known as arak in Arabic). A traditional and natural alternative to the modern toothbrush, it has a long, well-documented history and is reputed for its medicinal benefits.[1] It is reputed to have been used over 7000 years ago.[2] The miswak's properties have been described thus: "Apart from their antibacterial activity which may help control the formation and activity of dental plaque, they can be used effectively as a natural toothbrush for teeth cleaning. Such sticks are effective, inexpensive, common, available, and contain many medical properties".[3] It also features prominently in Islamic hygienical jurisprudence.

The miswak is predominant in Muslim-inhabited areas. It is commonly used in the Arabian peninsula, the Horn of Africa, North Africa, parts of the Sahel, the Indian subcontinent, Central Asia and Southeast Asia. In Malaysia, miswak is known as Kayu Sugi (Malay for 'chewing stick').

A 2003 scientific study comparing the use of miswak with ordinary toothbrushes concluded that the results clearly were in favor of the users who had been using the miswak, provided they had been given proper instruction in how to brush using it.[4] However, the study's sample size was only fifteen people, calling into question its statistical significance. Another study, dealing with the immediate anti-cariogenic effect of the miswak as compared to the toothbrush was done in 2004 with a sample size of 40 individuals. The effects of miswak were found to be more pronounced and beneficial.[5] There's also been another comparative study, that concluded "compared to tooth brushing, use of the miswak resulted in significant reductions in plaque (p < 0.001) and gingival (p < 0.01) indices".[6] The World Health Organization (WHO) recommended the use of the miswak in 1986, but in 2000 an international consensus report on oral hygiene concluded that further research was needed to document the effect of the miswak.[7] Some of this further research has been done on a population of 203, and concluded, in turn, "that the periodontal status of miswak users in this Sudanese population is better than that of toothbrush users".[8] Yet another comparative study says conducted on a sampling of 480 Saudi Arabian adults found that "the level of need for periodontal care in the sample chosen is low when compared with the findings of similar studies undertaken in other countries. The frequent use of the 'Miswak' was associated with a lower need for treatment".[9]

Dr. Rami Mohammed Diabi,[10] who spent more than 17 years researching the effects of miswak on health, and especially its anti-addiction effects on smokers (curative and preventive sides), has opened a field of science and research with his last publication: "Miswak Medicine Theory" or Sewak Puncture medicine[11] which led him to what is called Beyond Sewak: World of Science and Research.[12] Miswak also is contributing in the fight against desertification,[13] thereby affecting our environment and global climate. 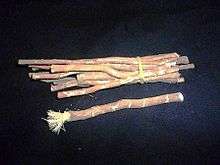 A pack of miswak sticks.

The use of the miswak is frequently advocated in the hadith (the traditions relating to the life of Muhammad). Situations where the miswak is recommended to be used include, before religious practice, before entering one's house, before and after going on a journey, on Fridays,[16] before sleeping and after waking up, when experiencing hunger or thirst and before entering any good gathering.

In addition to strengthening the gums, preventing tooth decay and eliminating toothaches, the miswak is said to halt further decay that has already set in. Furthermore, it is reputed to create a fragrance in the mouth, eliminate bad breath, improve sensitivity of taste-buds and promote cleaner teeth.

It is often mentioned that the Islamic Prophet Muhammad recommended the miswak's use. He is quoted in various hadith extolling its virtues:[17][18] 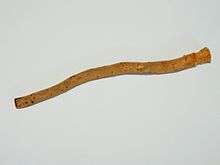 A miswak should be one hand span in length when selected. If it becomes dry, it should be soaked in rose water to soften the end bristles. The end should be cut afresh to ensure hygiene and should never be stored near a toilet or sink. The brush may be created by cutting Salvadora persica's branches instead of its roots; keeping in mind that the tree's roots can retain moisture more so than its branches. This favors more long-term usage.

Many companies offer special cases for carrying miswak. Many of these companies also produce miswak itself. The main purpose of these cases is to protect and carry miswak in order to preserve its freshness. Plastic toothbrush cases are available at most drug stores and may be used for carrying a sewak.