Not to be confused with Turba. For the village in Iran, see Turbah, Iran. 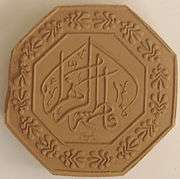 The calligraphy on this clay turbah states "Ya Fatima al-Zahra".

A turbah (Arabic: تربة‎‎ ; Persian: مهر‎‎ mohr) is a small piece of soil or clay, often a clay tablet, used during salat (Islamic daily prayers) to symbolize earth.[1] The use of a turbah is compulsory in most Shi'ah schools of Islam and many Hadith mention the benefits of prostration (Sajda) upon the soil of the earth or an alternative material. The most favoured soil is that of Karbala, the site of the death of Husayn ibn Ali; however, soil from anywhere may be used. In the absence of soil, plants or items made from plants may be substituted. This provision has been extended to include the use of paper.[2]

Following the instruction from the Qur'an, Shi’ah Ja’fari stated that "prostration must be performed on pure earth or what grows on it, provided that it is not eaten or worn." For example, prostration on paper is permissible because it is made of natural elements grown on earth.[3] Although it is not required of a person to prostrate on a turbah during prayer, many Muslims prefer to use one because it demonstrates their concern for the cleanliness of their bodies, clothes, and the place in which they pray, hence the production of the portable turbahs.

Mohammed and the use of the turbah

According to Abu Sa`id al-Khudri: “I saw Allah’s Apostle prostrating in mud and water and saw the marl of mud on his forehead.”[4] Though Mohammed prayed on the ground, the hadith Sahih al-Bukhari states that "Allah’s Apostle used to pray on Khumra."

The idea of "absolute consideration" states that some kinds of soil, and thus some kinds of places are better than others for prayer. For example, places, buildings, and structures related to Allah and Mohammed are held in the highest regard when it comes to places in which to hold prayer. [5]

Karbala is especially important to Shi’ah Muslims because the martrydom of Husayn ibn Ali is considered one of the major dividing lines between Muslims of the time. Husayn is important because of his relationship with Muhammad, and so therefore the dust from Karbala is considered to be one of the most sacred places to pray.

Since there are Muslims located all over the world, Shi’ah Muslims have created small clay tablets called mohr or Turbah from the ground of Karbala. However, since it is an issue of honor and respect, Muslims are allowed to prostrate on other earthen materials.[6]

Turbah has a primary meaning of dirt, earth or soil, but:

--Turbah is also designated as being the material God used to create the earth and humankind.

--Turbah is the ground on which one prostrates oneself for prayer. Additionally, clean dirt or dust can serve as a substitute for someone who is performing ablutions in the absence of clean water. The use of turbah in this process is known as tayammum.

Turbah is also used in connection with funerals because of death’s association with dust—a dead body eventually turns to earth after death.

--Turba or Türbe in Turkish is an Islamic funerary building in a variety of contexts.[7]

Sunnis reject the use of Turbah as bidah (innovation), noting that neither Muhammad nor his companions ever carried a clay tablet (or any other small item) with which to place their foreheads upon while in prostration. Sunnis also note that many Turbah used by Shia have inscribed invocations to their revered figures, such as 'Ya Hussein' (O Hussein), or 'Ya Zahra'. In Majmoo' al-Fatawa (Compilation of Fatawa), Sunni scholar Ibn Taymiyyah issued a fatwa that prayer on a Turbah from the site of Al-Hussein's martyrdom is an innovation, and people should pray on normal earth.[8]