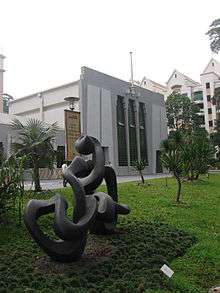 The Old Ford Motor Factory has been gazetted as a National Monument, and converted into an exhibition gallery and archive named Memories at Old Ford Factory. In the foreground is a calligraphic sculpture titled He Ping (和平), Chinese for "peace", by Singaporean artist Chua Boon Kee.

Lieutenant-General Arthur Percival, led by Lieutenant-Colonel Sugita Ichiji, marches under a flag of truce on the driveway towards the Ford Motor Factory to negotiate the capitulation of British forces in Singapore on 15 February 1942.

The factory was built by Ford Motor Works in October, 1941, with an Art Deco façade typical of buildings of that era, and became Ford's first motor car assembly plant in Southeast Asia.[1] However, Japanese forces invaded Singapore shortly thereafter. During the Malayan Campaign, the factory's modern assembly equipment was used by the Royal Air Force to assemble fighter planes. The planes came in parts that were shipped to Singapore in crates. However, most of these aircraft never fulfilled their purpose of defending Malaya. They were flown out of Singapore towards the end of January 1942, when prospects for Singapore looked bleak. Many battles were fought around the areas of the Ford Factory in Bukit Panjang, Choa Chu Kang, Bukit Batok and Bukit Timah. The factory was subsequently taken over by the Imperial Japanese Army and used as its military headquarters. Following the British surrender, Japanese forces relocated its headquarters to Raffles College along Bukit Timah Road.

During the Japanese occupation of Singapore, the factory was designated as a butai or Japanese facility. Nissan, which was then a prominent zaibatsu or Japanese multinational company, took over the plant to assemble trucks and other vehicles for the Japanese military.

The Ford Motor Factory resumed operations after the war in 1947 and was finally shut down in June 1980 and abandoned for some time since then. On 7 February 2006, the Preservation of Monuments Board announced that it would gazette the historic factory for preservation as a National Monument on the 64th anniversary of the surrender on 15 February 2006.[2][3][4]

The National Archives of Singapore, the new custodian of the historical site, has converted the building to house an exhibition gallery and repository called Memories at Old Ford Factory. The preserved Old Ford Motor Factory underwent a two-year, S$10.3 million facelift and is now the National Archives's second repository for its growing archives of various media. The permanent exhibition gallery showcases life in Singapore under Japanese rule, and the exhibition is a continuation from the one on the last battles fought at Pasir Panjang.

The original factory building was very deep but much of it has been removed leaving the front facade and a building of moderate depth. Careful restoration work had been undertaken for the building to ensure that its façade was restored as close as possible to the building's original facade when it was first completed in 1941. The boardroom where the surrender took place remains intact and is preserved. It contains a replica of the original table (the original now with the Australian War Memorial), a clock set at the exact time of the surrender, and a map of Malaya. There is now a large modern structure at the street level south of the factory building where visitors can enter and have a walk either up the hill or through this building to the factory.

The journey through the exhibition begins at a reconstructed tunnel, which documents the events leading to the fall of Singapore. Newspaper clips, maps and historical artefacts line the walls, ceiling and floor of the tunnel. At the same time, new facilities such as an audio-visual theatre, with a seating capacity for 76 people, are also integrated into the refurbishment. The theatre screens specially commissioned documentaries, highlighting different aspects of life in Syonan-to – the name given to Singapore during the Japanese occupation. The garden plot behind the gallery features wartime crops like tapioca, sugar cane and bananas with a wooden walkway similar to that found during the period as well as explanations of the plants.

Behind the museum are tall condominium buildings and a transmission tower. The front of the museum features a Chinese calligraphic sculpture called He Ping (和平, "peace" in Chinese), storyboards recounting the battles fought during the Malayan Campaign and the history of Bukit Timah, as well as a granite rock carved with a statement from a decree by Tang dynasty Emperor Taizong urging visitors to "take history as a lesson".

Memories at Old Ford Factory (Chinese: 昭南福特车厂纪念馆; Malay: Kenangan di Kilang Ford Lama) was officially opened by Singapore's Defence Minister Teo Chee Hean on 16 February 2006. The museum had free admission during its first year of opening. The museum had 57,800 visitors in 2010 alone,[5] but as of May 2016 it is closed for renovations.[6]