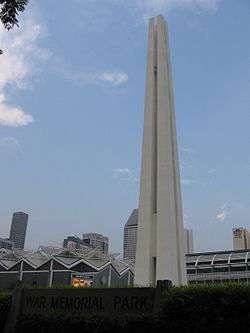 The Memorial to the Civilian Victims of the Japanese Occupation, usually called the Civilian War Memorial (Chinese: 日本占领时期死难人民纪念碑; Malay: Tugu Peringatan Bagi Mangsa Awam Pemerintahan Jepun) is a war memorial and heritage landmark in Singapore. It was built in memory of the civilians killed during the Japanese occupation of Singapore during World War II. The Civilian War Memorial sits on serene parkland in the midst of busy city traffic near Singapore's Padang and City Hall. Located within the War Memorial Park at Beach Road within the Central Area, Singapore's central business district, it is usually easy to spot in most backdrops encompassing the CBD landscape.

During the Japanese Empire's occupation of Singapore during the Pacific War (1942–1945), thousands of ethnic Chinese were killed in the Sook Ching massacre. In an effort to remove anti-Japanese elements in Singapore, Chinese men between the ages of 18 and 50 were to report to the Kempeitai, the Imperial Japanese Army military police. The death toll was reported to be 6,000 by the Japanese, but official estimates range between 25,000 and 50,000.[1]

In February 1962, remains belonging to civilian victims of the Japanese occupation were unearthed in areas like Siglap, Changi and Bukit Timah. The Singapore Chinese Chamber of Commerce and Industry (SCCC) undertook the responsibility of gathering the remains and creating a memorial.

On 13 March 1963, Prime Minister Lee Kuan Yew set aside a plot of land at Beach Road for the building of a memorial dedicated to the civilians killed in World War II. The SCCC set up a fund committee that was later enlarged to include all ethnic groups due to good response from the community. With the support of the Government and contributions from the public, construction of the memorial was able to start.

Construction of the memorial began on 23 April 1966. The memorial was completed in January 1967 at a total construction cost of about S$500,000. 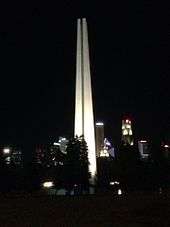 The Civilian War Memorial lit up at night

The design of the memorial was conceived by one of Singapore's most renowned architects, Leong Swee Lim (1935–2002) of Swan and Maclaren Architects; it won first prize in an open design competition. The design was one of Leong's most famous and significant contributions towards Singapore's architecture. The four identical pillars, each 70 metres (230 ft) high, represent the shared experiences and unity of the four major races of Singapore – Chinese, Eurasian, Indian and Malay. The memorial is one of Singapore's iconic heritage landmarks that truly embraces the virtues of a multiracial and multicultural city, the unity of which is inevitably one of the pillars for Singapore's modern day success, harmony and prosperity.

The memorial has also been affectionately described by some as resembling four giant chopsticks. Unseen to the eye, the remains of the unidentified war victims are buried beneath the monument, adding to the material significance of the structure whose history it represents.