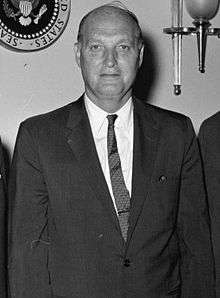 John Moran Bailey (November 23, 1904 – April 10, 1975) was an American politician who played a major role in promoting the New Deal coalition of the Democratic Party and its liberal policy positions.

Bailey dominated Connecticut Democratic politics as a party chairman, from 1946 to his death in 1975. He typically had a decisive voice in selecting the party's candidates for top offices, and in coordinating Democrats in the state legislature. He was even more powerful as the chairman of the Democratic National Committee from 1961 until 1968, and was one of the main behind-the-scenes backers of John F. Kennedy.

An Irish Catholic, Bailey was educated at The Catholic University of America and Harvard Law School.

Bailey was the dominant figure in Connecticut politics between 1950 and his death in 1975. From his office in Hartford two blocks from the State Capitol, he coordinated and controlled statewide election campaigns and the activities of the Connecticut General Assembly.

Bailey's tenure as head of the Connecticut Democratic party was credited with turning the state from one politically dominated by WASP Yankee Republicans to one dominated by Democratic candidates of Roman Catholic and Jewish background, such as Abraham Ribicoff, Thomas Dodd, John Dempsey, and Ella T. Grasso.

His Republican rival was Meade Alcorn, who also happened to serve as National Chairman of his party.

Prior to his statewide activities, Bailey served in local roles in his home city of Hartford.

Bailey on the National Scene

Bailey's term as DNC Chairman was a roller coaster ride, with him overseeing the Party's moment of greatest political strength (following the 1964 electoral landslide) and greatest political weakness (the 1968 Democratic National Convention in Chicago).

Following the assassination of John F. Kennedy in 1963, Bailey with President Johnson oversaw the greatest electoral landslide in United States history, winning 486 electoral votes for LBJ, and supermajorities in both the US House and Senate. The 1966 U.S. House and U.S. Senate election saw Republican gains, but the Democrats retained their majority status in the Senate and House and the majority of Governorships.

In 1968, Republicans nominated Richard Nixon again to be their Presidential nominee, quickly rallying around him while the Democrats were more divided, particularly over the contentious issue of the war in Vietnam. Senator Eugene McCarthy, Senator Robert F. Kennedy, Senator George McGovern, Vice President Hubert Humphrey and others all sought the nomination, with Bailey co-presiding over the 1968 Democratic National Convention in Chicago. In the end, it saw Richard Nixon elected but with a Democratic Majority in the United States Congress.

Bailey died in 1975 and was interred at Cedar Hill Cemetery in Hartford, Connecticut.[1]

The John M. Bailey Papers have been donated to the University of Connecticut and are available for research.[2]

Connecticut Democrats honor Bailey each year with their Jefferson-Jackson-Bailey Dinner. An admiring biography of Bailey was written by Senator Joe Lieberman in 1981.[3]

The Bailey and Kennelly families have a prominent presence in the Connecticut Democratic Party and in their home city of Hartford. In Hartford, they're one of the last prominent Irish families in a city that is now dominated by African-Americans and Puerto Ricans. [4]

Bailey's daughter, Barbara Bailey Kennelly served in the U.S. Congress representing Connecticut's first congressional district. She later left the House to run for governor in a race she lost to the incumbent, John G. Rowland.

Another Bailey daughter, Judith Bailey Perkins, is a professor at Saint Joseph College in West Hartford.

Many of Bailey's grandsons continue his legacy of public and political service: John Moran Bailey II is currently the Director of Government and Community Affairs for a nonprofit, SINA Inc., working to stabilize one of Hartford's poorest and blighted communities; another grandson Justin Kronholm, is the former Executive Director of the Connecticut Democratic State Central Committee.

Another grandson, John B. Kennelly was previously elected to Hartford Court of Common Council and was an early rival to Hartford mayor Eddie Perez.