The 2005 Democratic National Committee (DNC) chairmanship election was held on February 12, 2005, to elect a chairperson to the DNC for a four-year term. Howard Dean was elected as the DNC chair, succeeding Terry McAuliffe. 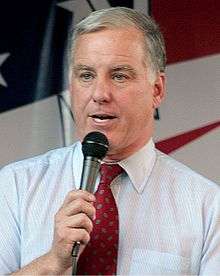 Dean became the front-runner in the race, though Roemer received the endorsements of Harry Reid and Nancy Pelosi, the Democratic Party leaders in the United States Senate and United States House of Representatives, respectively.[8] Though the executive committee of the Association of State Democratic Party chairs recommended an endorsement of Fowler,[9][10] the group chose to endorse Dean on January 31. Webb dropped out and endorsed Dean.[11] On February 1, Dean announced the endorsements of 53 more members of the DNC, increasing his total number of DNC supporters to 102.[12] The AFL–CIO opted not to endorse a candidate.[13] Meanwhile, the Service Employees International Union endorsed Dean.[14] Without the support of the labor movement, Frost dropped out.[15][16] Receiving little support, Leland dropped out as well.[14]