In 1884, the Democrats gathered in Chicago for their National Convention. The leading candidate for the presidential nomination was New York Governor Grover Cleveland. Cleveland's reputation for good government made him a national figure. The Republican Party nominated James G. Blaine for president in 1884, although he had been implicated in a financial scandal. Many influential Republicans were outraged, thought the time had come for a national reform administration and withdrew from the convention. These Republicans are called mugwumps, and declared that they would vote for the Democratic candidate based on his integrity. The Democrats made Cleveland their presidential nominee with the former Governor Thomas A. Hendricks of Indiana as the vice presidential nominee.[1] 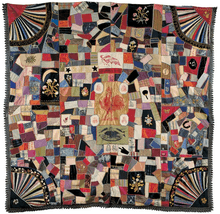 A crazy quilt in support of the Democratic ticket from the collection of the American Folk Art Museum, featuring the Democratic Rooster (precursor of the Donkey) at center and photos of Cleveland and Hendricks below.