The 1864 Democratic National Convention was held at The Amphitheatre in Chicago, Illinois.[1]

The Convention nominated Major General George B. McClellan from New Jersey for President, and Representative George H. Pendleton of Ohio for Vice President. McClellan, age 37 at the time of the convention and Pendleton, age 39, are the youngest presidential ticket ever nominated as of 2016.

General George B. McClellan and former Connecticut Governor Thomas H. Seymour vied for the presidential nomination. In addition, friends of Horatio Seymour insisted on placing his name before the Convention. But on the day before the organization of that body, Horatio Seymour announced positively that he would not be a candidate.[4] Nonetheless, a portion of the Illinois delegation placed Seymour's name in nomination during the convention. Seymour, the permanent chairman at the Democratic National Convention, declared that the Illinois delegate was "not in order" since a different motion was already under discussion.[5]

Other candidates were placed in nomination before eventually being withdrawn. Senator Lazarus W. Powell was placed in nomination by the Delaware delegation, but Mr. Powell personally asked that his name be withdrawn since he believed the eventual Democratic presidential candidate "should come from one of the non-slaveholding States".[6] Amid "great applause", a portion of the Kentucky delegation placed the name of Former President Franklin Pierce before the convention.[7] But Pierce's name was withdrawn from consideration when a delegate revealed that he had received both written and verbal instructions from the former president stating that he did not wish to be presented as a candidate.[8]

After a revised first ballot, McClellan, a War Democrat, was nominated over the Copperhead Thomas H. Seymour. The motion to have McClellan's nomination be declared unanimous was carried. 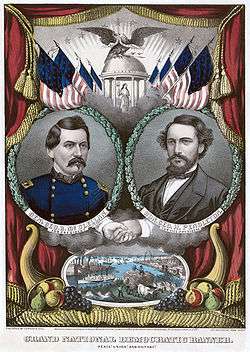 Since the Democrats were divided by issues of war and peace, anti-war Representative George H. Pendleton was nominated for vice-president. Pendleton, a close associate of the Copperhead Clement Vallandigham, balanced the ticket since he was known for having strongly opposed the Union war effort.[9]

The convention then adopted a peace platform[10] — a platform McClellan personally rejected.[11] McClellan supported the continuation of the war and restoration of the Union, but the party platform, written by Copperhead Clement Vallandigham, was opposed to this position.