One of the prime functions of Democrats Abroad is to assist U.S. citizens abroad in voter registration. To this end, it has created a Website VoteFromAbroad.org which overseas Americans (Democrats and non-members alike) can use to register to vote. Since Presidents and members of Congress are elected by state, Americans abroad vote in the state in which they have most recently lived, each of which has its own registration and voting procedures. This website also has a Spanish-language version for Spanish-speaking voters.

This website asks voters which state they last lived in and then starts a wizard specific to their state that asks for the information necessary to comply with the election laws of that state. After all the information has been supplied, a PDF is created, which the voter can then print, sign, and mail to the address provided (or sometimes fax, or scan and attach to email). Online voter registration is offered in Arizona (2002),[1] Washington (2008)[2] and 29 other states as of June 2016 [3]

Several weeks before the election, the Board of Elections or County Registrar (states use various names) sends the voter an absentee ballot which the voter then fills out and sends back in order to cast his or her vote.

In addition to helping Americans living overseas to register to vote, Democrats Abroad engages in many other activities, mostly on a per country or per locality basis. Among other things, Democrats Abroad:

Democrats Abroad has eight officers. All of them are elected. Officers include:

Democrats Abroad is represented on the Democratic National Committee by eight members. The International Chair and Vice Chair are ex-officio members of the DNC.

Democrats Abroad was started with two small committees in London and Paris after Lyndon B. Johnson defeated Barry Goldwater in the 1964 U.S. presidential election. Its original leaders, Toby Hyde and Al Davidson, raised funds and formed committees, and pushed for state-level recognition of Democrats Abroad. DNC Chairman John Bailey allowed Democrats Abroad to send nine non-voting representatives to the Democratic National Convention in 1972; in 1976, the group was granted the status of a state committee, with voting delegates in the Convention.

Democrats Abroad sends a delegation to the Democratic National Convention every four years and has done so since 1976.

Results In the presidential primary of 2016, Democrats Abroad reported a win for Bernie Sanders. Receiving 69% of the vote to Hillary Clinton's 31%, Bernie picked up 9 delegates to Clinton's 4. Sanders also received 4 pledged superdelegates. Voter turnout was up 50% from the 2008 election, with 34,570 voters from over 170 countries.[5]

On May 28, 2012, Democrats Abroad released the full list of delegates elected in the organization's Global Primary. The results were certified by the International Chair, Ken Sherman.

For the 2008 Democratic Primaries, Democrats Abroad enabled millions of U.S. citizens living overseas to have the chance to vote in the first-ever online global primary to choose the Democratic nominee for President.

The worldwide election results determined the 14 delegates who joined eight DNC members in Democrats Abroad's delegation of 22 to the Democratic National Convention. These delegates were elected at a combination of regional and global meetings held during early 2008. These meetings also provided an opportunity for Americans abroad to shape the party's election platform.

American citizens living overseas who wanted to vote in the Democratic global primary had to have joined Democrats Abroad by January 31 and then requested a ballot at VoteFromAbroad.org. They could also join in person at voting centers.

The Democrats Abroad Global Primary took place from February 5–12, 2008. Democrats Abroad Regional Caucuses for Europe-Middle East-Africa took place in Brussels on March 15, 2008, and for the Americas and Asia-Pacific in Vancouver, Canada, on April 11, 2008.

The results of the Global Primary were as follows:

Twenty-two delegates, including 8 superdelegates, traveled 125,000 miles from around the world to Denver, CO to represent Democrats Abroad at the Democratic National Convention August 25–28, 2008. Democrats Abroad is the official arm of the Democratic Party for Americans living outside of the United States. The 22 delegates each have a half vote, bringing the organization's total votes to 11.

Every member of the Democrats Abroad delegation has taken part in the "Green Delegate Challenge" sponsored by House Speaker and Permanent Convention Chair Nancy Pelosi (D-CA) and Convention organizers, by obtaining carbon offsets for their travel.

Criticism focused on the internet voting, suggesting the possibility of hacking and other subterfuge,[6] though there was no evidence that such hacking occurred.

Professor David Dill of Stanford University questioned whether having a private company run a public election, with little oversight, was appropriate. The software used for Internet voting was provided by the private company Everyone Counts.[6] The provider of internet voting was spun off from an Australian company in 2003.[7] In 2006 the company received an "injection of U.S. private equity" from an undisclosed source.[6][8]

The corporation running the election, Everyone Counts, named Paul DeGregorio, former Republican chair of the Election Assistance Commission as Chief Operating Officer in 2007.[9]

The final results for the February 5–12 Democrats Abroad Global Primary were not released until February 21, nine days after the voting had concluded. The initial reporting of results incorrectly reported the results of the election. The error was reported as a result of "a programming error in a spreadsheet column."[10]

Rule 13 allowed reporting of "provisional" results on the first day of voting. Based on partial results, the international news media reported large Obama victories as soon as these manual polling stations closed. These totals did not include any of the postal or Internet votes:

At 3 a.m., there are still around 30 Democrats watching CNN as results are projected on a giant screen. When the news channel reports that Obama has apparently won the international Democratic primary in Jakarta, Indonesia, they begin cheering -- more because the station has just flashed the Democrats Abroad logo on the screen than because the Illinois senator has won.[11]

These are the results for the Voting Center in Tokyo, this tally is provisional, does not include internet, fax or mailed ballots, and is subject to ratification from the chair of Democrats Abroad. But here goes.... (drum roll please) 2/5/2008 Tokyo Voting Center % report = 83% Obama 13% Clinton 2% Edwards 1.% Kucinich 1.% Richardson

Voting was scheduled to occur from February 5–12, not just on February 5. 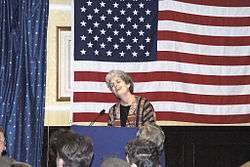 In 2004, Democrats Abroad chose its delegates to the Democratic National Convention via the caucus system, similar to the Iowa caucuses. Caucuses are different from primaries. In the latter, people show up, vote, and go home. In a caucus, different areas or rooms are available for each candidate so that his or her supporters can gather and discuss their candidate's strengths and weaknesses. Caucusgoers who are unsure of their choice can move from room to room to hear about multiple candidates. Straw polls may be taken during the process. Eventually, all the caucusgoers meet in a plenary session and representatives from each room give a short presentation on why his or her candidate should be the Democratic nominee. Then a vote is taken. If some candidates' support is below a certain threshold, that candidate is eliminated and everyone is given the opportunity to switch support. Then a final vote is taken and the number of delegates for each candidate is determined, proportional to his or her share of the vote. The final step consists of the actual election of the delegates pledged to each candidate.

At the caucuses, politicians spoke, as well as Diana Kerry, the sister of the eventual nominee Sen. John Kerry.

22 delegates and two alternates went to the 2004 Democratic National Convention in Boston.