Joseph Anthony Califano Jr. (born May 15, 1931) is a former United States Secretary of Health, Education, and Welfare and the founder and chairman of The National Center on Addiction and Substance Abuse at Columbia University (CASAColumbia), an evidence-based research organization. He is one of two living former Secretaries of Health, Education, and Welfare (the other is his predecessor, Forrest David Mathews).

He has been Adjunct Professor of Public Health (Health Policy and Management) at Columbia University Medical School (Department of Psychiatry) and School of Public Health and is a member of the Institute of Medicine of the National Academy of Sciences.

Military and Department of Defense

In 1955, Califano enlisted in the Navy as an officer candidate. He was commissioned an ensign in November 1955, served three years in the Office of the Judge Advocate General in Washington, D.C., and was released to inactive duty in October, 1958, as a lieutenant. He associated with the law firm of Dewey Ballantine in New York City from October 1958, until April 1961.

In April 1961, Califano became Special Assistant to the General Counsel of the Department of Defense. In July 1962, he was appointed Special Assistant to the Secretary of the Army. On July 1, 1963, he was appointed General Counsel of the Army. He also served as Special Assistant to the Secretary of the Army for Civil Functions, supervising the Corps of Engineers' Civil Works Program and was a member of the President's Appalachian Regional Commission. In early 1964, Califano was selected to serve as the principal legal advisor to the United States Delegation to the Investigating Committee of the Organization of American States on the Panama riots of January 1964. Subsequently, he was also selected to present the United States case before the International Commission of Jurists during hearings held in Panama dealing with those riots. In recognition of his work as General Counsel of the Department of the Army, Califano was awarded the Distinguished Civilian Service Medal, the highest civilian award of the Army.

Califano was appointed Special Assistant to President Lyndon B. Johnson on July 26, 1965. In this position, Califano served as LBJ's top domestic aide, developing the President's legislative program as well as helping coordinate economic policies and handling domestic crises. He also worked on a variety of domestic problems, including labor-management relations, balance of payments, health care, education, environmental and urban issues, and civil rights. He served in this position until January 20, 1969. While in this post, The New York Times called him "The Deputy President for Domestic Affairs." 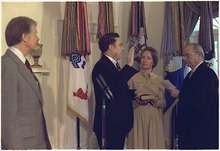 Califano was sworn in as Secretary of HEW.

In January 1977, Califano became Secretary of Health, Education, and Welfare.He served in that Cabinet post until August 1979. He put the Department through the most complete reorganization in its twenty-five year history; created the Health Care Financing Administration (HCFA) to run Medicare and Medicaid; mounted major health promotion and disease prevention programs, including childhood immunization, the first national anti-smoking campaign, an alcoholism initiative, and issuance of Healthy People, the first Surgeon General's Report on Health Promotion and Disease Prevention which for the first time set health goals for the American people; began the collection of hundreds of millions of dollars of defaulted student loans, and instituted computerized techniques to police welfare, Medicare and Medicaid programs; worked with the Congress to maintain the financial integrity of the Social Security system, contain health care costs, and restructure Federal aid to elementary, secondary and higher education; and issued the first regulations to provide equal athletic opportunity to women under Title IX and to provide equal opportunity to the handicapped.

However, initially he refused to sign meaningful regulations for Section 504 of the Rehabilitation Act of 1973, which was the first U.S. federal civil rights protection for people with disabilities.[2] After an ultimatum and deadline, demonstrations took place in ten U.S. cities on April 5, 1977, including the beginning of a sit-in at the San Francisco Office of the U.S. Department of Health, Education and Welfare. This sit-in, led by Judith Heumann and organized by Kitty Cone, lasted until April 30, 1977, 25 days, with more than 150 people refusing to leave. It is the longest non-violent sit-in at a federal building to date. Califano signed the regulations on April 28, 1977.[3][4][5][6][7][8]

In 1979, as Secretary, Califano directed the Public Health Service to eliminate its official characterization of homosexuality as “a mental disease or defect” which immigration authorities had used to deny individuals entry to the United States solely because of their sexual orientation.

In January 1980, Califano formed the law firm of Califano, Ross & Heineman in Washington, D.C. From 1983 until 1992, he was senior partner and head of the Washington office of Dewey Ballantine. In 1992, he founded The National Center on Addiction and Substance Abuse at Columbia University (CASAColumbia).

Califano has also written articles for The New York Times, The Washington Post, The Wall Street Journal, Readers Digest, New Republic, Journal of the American Medical Association, The New England Journal of Medicine, America, The Washington Monthly, and other publications.

He was Founding Chairman of the Board of the Institute for Social and Economic Policy in the Middle East at the Kennedy School of Government at Harvard University.

Califano is a director of CBS Corporation and Willis Group Holdings, Ltd. He is a Trustee of New York Presbyterian Hospital, The Century Foundation, The Urban Institute, The American Ditchley Foundation, The LBJ Foundation and the National Health Museum; Trustee Emeritus of The John F. Kennedy Center for the Performing Arts, and a member of the advisory council of the American Foundation for AIDS Research and the Council on Foreign Relations.

In 2010, Califano received the Gustav O. Lienhard Award from the Institute of Medicine for his contributions to improving public health, his leadership in catalyzing federal action to curb smoking and his broader efforts to reduce the toll of addiction and substance abuse.[10]

In November 2011, the Columbia Spectator editorial board published a piece titled "Cut ties to CASA", stating that "the methods that CASA uses to research substance abuse are shoddy and questionable, and reports of CASA’s “findings” are often misleading and sensationalized" and that "Califano’s outlandish claims reflect on the integrity of the organization, and unfortunately on Columbia’s as well."[11] Contrary to the claims made in the Spectator article, the organization’s research staff has published more than 190 articles or book chapters in professional and peer-reviewed publications, including 121 articles in peer-reviewed journals including the Journal of the American Medical Association,[12] the Journal of Adolescent Health,[13] the Annals of Internal Medicine[14] and the New England Journal of Medicine.[15]

Califano is the author of twelve books. In early 1969, he traveled around the world on a study of the "student-youth-and-establishment" problem under a Ford Foundation grant. He wrote about those travels in his book, The Student Revolution: A Global Confrontation, published by W.W. Norton in 1969. Califano's second book, A Presidential Nation, was published by W.W. Norton in 1975. His third, The Media and the Law, was published by Praeger Special Studies in 1976 and was co-authored and co-edited with Howard Simons, Managing Editor of The Washington Post. His fourth, The Media and Business, was published by Random House in 1978 and was also in collaboration with Mr. Simons.