The All India Football Federation (AIFF) is the organisation which manages the game of association football in India.[2] It administers the running of the India national football team and also controls the I-League, India's premier domestic club competition, in addition to various other competitions and teams.

The AIFF was founded in 1937, and gained FIFA affiliation in the year 1948, after India's independence in 1947. Currently it has office at Dwarka, New Delhi.

India was one of the founding members of the Asian Football Confederation in 1954.

On 23 June 1937 at the Army Headquarters, Shimla, the capital of the hilly state of Himachal Pradesh in India, the AIFF was formed at a meeting of the representatives of football associations of six regions where the game was very popular in those days. The six regions which attended that historic meeting were the Indian Football Association (IFA) (the ruling body of the game in Bengal), Army Sports Control Board, United Provinces, Bihar, North West India Football Association and Delhi. Before the birth of the AIFF, there was no properly constituted national organisation. However the IFA, the oldest association of its kind in the country, was recognised by football lovers throughout the country, as the ruling body of football in the country. So the AIFF had in the IFA a forerunner that dates backs to 1893. In its formative years Englishmen dominated the executive committee of the IFA. In fact the only Indian representative was Kalicharan Mitra from the Sobhabazar Club. Methodical organisation and sustained efforts to promote the game in Bengal, made the IFA the premier football body in the country in the early 20th century AIFF controlling body largely because the IFA was affiliated to the Football Association of England. Hence all foreign tours were conducted by the IFA. Also all the foreign teams negotiated with the IFA for visits to India and matches in Calcutta and other cities in India. AIFF also controls the ISL (Indian Super League) started in 2014 .

There were not very many football associations in the provinces of the country. The IFA, however, felt they should endeavour to form a national body. Accordingly, they invited representatives of other provincial football associations then in existence, at a conference in Darbhanga in 1935. The conference was presided over by the Maharaja Of Jitwariya, Late Dev Narayan Jha, then president of the IFA and representatives of IFA, Assam, Bihar, United Provinces, Delhi, Mysore and Bombay Presidency were present. The conference, however, proves abortive and a sharp difference of opinion cropped up with the result, the IFA delegates (late) SN Banerjee and (late) Pankaj Gupta left the conference in protest along with the Maharaja of Santosh.

The remaining delegates, however, formed a body and styled it as the "All India Football Association" with the Raja Bahadur of Darbhanga and Rai Bahadur JP Sinha honorary secretary. The IFA and the Army Sports Control Board did not join this body, and there had been a deadlock. The IFA, however, made another effort to dissolve the deadlock and sent Pankaj Gupta to Delhi to confer with Brigadier VHB Majendine, the then president of the Army Sports Control Board. This meeting took place in early March 1937, and Messrs Majendine and Gupta drew up a formula which ultimately led to the formation of the All India Football Federation.

The conference, accordingly, took place on 27 March 1937 at New Delhi. It was attended on behalf of the IFA by late SN Banerjee, Bar-at-Law (who subsequently became the president of IFA in 1940), Pankaj Gupta, who at that juncture was the joint honorary secretary of the IFA and HN Nicholls (vice president, IFA who subsequently became the president of IFA in 1939). Others to attend the conference were Badrul Islam (Delhi), HE Brandon (Bombay) and Rai Bahadur JP Sinha (honorary secretary, All India Football Association — AIFA) represented AIFA. Brigadier VHB Majendine presided at this meeting as chairman. At this conference it was agreed to liquidate the All India Football Association and instead to form an All India Football Federation with one representative from each affiliated association and two each from IFA and ASCB.

Messrs P Gupta and Brandon were entrusted to draft the rules of the new federation to be placed for consideration at the inaugural meeting to be held at Shimla on 23 June 1937. At this inaugural meeting the following office-bearers were elected: President: Brigadier VHB Mejendine, DSO (ASCB). Hon Secretary: Major A.C. Wilson (ASCB), Hon Treasurer: Pankaj Gupta (IFA).

After forming in 1937 it was not till 1948 when the AIFF were FIFA affiliated. The 1948 London Olympics was India's first major international tournament since the AIFF took charge, where a predominately barefooted Indian team lost 2–1 to France in the opening match, failing to convert two penalties. Sarangapani Raman scored the only goal for India in that match and thus the first Indian international goal ever.

1950. India were invited by FIFA and the Brazilian Football Federation to participate in the fourth World Cup in Brazil after a number of countries pulled out of the tournament that year, but the team couldn't take part as most of its players played the game barefooted, and, as per the stipulation of the world body, wearing shoes was mandatory. It was only in 1985 that India did attempt to qualify for the quadrennial event when they took part in the qualifiers for the 13th edition, in 1986, in Mexico. However, they failed to get beyond the first round. In fact, they have participated in the qualifiers regularly since 1994 but failed to get beyond the first round.[3]

On 28 September 2016, the new logo of the AIFF was unveiled by FIFA president Gianni Infantino.[4]

The State Associations have their own constitution and structure. Sometimes, their regulations are not in conformity with the AIFF regulations.

There is a lot of disparity in the functioning of the State Associations.

A few State Associations, which have the resources, have well equipped and well staffed office. Some have just one room office where the Secretary or any other office bearer comes after the office hours of his regular work/job. 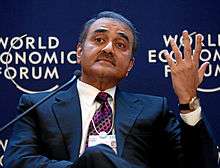 Praful Patel is the current President of the AIFF.