Kunsan K-8 Air Base is a United States Air Force base located at Gunsan Airport, which is on the west coast of the South Korean peninsula bordered by the Yellow Sea. It is at the town of Gunsan about 150 miles (240 km) south of Seoul. The town (군산시 in Korean) can be romanized as both Gunsan and Kunsan. The United States Air Force uses Gunsan to refer to the town, and Kunsan to refer to the base.

Kunsan Air Base is the home of the 8th Fighter Wing, "The Wolf Pack," assigned to the Pacific Air Forces Seventh Air Force and the 38th Fighter Group of the Republic of Korea Air Force. It is one of two major Air Force installations operated by the United States Forces Korea, the other being Osan Air Base.

The following major units are stationed at Kunsan Air Base: 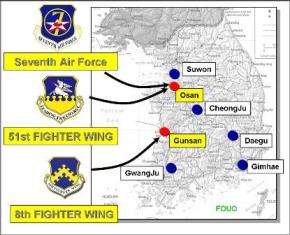 The history of Kunsan Air Base dates back to 1938, when Japanese forces occupying Korea built a base near Kunsan for fighter-interceptor aircraft.

The United States first used the base in 1945, but on a very small scale. From 1945 to 1950, the Army and later the Air Force intermittently operated small detachments from Kunsan, with these detachments maintaining liaison aircraft. At most these detachments contained a handful of people. When the United States pulled its combat units out of the Republic of Korea in 1949, it left only a Military Assistance Advisory Group in the country, and the periodic detachments at Kunsan became even more infrequent.

When the Korean War broke out on 25 June 1950, Kunsan Air Base had no United States flying units assigned. In their rapid advance, the invading North Koreans captured Kunsan Air Base on 13 July 1950.

The 24th Infantry Division retook Kunsan in October 1950, and the Chinese Communist Forces (CCF) Intervention Campaign that winter failed to push far enough south to put Kunsan in jeopardy. United States forces first operated in significant numbers from the base in 1951.

The first Air Force unit to be assigned to the base was the 27th Fighter-Escort Wing, which arrived on 1 April 1951. The 27th Fighter Escort Wing was one of the first F-84 units to see combat action in Korea and earned numerous honors and awards for their combat record during the Korean War.

Improvements to the base were needed, however, to accommodate jet fighters. The 27th FEW was reassigned at the end April and The Army's 808th Engineer Aviation Battalion built a 5,000 feet (1,500 m) runway to replace the sod runway constructed by Japanese. This runway is now known as Taxiway Charlie (06/24). By August, construction had progressed to the point that heavier units could be based at Kusan and the Air Force assigned the 3rd Bombardment Wing to Kunsan.

The 3rd Bomb Wing consisting of the 8th, 13th and 90th Bomb Squadrons flew the Douglas B-26 Invader bomber during the war, remaining at Kunsan from August 1951 until October 1954. A Marine aviation squadron, VMF(N)-513, arrived in April 1952, and a few months later the base added the 474th Fighter-Bomber Group, which included three squadrons of F-84 fighters, bringing the total size of the operation to one wing, one group, and a Marine fighter squadron. The 474th bombed and strafed such targets as bunkers, troops, artillery positions, bridges, vehicles, airfields, and power plants, and sometimes escorted bombers that attacked munitions factories and other objectives.

During the Korean War, the large number of locations used for bases and the similarity of some geographical names prompted the Air Force to use alphanumeric identifiers for bases in addition to their proper designations. Under this system, each base in Korea received a "K number," simplifying positive identification when referring to the various bases. Kunsan received the number K-8, while Osan Air Base was also known as K-55.

After hostilities ceased, the base began to draw down. The F-84 forces of the 49th Fighter-Bomber Wing left in November 1953, and by October 1954 the host unit of the base, the 3d Bombardment Wing, also departed. This left the base with a much-reduced mission. From 1953 to 1954, the 808th and 841st Engineering Aviation Battalions constructed what is today’s main runway. For the next several years Kunsan merely hosted periodic rotations of fighter and light bomber squadrons, with base facilities maintained and operated by an air base group. In 1957 and 1958, the 6170th Air Base Group began to upgrade base facilities, increasing the runway from 5,000 to 9,000 feet (1,500 to 2,700 m) and building new dormitories.

Until the late 1960s, though, Kunsan remained relatively dormant, hosting temporary deployments of flying units and serving as a safe haven base for aircraft evacuated from Okinawa and Guam during typhoons. In 1965, the Republic of Korea Air Force assigned a squadron of F-86 fighters to the base. This ROKAF unit was the only permanently assigned flying contingent at Kunsan until after the Pueblo incident in 1968.

At an unknown date in this time frame, the US Army 38th Air Defense Artillery Brigade assigned Battery B, 6th Battalion 44th Air Defense Artillery Group, a HAWK missile unit to Kunsan AB. The Tactical Operations site was located on a hill just off the coast, but near the base. Its mission was to defend the base from air attack. The Hawk site and all hardware was turned over to the Korean Army sometime in the early 1990s. After the Pueblo was captured by the North Koreans in 1968;the 4th Tactical Fighter Wing deployed to Korea on January 25, 1968; Under the command of Col. Jack Hayes; F-4Ds arrived at Kunsan on January 29, 1968. In March Col. Hayes was replaced by Col. Chuck Yeager, the 4th remained in Korea until replaced by 354th. The 354th Tactical Fighter Wing, consisting of the Kansas Air National Guard (ANG) and a few members of the DC-ANG flying the F-100 Super Sabre, arrived at Kunsan in July 1968, as part of the buildup of forces in Korea in the wake of the 1968 seizure of the USS Pueblo by the North Koreans. In 1969 the wing began a transition from the F-100 to the F-4 Phantom. The 354th remained until June 1970, when the base again returned to hosting temporary deployments, such as the four-month activation of the 54th Tactical Fighter Wing from June through October 1970.

In September 1974 the 8th Tactical Fighter Wing, the "Wolf Pack," was transferred from Ubon Air Base, Thailand to replace the 3rd at Kunsan. The move took place in name only, as the 8th moved without personnel or equipment, absorbing all assets of the 3d Tactical Fighter Wing. This included the two flying squadrons, which continued to operate as the 35th and 80th Tactical Fighter Squadrons, reuniting the wing with two of its original squadrons.

Since then, the 8th has continued to serve as host unit of Kunsan Air Base, continually improving the base’s facilities over the years.