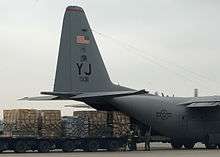 Airmen from the 374th Airlift Wing load supplies on to a C-130 Hercules for shipment to Niigata Airport on 18 July 2007. The 374 AW provided 10,000 pounds of water and 100 air conditioning units to the Government of Japan after an earthquake hit one of Japan's largest cities on the Sea of Japan. (U.S. Air Force photo by Senior Airman Veronica Pierce).

The 374th Airlift Wing (374 AW) is a unit of the United States Air Force assigned to Fifth Air Force. It is stationed at Yokota Air Base, Japan. It is part of Pacific Air Forces (PACAF).

The 374th Airlift Wing is the only airlift wing in PACAF and provides airlift support to all DoD agencies in the Pacific theater of operation. It also provides transport for people and equipment throughout the Kantō Plain and the Tokyo metropolitan area.

The Wing participates in operations involving air, land and airdrop of troops, equipment, supplies, and support or augment special operations forces, when appropriate. It fields a provisional airlift wing or group headquarters (when required) to command airlift resources as units in support of contingencies or exercises. It also supports assigned, attached, and associate units on Yokota Air Base and satellite installations according to higher headquarters' direction.

The 374th Airlift Wing has never been stationed in the United States.

The mission of the 374th Airlift Wing is to provide command and control of subordinate units for the execution of troop, cargo, military equipment, passengers, mail, and aeromedical evacuation/airlift to and from areas requiring such airlift.

The 374th Troop Carrier Wing was established on 10 August 1948 and activated on 17 August. It operated Harmon Field, Guam, until March 1949, and provided troop carrier operations in the Pacific and Far East. It moved to Japan in March 1949, and assumed control over Tachikawa (later, Tachikawa AB), operating this facility until 1 January 1956.

The 374th Wing operated Harmon Field, Guam from August 1948 though March 1949, and provided troop carrier operations in the Pacific and Far East. It moved to Japan in March 1949, and assumed control over Tachikawa (later, Tachikawa AB), operating this facility until 1 January 1956.

When the Korean War broke out in June 1950, the 374th was the only air transport group in the Far East. During the war, the combat components of the unit were:

The Wing's assigned and attached components flew a variety of aircraft, including C-54s, C-46s, C-47s, C-119s, and C-124s, performing combat airlift, airdrops, and aeromedical evacuation in Korea throughout the war.

The Wing performed routine transport operations. With assigned and attached components, the wing performed combat airlift, airdrops, and aeromedical evacuation in Korea throughout the war. For its work between 27 June and 15 September 1950, transporting vital cargo, personnel and evacuating wounded men, the 374th earned its fourth DUC.

Following hostilities, the wing resumed its normal troop carrier and airlift operations in the Far East and Pacific area, including participation in tactical exercises and humanitarian missions.

Beginning in January 1954, the 374th airlifted wounded French troops from Indochina to Japan, en route to France. Principal operations from 1955 until 1958 consisted of numerous mobility exercises, routine theater airlift, and occasional exercises throughout the Western Pacific region. It trained C-46 pilots of the Japanese Air Self Defense Force, from November 1954 through May 1955.

Nine years later, in August 1966, the 374th Troop Carrier Wing was reactivated at Naha AB, Okinawa as part of the 313th Air Division, and assumed a mission of airlift to Southeast Asia, as well as intra-theater airlift for elements of the Pacific Command. In addition, the wing supported Army Special Forces training, participated in tactical exercises, and flew search and rescue and humanitarian missions as needed.

The wing controlled four troop carrier squadrons, the 21st, 35th, 41st and 817th. The 21st included a special flight which supplied aircraft for CIA operations. The Wing also supported several special missions, including psy-ops, flare support, HALO and other missions, some of which were highly classified. In 1967 the troop carrier designation was replaced by "tactical airlift" throughout the Air Force. During the Vietnam War the 374th received the Presidential Unit Citation and the Air Force Outstanding Unit Award, complementing the three Distinguished Unit Citations it received in World War II.

On 12 May 1968 airlifters in Vietnam had their finest hour as they were called upon to evacuate the camp at Kham Duc. Although two C-130s, one of which was from the 374th, were shot down and others were damaged, they managed to bring out about half of the camps defenders while US Army and USMC helicopters brought out the remainder who did not exfiltrate out on the ground. Lt. Col. Daryl D. Cole was awarded the prestigious MacKay Trophy for the most meritorious flight of the year for flying his badly damaged C-130A out of Kham Duc. Lt. Col. John Delmore's crew crash landed at Kham Duc but were quickly rescued by US Army personnel.

The wing had no aircraft from 27 April to 31 May 1971. It was revived with new resources at Ching Chuan Kang Air Base Taiwan and remained heavily committed in support of operations in Southeast Asia during the Vietnam War, and also continued routine airlift in other areas. One of the wing's humanitarian missions-flood relief in the Philippines-earned it a Philippine Republic Presidential Unit Citation in 1972.

In the spring of 1972, after most American ground forces had been withdrawn, the North Vietnamese Communists launched a major offensive as they invaded South Vietnam during Easter. Communist troops supported by tanks and artillery rolled down Highway 13 toward Saigon, only to be halted after passing the town of An Lộc, which fell under siege. Airlift forces in Southeast Asia had been withdrawn, with only the 374th Tactical Airlift Wing remaining of what had been several wings of C-130s, C-123s and C-7s. Vietnamese C-123s attempted to supply the besieged garrison at An Lộc, but were unsuccessful in the face of the heaviest ground fire yet encountered in the Vietnam War. Helicopter resupply was impossible due to the proliferation of automatic weapons in the area. In desperation, Military Assistance Command, Vietnam, ordered the 374th to begin a resupply effort of the camp.

The wing provided support in March 1973 for Operation Homecoming, the repatriation of American prisoners from Hanoi, North Vietnam. In February 1973, the POWs, some of whom had been held since 1965, were finally released. Military Airlift Command was given the honor of bringing the POWs home, but the MAC C-141 Starlifter crews were upstaged by C-130 crewmen from the 374th TAW. In preparation for the release, several C-130 flights transported members of the negotiating team into Hanoi. On the day of the release two C-130 crews flew into Gia Lam Airport with members of the release team and an Air Force combat control team who brought in homing devices to help the MAC crews find the airfield. When the prisoners were released, the two C-130 crews were standing with nothing to do. Seeing that the first prisoners were the most badly injured, SSgt Ron Zogoda, a loadmaster, too the initiative as he stepped forward and took the arm of the first prisoner to be released, then escorted him across more than 100 feet of tarmac to where the MAC "freedom birds" waited. (The MAC C-141 crews were under strict instructions not to leave their airplanes.) The other members of the two crews followed Zgoda's lead. When the POWs got to their first stop at Clark AB, Philippines, they told Gen. William Moore, commander of 13th Air Force, how they appreciated the fact that the first Americans they talked too were combat crewmembers like themselves. Consequently, on subsequent releases, the C-130 crews were assigned escort duty with the returning prisoners.

The 374th maintained a forward operating location at Korat RTAFB Thailand until 1976. While American combat participation in the Vietnam War ceased with the 1973 ceasefire, airlift continued to play a role in the ongoing war in nearby Laos and Cambodia. Throughout 1974 and into 1975 the United States maintained a major airlift of supplies to the besieged Cambodian city of Phnom Penh. Fearful of the loss of an Air Force crew, the United States turned to the use of civilian contract crews, as they had done during the French IndoChina War. A company known as Bird Air (BirdAir) recruited former military airlifters to fly USAF C-130s provided "on loan" from the Air Force for the resupply effort. In spite of the airlift effort, Phnom Penh fell to the Khmer Rouge on 17 April 1975, only a few days before Saigon also fell, bringing the Vietnam War to a final conclusion.

On 31 March 1975, the 374th gained an aeromedical airlift mission in the Far East. In October 1978, it added a tactical airlift group to control the wing's units in Japan and South Korea, and continued controlling aerial port facilities in South Korea until November 1983, and then in the Philippines and Japan.

It began supporting US Navy elements in the Indian Ocean area in 1980. From 30 December 1990 through 6 July 1991, the wing deployed C-130s and associated aircrews and support personnel for operations in Southwest Asia, and from 8 June through 1 July 1991 provided airlift and aeromedical airlift for the evacuation of Clark AB, Philippines, after the eruption of Mt. Pinatubo.

On 1 April 1992 the 374th absorbed the personnel and mission of 475th Air Base Wing, which was inactivated under the "one base-one wing" organizational concept and became the host unit at Yokota. From 1992 to present, the 374th Airlift Wing conducted special operations, aeromedical evacuations, search and rescue operations, humanitarian relief and theater airlift missions in support of US and UN security interests throughout the Far East.

In 1996, the 374th deployed portions of the Air Transportable Hospital to Andersen AFB, Guam to assist in Operation Pacific Haven, transportation of more than 2000 Kurdish nationals. Deployed to Utapao RTAFB, Thailand from 28 December 2004 though 26 January 2005 as part of Operation Unified Assistance, distributing humanitarian supplies to people and eleven nations devastated by an earthquake triggered tsunami.