A Japan Air Self Defense Force F-2 fighter taxi's to join nine other F-2s which arrived here 30 January for the 2009 Cope North Exercise. The F-2s are from the 6th Squadron, Tsuiki Air Base, Japan.

The United States Air Force's 36th Wing is the host wing for Andersen Air Force Base, Guam. It is part of United States Pacific Air Forces Eleventh Air Force. The 36th Wing provides day-to-day mission support to more than 9,000 military, civilian, dependent and retired personnel and 15 associate units on the base.

The 36th Wing's and Andersen Air Force Base's official mission statement is "...to employ, deploy, integrate and enable air and space forces from the most forward US sovereign Air Force Base in the Pacific."

Assisting the 36th Wing in accomplishing this mission is the 734th Air Mobility Squadron, which operates Andersen's air cargo terminal on behalf of Air Mobility Command.

On 2 July 1948 the United States Air Force 36th Fighter Wing was activated at Howard Air Force Base. The former USAAF 36th Fighter Group became the operational component of the new Air Force wing. Active squadrons of the 36th were:

Republic F-84E-10-RE Thunderjet Serial 49-2299 of the 23d Fighter-Bomber Squadron, 1951, flown by the Wing Commander Col. Robert L. Scott. Note the 23d Fighter Group emblem on the nose, as Col. Scott was a "Flying Tiger" in China during World War II.

F-15s of the 53d and 525th Tactical Fighter Squadrons returning to Bitburg Air Base after being deployed in support of Operation Desert Shield/Storm, 13 March 1991.

As a result of the Berlin Blockade and other Cold War tensions in Europe, the 36th Fighter Wing was reassigned to USAFE. The squadron was assigned to Fürstenfeldbruck Air Base West Germany on 13 August 1948, being the first USAFE unit to be jet-equipped with the Lockheed F-80 "Shooting Star". At Fürstenfeldbruck tactical operations included air defense, tactical exercises, maneuvers, and photographic reconnaissance. In May 1949, the wing formed the Skyblazers aerial demonstration team, which it controlled until August 1952, and again from October 1956 to January 1962 when it was disbanded.

On 20 January 1950, the wing was redesignated as the 36th Fighter-Bomber Wing (FBW) when 89 Republic F-84E "Thunderjets" arrived. Existing USAFE bases in West Germany, however, were deemed very vulnerable to an attack by the Soviet Union, given their proximity to East Germany and other Warsaw Pact nations. Negotiations with other NATO nations were made to build new bases west of the Rhine River. The F-80s were sent back to CONUS to equip Air National Guard units. In addition to its primary installation at Fürstenfeldbruck, the wing controlled Oberpfaffenhofen AB, West Germany, December 1949 – February 1950.

The 36th FBW remained at Fürstenfeldbruck until 1952 when it was reassigned to the new Bitburg Air Base, in the Eifel mountains west of the Rhine River. Throughout the summer, elements of the 36th FBW moved into Bitburg, with the wing officially arriving in November 1952. Under various designations, the 36th would remain at Bitburg for the next 40 years.

In August 1953, the North American F-86F "Sabre" was introduced to the wing, replacing the F-84s. On 31 March 1954, The 1st Pilotless Bomber Squadron, equipped with the B-61A Matador, was assigned to the 36th Fighter Bomber Wing, Bitburg Air Base, Germany, making it the first operational U.S. missile unit. The 1st PBS eventually was renamed to Tactical Missile Squadron (TMS), and in 1958 was renumbered to the 71st TMS and the unit was assigned to the 701st TMW at Hahn, although stationed at Bitburg Air Base.

In August 1954, the wing was redesignated as the 36th Fighter-Day Wing.

In May 1961, the wing received the Republic F-105 "Thunderchief". Formal USAFE acceptance of the Mach 2 fighter-bombers was held at the Paris Air Show on 3 June 1961. Deliveries of the F-105D model were completed in 1963, and the 36th carried on its Cold War mission of tactical nuclear weapons delivery. Twice in the early 1960s when Cold War tensions were elevated due to the 1961 Berlin Wall crisis and 1962 Cuban Missile Crisis the 36th TFW rose to a high level of alert.

By 1966 the Thud was being phased out of NATO, being replaced by the McDonnell F-4D "Phantom II". The tactical nuclear deliver mission, still necessary, was being eclipsed by the ability of ICBMs and the primary mission of the 36th TFW changed to Tactical Air support of NATO ground units in West Germany. By December 1966, all the 36th TFW Thuds had been ferried Stateside for combat crew training duties at McConnell AFB, Kansas, or on to warfighting glory in Southeast Asia after stateside refurbishment.

In September 1969, the 36th TFW took responsibility for Spangdahlem Air Base West Germany until December 1971.

By 1976 a major modernization of USAFE was necessary. The Soviet Union's new generation of MiG and Sukhoi fighters made NATO military planners anxious. Indeed, intelligence reports about the MiG-25 left little room for comfort; the performance of this latest Russian combat aircraft was far superior to any NATO aircraft. The twin-engined MiG-25 reached speeds of over 3,000 km/h even at high altitude (over 70,000 feet) and it could be armed with radar-guided AA-6 Acrid air-to-air missiles. When the Soviets stationed large numbers in the Soviet Union and later in the GDR, NATO had to address this problem.

The solution was provided by the McDonnell Douglas F-15 Eagle. Just like the MiG-25 it has two powerful engines and a double tail fin. The 23 aircraft for the first operational squadron (525 TFS) with the 36th TFW left Langley AFB on 27 April 1977 for a mass Atlantic crossing. Over the following months the aircraft for two other squadrons (22nd TFS and 53rd TFS) arrived. The 36th TFW's full strength of 79 fully operational F-15As was reached in December 1977. In 1980 more advanced F-15Cs and F-15Ds would replace the original F-15As.

Throughout the 1970s and 1980s, the 36th TFW conducted routine training missions however the outbreak of the 1990–91 Gulf War put the F-15s of Bitburg into the heart of the conflict. The 36th TFW's pilots and aircraft performed magnificently in Operation Desert Storm. Not a single F-15 aircraft was lost in combat during the war. On 13 March 1991, the deployed squadrons of the 36th TFW returned in victory.

The celebration was brief, however, as the 36th TFW deployed back Incirlik Air Base, Turkey to support Operation PROVIDE COMFORT. Between 5 April and 25 May 1991, the 36th TFW flew 285 sorties over Iraq. Just as before, not a single aircraft was lost in Iraq due to hostile fire.

On 1 October 1991 the wing was redesignated as the 36th Fighter Wing when the objective wing concept was implemented.

The 525th Fighter Squadron was inactivated 31 March 1992 as part of the initial post Cold-War drawdown.

Bitburg Air Base was part of the 1993 Base Realignment and Closure (or BRAC) process that saw the drawdown of many military facilities in a series of post-Cold War force reductions. In July 1993, HQ USAFE announced the closure of Bitburg Air Base and the pending inactivation of the 36th Fighter Wing.

The Wing was reactivated without personnel or equipment at Andersen AFB, Guam the same day as the 36th Air Base Wing, a non-flying organization taking over as the host unit. The former host unit, 633d Air Base Wing was inactivated in keeping with the Air Force Chief of Staff's policy of keeping the most highly decorated and longest serving Air Force units on active duty.

The wing's combat readiness was tested between December and March 1991 during a deployment to Southwest Asia as part of Operations Desert Shield, Desert Storm and Proven Force. While flying combat air patrols during the war, the F-15s of the 36th were a strong deterrent to the air forces of Iraq. During Operation Desert Storm, the 36th was credited with downing 17 enemy aircraft in air-combat engagements. On 1 October 1991, the 36th Tactical Fighter Wing was redesignated the 36th Fighter Wing, and in July 1994, the 36th Fighter Wing was inactivated.

The 36th Air Base Wing was activated at Andersen Air Force Base, Guam, on 30 September 1994. Under that designation, the wing lived up to its mission several times. In September 1996, the wing provided around-the-clock forward-deployment support to Air Combat Command B-52s during their Operation Desert Strike missions over Iraq, and began hosting more than 6,600 Kurdish evacuees during the 8-month humanitarian assistance mission, Joint Task Force Pacific Haven.

On 12 April 2006, Andersen AFB's host unit, the 36th Air Base Wing was officially redesignated as the 36th Wing. Prior to the redesignation, the wing had been using a temporary designation of air expeditionary wing. The change in the wing's official designation was meant to better align Andersen with its mission statement: "To provide a U.S.-based lethal warfighting platform for the employment, deployment, reception, and throughput of air and space forces in the Asia-Pacific region." 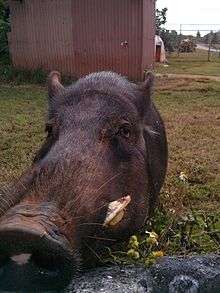 Shakey the Pig is the name given to the wild boar mascot of 36th Munitions Squadron at Andersen AFB. The first boar given this name was captured in the 1980s from the jungle near the munitions flight storage area, with the intention of slaughtering the animal and cooking it on a barbecue. The airmen relented and kept it as a mascot. When the incumbent mascot dies, another is caught from the jungle to take its place. It is rumoured that some Shakeys "were the guests of honor at more barbecues than people might imagine" and MSgt David Torelli has said at least one Shakey "was the main course at a local wedding dinner."[1]