Yokota Air Base (横田飛行場, Yokota Hikōjō), (IATA: OKO, ICAO: RJTY) is a United States Air Force base in the city of Fussa, one of 26 cities in the Tama Area, or Western Tokyo.

The host unit at Yokota is the 374th Airlift Wing and is currently used for airlift missions throughout East Asia. The 374th includes four groups: operations, mission support, maintenance and medical. Each group manages a various number of squadrons in order to carry out the wing's mission. 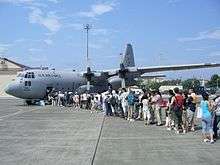 The newly renovated Air Mobility Command (AMC) Passenger Terminal is on the main part of the base next to the flightline. It is a 5- to 7-minute walk from the Kanto Lodge (see below) and offers Space-Available flights to various destinations in PACAF such as Alaska, Guam, Hawaii, Korea, Okinawa, Singapore, as well as the Contiguous United States.

The facility which houses Yokota Air Base was originally constructed by the Imperial Japanese Army in 1940 as Tama Airfield, and used as a flight test center. During World War II Yokota became the center of Japanese Army Air Forces flight test activities and the base was the site of the first meeting between Japanese and Italian wartime allies.

Tama was first identified by United States military forces in November 1944 by a 3d Reconnaissance Squadron F-13 Superfortress photo-reconnaissance aircraft, flying from Tinian in the Marianas. It was identified as being associated with a nearby Musashino-Nakajima aircraft manufacturing plant. Along with the Showa Air Base to the northwest, and Tachikawa Air Base to the east, it was compared to the aircraft development complex of the USAAF Wright-Paterson Field in Ohio. According to the USAAF intelligence at the time, the three bases conducted all IJA flight testing. In the spring of 1945, XXI Bomber Command attacked the base eight times along with the aircraft manufacturing plant, but each time heavy clouds forced the bombers to attack secondary targets. The Nakajima plant was finally attacked in April 1945, but the Tama airfield never was bombed.

With the end of hostilities and the Japanese surrender in September 1945, a detachment of the United States Army 1st Cavalry Division arrived at the base on 4 September. The airfield's buildings were largely intact, and some 280 of the IJA's most modern aircraft were discovered in hangars. The 1st Cav named the facility Fussa Army Airfield, then at the end of September renamed it Yokota Army Airfield (the name appeared on a 1944 US map, taken from a village which has since been incorporated in neighboring Mushimurayama.)

The initial USAAF use for the base was for airlift operations when the 2d Combat Cargo Group arrived with four C-47 Skytrain squadrons. When the old runway deteriorated under heavy usage, the runway was repaired and Yokota supported operations of the Douglas A-26 Invader-equipped 3d Bombardment Group by August 1946. Additional construction during the 1940s and 1950s was completed and the base reached its current size around 1960.

On the occasion of extension, the course of Hachiko Line and national highway Route 16 was changed, and Itsukaichi highway was divided.

These units performed photographic reconnaissance and mapping of Japan and South Korea.

During the Korean War, Yokota was used for combat missions over North and South Korea. Known units based there were:

About 1956 the B-29's began to be replaced with B-50's, and the unit continued to fly two missions a day, plus flying into any typhoons in the South Pacific. In 1956 the 56th lost a plane coming back from a mission, as it crashed into a hill not far from the base. All on board were killed.

With the hostilities in Korea ending in 1953, Yokota Air Base returned to a peacetime Cold War status. Two major wings were stationed at the base during the 1950s, the 67th Reconnaissance Wing (1956–60) flying RF-80s, RF-84s and lastly RF-101s. The 35th Fighter-Interceptor Wing (1954–57) flew F-86 Sabres from the base. A Tactical Air Command air refueling unit, the 421st Air Refueling Squadron Flew KB-29s,and later KB-50Js from Yokota from 1953-65. All of these units were under the command of the 41st Air Division.

The 35th TFW was reassigned in 1957 and the 67th TRW in 1960. Worldwide DOD Budget restrictions in the late 1950s caused several PACAF wings based in Japan to be reassigned or inactivated. These tactical fighter units were replaced by the Martin B-57 equipped 3rd Bombardment Wing where it trained in bombardment, reconnaissance and aerial refueling operations. The Air Defense Command 40th Fighter-Interceptor Squadron (December 1961 - May 1962) equipped with the Convair F-102 Delta Dagger stood an air defense mission.

The 6102d Air Base Wing assumed host unit status for the base, being replaced by the 441st Combat Support Group in 1964.

The Vietnam War resulted in an increased combat and airlift aircraft presence at the base. Yokota was used for ferrying B-52s to Southeast Asia along with being a base for US-based deployed F-105 Tactical Fighter Squadrons (35th, 36th, 80th). The 610th Military Airlift Support Squadron (1966–78) was created by Military Airlift Command to service the large increase in transiting airlift. The 65th Military Airlift Support Group (1969–71) was a headquarters organization for MAC airlift support squadrons in the Pacific and Far East.

The F-105 squadrons deployed frequently to USAF-operated bases in Thailand to fly combat missions over North and South Vietnam, and to South Korea for alert missions. Initially the fighter squadrons were under the command of the 41st Air Division, shortly after reassigned to the 6441st Tactical Fighter Wing, activated in April 1965 to control the F-105 squadrons after their parent organization, the 8th Tactical Fighter Wing, relocated to George Air Force Base, California, to become a McDonnell Douglas F-4 Phantom II unit. With the reassignment of the 347th Fighter Wing to Yokota in 1968, the 347th assumed responsibility for all tactical fighters until its reassignment to Kunsan AB, South Korea, in March 1971.

In 1971, all combat squadrons were transferred to Kadena and Misawa Air Base and Yokota became a non-flying station hosted by the 475th Air Base Wing. The 475th had no numbered flying squadrons, but operated a few T-39 Saberliners and UH-1 helicopters, along with supporting transient MAC cargo and passenger aircraft. Assigned flying squadrons returned to Yokota in 1975 when the 345th Tactical Airlift Squadron was assigned with its C-130Es.

Headquarters, Fifth Air Force was transferred to Yokota on November 11, 1974, being transferred from Fuchu AS, Japan.

In 2005, the Japanese government announced that the headquarters of the Japan Air Self-Defense Force would be moved to Yokota.

The Tokyo Metropolitan Government has advocated opening Yokota to civilian flights as a method of relieving traffic at Haneda and Narita Airport. Governor Shintaro Ishihara raised the joint-use proposal during the 2003 gubernatorial election, and Governor Naoki Inose made comments in 2013 that suggested joint use as a possible solution to cope with visitor demand during the 2020 Summer Olympics in Tokyo.[3]

In November 2009, the base was under attack by leftist extremists via improvised mortar barrages.[4]

In April 2010 Colonel Frank Eppich, the United States Air Force commander of base, banned screenings of the film The Cove at the base theater. A base spokesman said that The Cove was banned because using a base venue to display the film could be seen as an endorsement of the film. The spokesman added, "We have a lot of issues with Japan...and anything done on an American base would be seen as an approval of that event."[5]

Personnel and aircraft from the base assisted with Operation Tomodachi following and during the March 2011 Tōhoku earthquake and tsunami and Fukushima I nuclear accidents. The base also served as an important hub for airlifted assistance during the disaster recovery efforts. During the crisis, around 600 American family members voluntarily departed the base for locations outside Japan.[6]

Resistance to the air base immediately followed the end of US occupation. Gravel used in the construction of the airfields was taken from the Tama River, lowering the riverbed and affecting the traditional irrigation system (Fuchū-yōsui), which had provided water to local communities since the early Edo period. The base also caused great stress to nearby inhabitants in a number of other ways, such as fuel leaks and spills that contaminated groundwater and well water; foul odors and fires, deafening noise pollution and repeated plane crashes.[7] Although local leaders succeeded in bringing about the return of land that had been taken for a base in Tachikawa, at Yokota the number of departures and landings per year reached 20,000. Pilot training that simulated landing jets on aircraft carriers was also held several times each year, often throughout the night.[8] Because such training, together with the engine testing and daily flights, created a level of noise pollution that local inhabitants found unbearable, numerous lawsuits were filed against the Japanese and U.S. governments, calling for a halt in flights and compensation for damages caused by the noise pollution.[9] At present, a small fraction of the compensation demanded for past damages appears likely to be awarded. “Yokota Airbase Pollution Lawsuit No. 9,” filed on December 12, 2012 and “New Yokota Airbase Pollution Lawsuit No. 2,” filed on March 26, 2013, are currently being disputed. 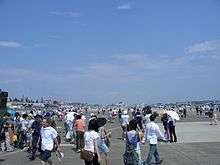 Each year in September, Yokota Air Base opens the gates to the Japanese community for its annual Friendship Festival. For two days, local residents can learn about Yokota Air Base. Food and events are provided for all ages. Roughly 200,000 visitors show up each year, although non-Japanese visitors may be turned away from the gates for security reasons.

For those two days, visitors are able to examine many types of aircraft and even tour some of the large cargo planes from inside.

The Department of Defense Education Activity operates schools at Yokota for children of personnel assigned to the base. [11]

Higher educational opportunities for those in the military and working for the Department of Defense, as well as for family members at Yokota are available through several contracted academic institutions. For example:[16]

The Tama Hills Recreation Area comprises about one-half of the 500-acre Tama Services Division Annex, the other half being the Tama Hills Golf Course.[18][19][20]

The base was the setting of Almost Transparent Blue, a best-selling novel written by Ryu Murakami and published in 1976 as well as the anime Blood the Last Vampire and the short film "Baby Blue" from Genius Party, directed by Shinichiro Watanabe (Cowboy Bebop, Samurai Champloo). Yokota Air Base and its surrounding area were the central location for the 2006 movie Sugar and Spice. It is also the setting of parts of The Yokota Officers Club : A Novel by Sarah Bird. The base is also the birthplace of US Marine Captain, former UFC fighter and Fox Sports analyst Brian Stann. The base was also briefly featured in the 2016 biopic Snowden as one of Edward Snowden's workplaces.

This article incorporates public domain material from the Air Force Historical Research Agency website http://www.afhra.af.mil/. Some of the text in this article was taken from pages on the Yokota Air Base website, which as a work of the U.S. Government is presumed to be a public domain resource. That information was supplemented by: