The 51st Fighter Wing (51 FW) is a wing of the United States Air Force and the host unit at Osan Air Base, South Korea. The wing has been based entirely in the Far East during its entire existence, including its combat role was as the 51st Fighter-Interceptor Wing during the Korean War.

The 51st Fighter Wing is under Pacific Air Forces' Seventh Air Force. The unit is the most forward deployed wing in the world, providing combat ready forces for close air support, air strike control, counter air, interdiction, theater airlift, and communications in the defense of the Republic of Korea. The wing executes military operations to bed-down, maintain and employ follow-on forces for the combined arms base that includes three major flying tenants and large multi-service fighting units.

The wing is equipped with General Dynamics F-16 Fighting Falcon and Fairchild Republic A-10 Thunderbolt II squadrons and myriad base support agencies conducting the full spectrum of missions providing for the defense of the Republic of Korea.

The mission of the 51st FW is to provide mission-ready Airmen to execute combat operations and receive follow-on forces. The wing accomplishes this mission through:

The 51st Fighter Wing is composed of four groups each with specific functions. The Operations Group controls all flying and airfield operations. The Maintenance Group performs maintenance of aircraft, ground equipment and aircraft components. The Mission Support Group has a wide range of responsibilities but a few of its functions are Security, Civil Engineering, Communications, Personnel Management, Logistics, Services and Contracting support, whilst the Medical Group provides medical and dental care.

With the outbreak of the Korean War in 1950, elements of the 51st FIW were dispatched first to Japan, then to South Korea. Korean War operational squadrons were:

It entered combat service flying the F-80C Shooting Star on 22 September of that year, when it moved to Itazuke AB, Japan, to support the breakout of the Eighth U.S. Army from the Pusan Perimeter. For nearly 4 years thereafter, the 51st FIW played a key role in the defense of South Korea despite moving to four different locations within a year and operating under austere conditions.

The wing moved to South Korea in October only to return to Japan in December, leaving combat elements behind. In May 1951, the 51st FIW moved to Suwon Air Base, southwest of Seoul, but retained maintenance and supply elements at Tsuiki AB, Japan, to provide rear echelon support. In November 1951 the 51st FIW transitioned to the F-86 Sabre with two squadrons (16th, 25th), adding a third squadron (26th) the following May.

The group operated a detachment at Suwon AB, Korea, beginning in May 1951, and relocated there in October 1951, with maintenance and supply elements remaining in Japan until August 1954. The wing ceased combat on 27 July 1953. The 51 FIW's war record was impressive. Wing pilots flew more than 45,000 sorties and shot down 312 MiG-15s; this produced 14 air aces including the top ace of the war, Captain Joseph C. McConnell. The ratio of aerial victories to losses was 10 to 1. Unfortunately, the wing lost 32 pilots to enemy action; however, nine that became prisoners of war were repatriated later. 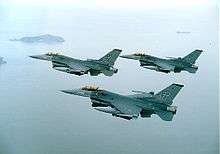 On 1 August 1954, the 51 FIW returned to Naha Air Base to resume air defense coverage of the Ryukyu Islands. Operational squadrons were:

At the same time, the wing demonstrated its mobility readiness in response to three regional crises.

During the Vietnam War, crews of the 51st Fighter Interceptor Wing provided air defense of Naha AB, Okinawa, with F-102s. During the 1968 Pueblo crisis, the wing deployed 12 of is 33 aircraft to Suwon AB. On 31 May 1971, the 51st FIW was inactivated, ending almost 17 years of service in the Pacific from Naha when it was inactivated as the Air Force began scaling down its activities in Southeast Asia. In 1975 Naha Air Base closed.

The 51st was inactive for only five months. On 1 November 1971, the wing was redesignated the 51st Air Base Wing and activated at Osan Air Base, South Korea. At Osan, the 51st assumed the host responsibilities of the inactivated 6314th Support Wing at to include the Koon-ni range and a variety of remote sites. Operational squadrons of the 51st at Osan have been:

On 1 October 1993, after a half-dozen name changes, the wing returned to its original and current designation as the 51st Fighter Wing. Since then, the 51st has stayed true to its proud heritage, ensuring the defense of South Korea as a proven combat force and as an able host ready to receive and integrate follow-on forces on the peninsula.

The list of commanders for the 51st Fighter Wing and its predecessors includes a wartime hero, Colonel Francis Gabreski, and an aviation pioneer, Tuskegee Airman Colonel Benjamin O. Davis Jr. [3]

Colonel Benjamin O. Davis, Jr., commander of the 51st FIW, leads a formation of F-86F Sabres over Korea in 1954