Kusatsu (草津町, Kusatsu-machi) is a town located in Agatsuma District of far western Gunma Prefecture in the northern Kantō region of Japan. As of February 2015, the town had an estimated population of 6,537 and a population density of 131 persons per km². Its total area was 49.75 km². Kusatsu is one of the most famous hot springs resorts in Japan,

Kusatsu is situated about 1,200 meters above sea level. The active volcano Kusatsu-Shirane (2,160 m) and the inactive Mount Tengu (1,385 m) and Mount Motoshirane (2,171 m) are located west of Kusatsu.

Due to the altitude Kusatsu's annual average temperature is 7 °C, with a maximum temperature of around 30 °C during summer and a minimum temperature of -14 °C in winter. The main rainy season is from June to September. During the winter season the streets are kept free of snow using onsen water.

The legendary origin of Kusatsu goes back to the second century during the Yayoi period. According to the legend, either Yamato Takeru or Yamabushi discovered the hot springs around Kusatsu; however, there is no historical evidence for either claim. Per legend, Yamato Takeru named Tsumagoi and Agatsuma after his wife ("tsuma" means "wife" in Japanese).

Up to the 12th century there is no specific record of Kusatsu. Local folklore recounts that Minamoto Yoritomo came to Kusatsu in 1193 in pursuit of fleeing Taira clan warriors. He then bathed in the Yubatake. The Gozaishi (御座石, illustrious seat, royal seat) on which Yoritomo sat, and the Yoritomo-gū (頼朝宮, Yoritomo Palace) in which he is said to have bathed, still exist. Kusatsu's history began in 1200 when the temple of Kōsenji was founded.

Almost 400 years later, during the Sengoku period, there is more evidence for the existence of Kusatsu, which had grown into a hot-springs resort popular with wounded samurai. The Tokyo University Historiographical Book of Facsimiles (東大史料編纂所影写本, Tōdai shiryō hensanjo eishabon) contains correspondence during the year 1595 (Bunroku 4) between Tokugawa Ieyasu and Toyotomi Hideyoshi in which Hideyoshi recommended the Kusatsu hot springs to Ieyasu. The latter however, did not go to Kusatsu himself, but sent some servants to fetch some water from Kusatsu instead.

During the Edo period, especially the Bakumatsu period, Kusatsu experienced unprecedented economic growth and became one of Japan's best-known hot springs. This was partly due to the increasing incidence of venereal diseases like gonorrhoea and syphilis, contracted in Tokyo red light districts like Yoshiwara, for which there was then no known cure besides bathing in a hot spring. The saying: "Kusatsu sengen Edo gamae" (草津千軒江戸構え) also goes back to this time and means: a thousand stores, just like in (the shopping districts in) Edo. 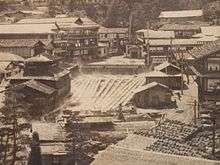 Yubatake at the beginning of the 20th century

Hearing the praise of the Kusatsu Onsen the 8th Shogun Tokugawa Yoshimune had hot-spring water drawn from the Yubatake source and transported into his castle for bathing. The area of present-day Kusatsu was part of the hatamoto-administered territory within Kōzuke Province during the Edo period.

In 1869, Kusatsu burned to the ground. The town was reconstructed within a few years, but the process left many local people in debt, causing the bankruptcy of many small enterprises, especially ryokan, over the next 20 years. At that time many of the inhabitants of Kusatsu abandoned the traditional practice of "Fuyuzumi" (冬住み), which meant leaving Kusatsu in wintertime and returning to their hometowns, located further down the mountains. Instead, the townspeople sold their old homes to repay their debts and began to live in Kusatsu all year long.

Kusatsu Village was created within Agatsuma District of Gunma Prefecture on April 1, 1889 by the merger of former Kusatsu with Maeguchi and six other hamlets, with the creation of the municipalities system after the Meiji Restoration. On July 1, 1900 the former Kusatsu and Maeguchi portions of the village was raised to town status, and the remaining portion formed Kuni village.

The infrastructure developed in the Meiji period and also people`s knowledge, therefore many famous people were visiting Kusatsu. Especially foreigners were scientifically interested in this area, which became an important area for research of effects of hot springs, volcanoes etc.

In 1876, Erwin Bälz, a German internist came to Kusatsu for the first time. Bälz was one of the fathers of modern western medical science in Japan and court physician to Emperor Meiji. He was convinced of the healing power of the hot springs in Kusatsu, and began scientific research into them with a view to convincing the townspeople of the need to teach the correct application of the hot springs to Japanese medical doctors.

The year 1915 saw the first visit of British Anglican missionary, Mary Cornwall Legh. In 1916 Cornwall Legh using her own funds established the St. Barnabas' Mission, providing residential care facilities to the sizable population of Hansen's Disease sufferers then present in the Yunosawa area of Kusatsu. Cornwall Legh devoted her remaining years to the care of the Kusatsu leprosy community, her work and dedication to this cause recognized with honors by the Japanese Government.[2]

In 1941 the St. Barnabus' Hospital was closed, replaced by the, subsequently notorious, government run Kuryu Rakusen-en Sanatorium. St. Barnabus' Church and Cornwall Legh Park in Kusatsu attest to the charitable legacy of Mary Cornwall-Legh and the history of the community she sought to serve.[3]

In 1926, the construction of the Kusakaru railway line (草軽電気鉄道, Kusakaru denki tetsudō) between Kusatsu and Karuizawa, which had been begun in 1908 was finished.

In 1948, a ski lift was erected on Mount Tengu, near Kusatsu. It was the first ski lift in Japan, with Kusatsu going on to become one of the country's first proper ski resorts.

In 1964, rail services to the town ceased after the closure of the nearby sulfur pit and the ensuing loss of freight traffic, which made operation of the line uneconomic.

The town's main income is tourism (about 90% of the working population is employed in the tertiary sector), primarily in connection with its hot spring resorts, with very little industry and almost no agriculture.

There are about 100 hot springs in Kusatsu with a total amount of about 34,000 liters water per minute pouring out of the ground. The water is sulfurous and acidic. The hot springs are said to help cure: arthralgia, stiff shoulders, paralysis, hardenings, bruises, sprains, chronic indigestion, hemorrhoids, chills, arteriosclerosis, burns, chronic gynecological disorders. The water from the natural hot springs is used not only for bathing but also for heating of the city's primary and secondary schools, the municipal welfare center, the streets during winter and many households, as well as for the municipal swimming pool. 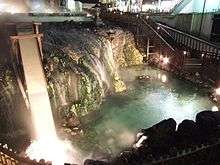 The Yubatake, one of the biggest hot springs and the main attraction of the town, is located in the center of Kusatsu. The spring water pours out of the rock and is then conducted through several rows of wooden boxes. In these wooden boxes Yu no hana (湯の花) one of Kusatsu's specialties is cultivated. The word Yubatake accordingly means "hot water field". Around the Yubatake there are 100 name plates of famous persons that visited Kusatsu. Internationally well-known are: Erwin Bälz (German internist), Julius Scriba (German surgeon), Bruno Taut (German architect), Ernest Satow (British researcher of Japan and diplomat), Kakuei Tanaka (Japanese prime minister 1972 - 1974), Rikidōzan (famous pro wrestler). On the lower part of the Yubatake there is a small cascade and the rock has an emerald shade. This is one of the most popular spots for souvenir pictures. 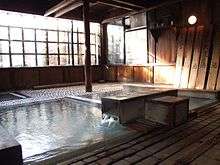 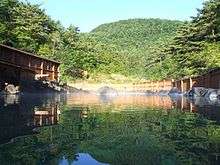 The Bälz Museum is another of Kusatsu's attractions. Located at the entrance to Kusatsu, visitors can inform themselves about the life and work of Erwin Bälz. There is also a souvenir shop with goods mostly from Germany and the Czech Republic. 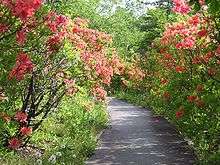 Another of Kusatsu's attractions are the mountain flowers growing in and around the city. The most famous are: 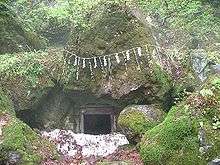 During the year there are a number of traditional festivals as well as a number of events. 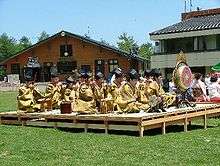 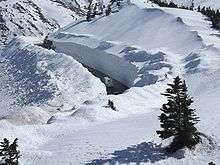 The Thespakusatsu Gunma football club, although formed in and representing Kusatsu in the Japanese football league system, actually plays in Maebashi. 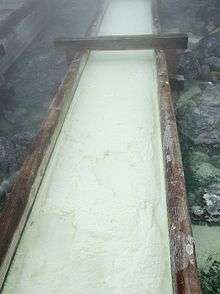 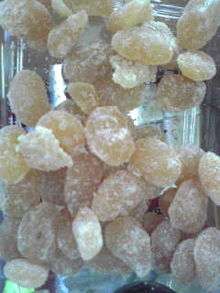 There are a number of waterfalls and crater lakes in the vicinity of Kusatsu. The most famous ones are:

The Kusatsu international ski area (草津国際スキー場, Kusatsu kokusai sukijō) on Mount Tengu and Mount Shirane is over 90 years old and is one of the main attractions of Kusatsu. The ski area extends from 2,100 meters to 1,300 meters above sea level. The snow quality is very good and there are ten different routes for all difficulty levels as well as twelve lifts. The longest route is eight kilometers long.