Not to be confused with Ōta, Tokyo.

Ōta (太田市, Ōta-shi) is a city located in southeastern Gunma Prefecture in the northern Kantō region of Japan .[1] As of February 2015, the city had an estimated population of 75,560 and a population density of 1260 persons per km². Its total area was 60.97 km². 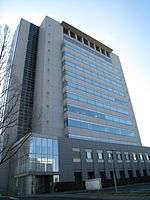 During the Edo period, the area of present-day Ōta contained two post towns on the Nikkō Reiheishi Kaidō, a subroute to Nikkō Kaidō which connected the Nakasendō directly with Nikkō, bypassing Edo.,[2] the Ōta-shuku (太田宿), (from which the city takes its name) and Kizaki-shuku (木崎宿).[1]

During the years before World War II, airplane production was the industrial mainstay of Ōta. After the war, much of the skills and technology used in the production of aircraft was redirected into the production of automobiles. Ōta's leading industry is manufacturing, centered in the southeast part of the city. Ōta leads the prefecture in manufacturing revenue, which exceeds ¥1.3 trillion annually. It is the home of the car manufacturer Subaru, a subsidiary of Fuji Heavy Industries, Ltd. Subaru-chō is where the Subaru BRZ/Toyota 86 is built, having been re-purposed from kei car production, Yajima Plant is where all current Subaru cars are built, Otakita Plant is where commercial kei trucks are built (originally the location of Nakajima Aircraft), and Oizumi Plant is where engines and transmissions are built.[3]

The northern part of Ōta is characterized by its farms, most of which produce rice. Also, Ōta is a major transportation hub in the Tomo (Eastern Gunma) region and the home of the Panasonic Wild Knights rugby team.