Mannar District (Tamil: மன்னார் மாவட்டம் Maṉṉār Māvaṭṭam; Sinhalese: මන්නාරම දිස්ත්‍රික්කය) is one of the 25 districts of Sri Lanka, the second level administrative division of the country. The district is administered by a District Secretariat headed by a District Secretary (previously known as a Government Agent) appointed by the central government of Sri Lanka. The capital of the district is the town of Mannar.

Between the 5th century BC and 13th century AD, what is now Mannar District was part of Rajarata. Parts Mannar District were thereafter part of the pre-colonial Jaffna kingdom.[4] The district then came under Portuguese, Dutch and British control. In 1815 the British gained control of the entire island of Ceylon. They divided the island into three ethnic based administrative structures: Low Country Sinhalese, Kandyan Sinhalese and Tamil. The district was part of the Tamil administration. In 1833, in accordance with the recommendations of the Colebrooke-Cameron Commission, the ethnic based administrative structures were unified into a single administration divided into five geographic provinces.[5] Mannar District, together with Jaffna District and Vanni District, formed the new Northern Province.[6]

At the time that Ceylon gained independence, Mannar was one of the three districts located in the Northern Province. Manthai East division was transferred to newly created Mullaitivu District in September 1978.

Much of Mannar District was under the control of rebel Liberation Tigers of Tamil Eelam for many years during the civil war. The entire district was recaptured by the Sri Lankan military in 2008.

Mannar District is located in the north west of Sri Lanka in the Northern Province. It has an area of 1,996 square kilometres (771 sq mi).[1]

Murunkan (Tamil = Cracked Earth) is due to the black clay surface which is cracked while dry, is the place where the Giant's Tank is situated. It has montmorillonite clay and is the only place in Sri Lanka where this kind of clay can be obtained. This clay is used in making cement.

Aruvi Aru is the second longest river in Sri Lanka and runs through Mannar and Anuradhapura districts. Mannar has artesian springs and aquifers. These water supply comes from Sri Lanka's central areas. The Northern Province has a supply of fresh water from aquifers and it was used in successful cultivation. It only exists in the areas where red yellow latosol exists. These types of aquifers do not exist where reddish brown earth is found. The rest of the Vanni area is void of perennial supply of fresh water.

Mannar District is unique in its vegetation and wildlife contrasting with rest of Sri Lanka.

Mannar Island is also notably one of the few places in Sri Lanka where baobab trees thrive. The baobab tree, native to Africa, was bought by Arab sailors to feed camels which they stationed in the area. Although camels are not found in today, few baobab trees still thrive on the hot sandy Mannar region. The baobab (Adansonia digitata) belongs to the family Bombacaceae. It appear strange and barrel-like enormous trunk, which tapers into branches. When the leaves are shed, the tree gives the impression that it had been planted upside down. The name baobab comes from the Arabic plant name buhibab, while the scientific name is after the French Botanist M. Adanson (1727–1806). The tree is more known for its girth than height: trunks attain a diameter of 9 m (30 ft) in some cases, and are hollow in the centre. The bark is rough and greyish, and since it resembles the hide of an elephant, but Tamils refer to it as perukkaa which means "large fruit". Catholics in Mannar call baobab the Judas bag given the 30 seeds its fruit contains. Monkeys love the fruit and hence the tree is sometimes known as the monkey-bread tree. The dugong is a medium-sized marine mammal which is found in Mannar bay, Nachchikuda, Jaffna island and near Adams bridge.That has rich in sea grasses. IUCN conservation status is vulnerable because of over hunting for meat purpose and untargetly captured by fishing net.

A critically endangered tarantula species known as Poecilotheria hanumavilasumica was first found from Sri Lanka in Mannar region. This was the first time that the spider was recorded from outside of India[7][8][9]

Mannar District's population was 99,051 in 2012.[2] The population of the district is mostly Sri Lankan Tamil.

The population of the district, like the rest of the north and east of Sri Lanka, has been heavily affected by the civil war. The war killed an estimated 100,000 people.[13] Several hundred thousand Sri Lankan Tamils, possibly as much as one million, emigrated to the West during the war.[14] Many Sri Lankan Tamils also moved to the relative safety of the capital Colombo. Most of the Sri Lankan Moors and Sinhalese who lived in the district fled to other parts of Sri Lanka or were forcibly expelled by the rebel Liberation Tigers of Tamil Eelam, though most of them have returned to the district since the end of the civil war.

Mannar is a predominantly Catholic Christian area. There was equal amount of Muslim population and a few Sinhalase before 1990. Portuguese rule introduced Christianity and Hindu temples were simply changed into Catholic Churches and Forts. The whole of southern coastal India and western coast of Sri Lanka is a Catholic stronghold from the time of Portuguese colonisation. Buddhism, Hinduism and Islam may be present in small patches. 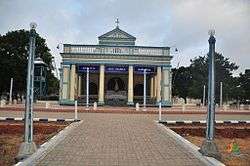 Shrine of Our Lady of Madhu

Mannar is part of the 'Catholic Belt' extending from Negombo to Jaffna. Portuguese first arrived in Colombo and established Catholicism in areas around Chilaw and further expanded their rule into Nagar Kovil, Kanyakumari and Tuticorin area. Thus the whole of Gulf of Mannar could be called a Catholic Belt.

The ancient Madu Church is one of the ancient churches in Asia and located near Murunkan. An ancient Kali Temple was demolished by Portuguese to construct the Catholic Church on the same location.

Pesalai Catholic Church is one of the largest church in Sri Lanka, which was rebuilt after year-2000. Alleged recent human rights violations by Sri Lanka Army and the LTTE attacks have brought it to the media attention internationally. (see 2006 Mannar massacres)

Vidathaltheevu St James Church also one of the big church in Mannar Diocese . It has a history of more than 400 years.Now also there are some ancient materials inside the church boundary which were protected and maintained by the very people who live in the suburb.Now the Church is being reconstructed by the village people.

Two great Sivan temples in Mannar were demolished by Portuguese. The new Thiruketheeswaram is built after the independence and it houses all the archeological finds of Hindu artefacts unearthed in the area. Several Hindu celebereties have visited Thiruketheeswaram including Appar, Sundarar and Sambanthar.

Mannar had a large Moor population for a long time before the forced expulsion of Muslims by the LTTE in 1990. Pakistan aided with arms and ammunition and was an erstwhile foe in the Sri Lankan Civil War.[18] Pakistani Air Force bombed Tamil civilians with cluster bombs against UN conventions. Even though Hindus, Christians and Muslims suffered under Sri Lankan military, Muslims did not support a separate Tamil Eelam.

In 1503, Vasco Da Gama expelled all the Muslims during his rule of Indian Portuguese Territory as part of the war against Turkey and its allies. At that time Hindu kings were ruling Jaffna Kingdom and Muslim refugees who fled from Portuguese rule were accepted in Mannar as a safe haven. Mukkuvars who were at war with Portuguese also came from Kerala and Cochin to escape the ethnic cleansing by Portuguese. Mannar also had a Muslim Member of Parliament. Human tragedy of 1990 involved in the expulsion resulted in Muslims walking 50 kilometers to the safety of Puttalam through Wilpattu National Park. 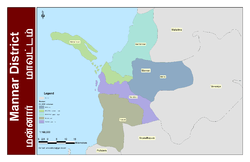 Mannar District has 5 local authorities of which one is an Urban Council and the remaining 4 are Divisional Councils (Pradesha Sabhai or Pradeshiya Sabha).[10]

Mannar has an ancient port which needs to be expanded into a large harbour like Rameshwaram Harbour. The present 'Sethusamudram Project' by the Indian Government will bring 90% of the shipping traffic very near to the Mannar Harbour.

The strategic advantages derive from obtaining a navigable sea route close to the coast, with a reduction in travel distance of more than 350 nautical miles (650 km) (for larger ships). The project is expected to provide a boost to the economic and industrial development of coastal Tamil Nadu. The project will be of particular significance to Jaffna, Kankesanthurai, Mannar, Point Pedro and Tuticorin harbour. Tuticurin has the potential to transform itself into a nodal port. The Tamil Nadu Government has announced its proposal to develop 13 minor ports, including Ennore, Cuddalore, Nagapattinam, Thondi, Valinokam, Kolachel and Kanyakumari.

Development of the canal and ports is also expected to provide increased maritime security for Tamil Nadu and Sri Lanka.

All the other harbours of Sri Lanka will get bypassed by the ships and Indian harbours will be servicing the shipping traffic. As such a hundred million dollar project needs to be started to build a modern harbour in Mannar to compete. The location of such a harbour can be on the northern side and southern side of Mannar as both the sides can cater for deep sea vessels.

The project has been criticized by some environmentalists.[19]

1. The chronicle of Sanctuary of Our lady of Madhu

2.Christianity in Srilanka under Portuguese

(Both are for Vidathaltheevu St James Church history)