Marshall is a city in Saline County, Missouri, United States. The population was 13,065 at the 2010 census. It is the county seat of Saline County.[6] The Marshall Micropolitan Statistical Area consists of Saline County. It is home to Missouri Valley College.

Sixty-five acres of land for the city of Marshall was donated by Jeremiah O’Dell, deeded on April 13, 1839. It was named for the United States Supreme Court Chief Justice, John Marshall, when chosen for the county seat. After the first two courthouses in Marshall were lost to fires, the Saline County Courthouse was constructed in January 1882. It was later placed on the National Register of Historic Places in 1977. It is an enduring landmark in the center of the Marshall Square and a legacy of nineteenth century architecture.[7]

The Nicholas-Beazley Airplane Company was an American aircraft manufacturer of the 1920s and 1930s with its headquarters in Marshall, Missouri. At its peak, the company produced as many as one aircraft per day. In 1937, production of aircraft ceased, after the great depression. Today, the Nicholas Beazley Aviation Museum is located at the Marshall Airport filled with aviation history. ConAgra Foods owns the property of the old Nicholas-Beazley Airplane Company factory building located right off the Marshall square; it was torn down in the summer of 2015 to expand the ConAgra plant.[8]

Marshall is rich in music history. Marshall is the home of Bob James, the acclaimed jazz musician, the Foothills Fest Music Festival, The Marshall Municipal Band and also notably the home to the Marshall Philharmonic Orchestra. The Orchestra performs every year for the public, free of charge, and has been featured in the LA Times in 2006 and on NBC's American Almanac in December 1985 among other local media outlets. The Philharmonic Orchestra has been performing for 52 years and counting. The Philharmonic usually performs on the Courthouse lawn every week during the summer months and fills the town square with music.[9]

Marshall is also home to Jim the Wonder Dog. Jim earned his reputation as a 'wonder dog' during the 1930s, puzzling psychologists from both Washington University, St. Louis and University of Missouri in Columbia. Dr. A. J. Durant, director of the School of Veterinary Medicine, tested Jim's abilities in a public demonstration. He concluded that Jim, "possessed an occult power that might never come again to a dog in many generations." Jim seemed to have the ability to guess the sex of an unborn baby and answer to orders in many different languages even though his owner, Sam Van Arsdale, only spoke English. Jim the Wonder Dog picked the winner of the Kentucky Derby seven years in a row. He also predicted the Yankee victory in the 1936 World Series. A joint session of the Missouri Legislature was called in order to witness the talents of Jim. He died March 18, 1937.[10]

During the Civil War, Marshall was garrisoned by Union Troops. Although Marshall was strategically unimportant, the town was the victim of two Confederate raids and site of the climactic Battle of Marshall.[7]

Missouri Valley College was founded in Marshall in 1889. The history of Missouri Valley College began during a conference at Sarcoxie, Missouri, on October 27, 1874 where the representatives of the several Presbyterian synods in the state of Missouri met to discuss founding the school. The school was affiliated with the Cumberland Presbyterian Church for a long period.

The college's original building, Baity Hall was built in 1889 and is listed on the National Register of Historic Places. The Victorian era building is notable for its beautiful wooden staircase, vaulted wooden ceilings and stained glass windows. Missouri Valley College is a private, four-year liberal arts college affiliated with the Presbyterian Church (USA). The 150-acre (60.7 ha) campus is in Marshall, Missouri. The college was founded in 1889 and supports 27 academic majors and an enrollment close to 1,800 students. Missouri Valley College is accredited by the Higher Learning Commission, a Commission of the North Central Association of Colleges and Schools.[11]

There were 4,741 households of which 33.6% had children under the age of 18 living with them, 42.4% were married couples living together, 14.1% had a female householder with no husband present, 5.6% had a male householder with no wife present, and 37.9% were non-families. 30.5% of all households were made up of individuals and 14.1% had someone living alone who was 65 years of age or older. The average household size was 2.49 and the average family size was 3.07.

There were 4,732 households out of which 30.7% had children under the age of 18 living with them, 45.8% were married couples living together, 12.9% had a female householder with no husband present, and 36.9% were non-families. 31.1% of all households were made up of individuals and 15.4% had someone living alone who was 65 years of age or older. The average household size was 2.42 and the average family size was 3.00. 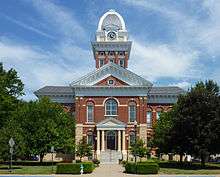 In October 2006, a resident of Marshall attempted to have the graphic novels Fun Home by Alison Bechdel and Blankets by Craig Thompson removed from the Marshall Public Library.[14] Supporters of the books' removal characterized them as "pornography" and expressed concern that they would be read by children.[15] Marshall Public Library Director Amy Crump defended the books as having been well-reviewed in "reputable, professional book review journals," and characterized the removal attempt as a step towards "the slippery slope of censorship".[14][15] On October 11, 2006, the Marshall Public Library Board of Trustees appointed a committee to create a materials selection policy, and removed Fun Home and Blankets from circulation until the new policy was approved.[16][17] On March 14, 2007, the board voted to return both Fun Home and Blankets to the library's shelves.[18]