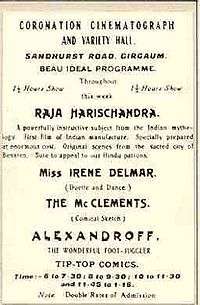 Media of India consist of several different types of Indian communications media: television, radio, cinema, newspapers, magazines, and Internet-based Web sites. Many of the media are controlled by large, for-profit corporations which reap revenue from advertising, subscriptions, and sale of copyrighted material. India also has a strong music and film industry. India has more than 70,000 newspapers and over 690 satellite channels (more than 80 are news channels) and is the biggest newspaper market in the world - over 100 million copies sold each day.[1]

The first Indian media were established in the late 18th century with print media started in 1780. Auguste and Louis Lumière moving pictures were screened in Bombay during July 1895; and radio broadcasting began in 1927.[2] Indian media—private media in particular—have been "free and independent" throughout most of their history.[3] The period of emergency (1975–1977), declared by Prime Minister Indira Gandhi, was the brief period when India's media were faced with potential government retribution.[3][4]

The French NGO Reporters Without Borders compiles and publishes an annual ranking of countries based upon the organisation's assessment of its Press Freedom Index. In 2011-12 India was ranked 131st out of 179 countries, which was a setback from the preceding year,[5] while Freedom house, a U.S. based NGO rates India, in its latest report, as "Partly Free".[6]

The traditional print media, but also the television media, are largely family-owned and often partake in self-censorship, primarily due to political ties by the owner and the establishment. However, the new media are generally more professional and corporate-owned, though these, too, have been acquired or affiliated with established figures. At the same time, the Indian media, viewed as "feisty," have also not reported on issues of the media itself.[7] 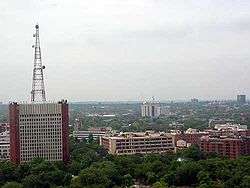 The headquarters of Doordarshan, for which experimental telecast started in September 1959. Regular daily transmission followed in 1965 as a part of All India Radio.
Main articles: Print media in India, List of newspapers in India, and List of newspapers in India by circulation
Further information: Press Trust of India, United News of India, and Category:Indian magazines

The first major newspaper in India—The Bengal Gazette—was started in 1780 under the British Raj by James Augustus Hicky.[3] Other newspapers such as The India Gazette, The Calcutta Gazette, The Madras Courier (1785), The Bombay Herald(1789) etc. soon followed.[3] These newspapers carried news of the areas under the British rule.[3] The Bombay Samachar, founded in 1822 and printed in Gujarati is the oldest newspaper in Asia still in print.[8] On May 30, 1826 Udant Martand (The Rising Sun), the first Hindi-language newspaper published in India, started from Calcutta (now Kolkata), published every Tuesday by Pt. Jugal Kishore Shukla.[9][10]

Currently India publishes about 1,000 Hindi Dailies that have a total circulation of about 80 million copies. English, the second language in terms of number of daily newspapers, has about 250 dailies with a circulation of about 40 million copies.[11] The prominent Hindi newspapers are Dainik Jagran, Dainik Bhaskar, Amar Ujala, Navbharat Times, Hindustan Dainik, Rajasthan Patrika, Nai Dunia etc.

The prominent English newspapers are The Times of India, founded in 1838 as The Bombay Times and Journal of Commerce by Bennett, Coleman and Co. Ltd, a colonial enterprise now owned by an Indian conglomerate; The Times Group. The Hindustan Times was founded in 1924 during the Indian Independence Movement ('Hindustan' being the historical name of India), it is published by HT Media Ltd. The Hindu founded in 1878 by a group known as Triplicane Six consisting of 4 law students and 2 teachers in Madras (now Chennai), it is now owned by The Hindu Group.

Newspaper sale in the country increased by 11.22% in 2007.[13] By 2007, 62 of the world's best selling newspaper dailies were published in China, Japan, and India.[13] India consumed 99 million newspaper copies as of 2007—making it the second largest market in the world for newspapers.[13] 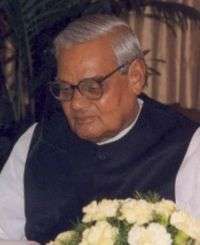 Radio broadcasting was initiated in 1927 but became a state responsibility only in 1930.[14] In 1937 it was given the name All India Radio and since 1957 it has been called Akashvani.[14] Limited duration of television programming began in 1959, and complete broadcasting followed in 1965.[14] The Ministry of Information and Broadcasting owned and maintained the audio-visual apparatus—including the television channel Doordarshan—in the country prior to the economic reforms of 1991.[15] The Government of India played a significant role in using the audio-visual media for increasing mass education in India's rural swathes.[3] Projected television screens provided engaging education in India's villages by the 1990s.[3] In 1997, an autonomous body was established in the name of Prasar Bharti to take care of the public service broadcasting under the Prasar Bharti Act. All India Radio and Doordarshan, which earlier were working as media units under the Ministry of I&B became constituents of the body.

On 16 November 2006, the Government of India released the community radio policy which allowed agricultural centres, educational institutions and civil society organisations to apply for community based FM broadcasting licence. Community Radio is allowed 100 Watt Effective Radiated Power (ERP) with a maximum tower height of 30 metres. The licence is valid for five years and one organisation can only get one licence, which is non-transferable and to be used for community development purposes.

The Indian Government acquired ES EVM computers from the Soviet Union, which were used in large companies and research laboratories.[19] Tata Consultancy Services – established in 1968 by the Tata Group – were the country's largest software producers during the 1960s.[19] The 'microchip revolution' of the 1980s had convinced both Indira Gandhi and her successor Rajiv Gandhi that electronics and telecommunications were vital to India's growth and development.[20] MTNL underwent technological improvements.[20] Between 1986–1987, the Indian government embarked upon the creation of three wide-area computer networking schemes: INDONET (intended to serve the IBM mainframes in India), NICNET (network for the National Informatics Centre), and the academic research oriented Education and Research Network (ERNET).[21]

The Indian economy underwent economic reforms in 1991, leading to a new era of globalisation and international economic integration.[22] Economic growth of over 6% annually was seen between 1993–2002.[22] The economic reforms were driven in part by significant the internet usage in India.[23] The new administration under Atal Bihari Vajpayee—which placed the development of Information Technology among its top five priorities— formed the Indian National Task Force on Information Technology and Software Development.[24] Internet gained a foothold in India by 1998.[19] India had a total of 100 million Internet users—comprising 8.5% of the country's population—by 2010.[25] By 2010, 13 million people in India also had access to broadband Internet— making it the 10th largest country in the world in terms of broadband Internet users.

India had a total of 34 million fixed lines in use by 2011.[26] In the fixed line arena, BSNL and MTNL are the incumbents in their respective areas of operation and continue to enjoy the dominant service provider status in the domain of fixed line services.[27] BSNL controls 79% of fixed line share in the country.[27]

The history of film in India begins with the screening of Auguste and Louis Lumière moving pictures in Bombay during the July 1895.[30] Raja Harishchandra—a full-length feature film—was initiated in 1912 and completed later.[30] Alam Ara (released 14 March 1931) —directed by Ardeshir Irani—was the first Indian movie with dialogues.[31]

Indian films were soon being followed throughout Southeast Asia and the Middle East—where modest dressing and subdued sexuality of these films was found to be acceptable to the sensibilities of the audience belonging to the various Islamic countries of the region.[32] As cinema as a medium gained popularity in the country as many as 1, 000 films in various languages of India were produced annually.[32] Hollywood also gained a foothold in India with special effects films such as Jurassic Park (1993) and Speed (1994) being specially appreciated by the local audiences.[32] Expatriates throughout the United Kingdom and in the United States continued to give rise to an international audiences to Indian movies, which, according to The Encyclopædia Britannica (2008) entry on Bollywood, "continued to be formulaic story lines, expertly choreographed fight scenes, spectacular song-and-dance routines, emotion-charged melodrama, and larger-than-life heroes".[33] Present day India produces the most films of any country in the world.[34] Major media investors in country are Yash Raj Films, Dharma Productions, Aamir Khan Productions, UTV Disney, Reliance Entertainment. Most of these productions are funded by investors since there is limited banking and credit facilities maturity in India for motion picture industry. Many international corporations, such as Disney (UTV), Viacom (Network18 Studio), and Fuse Global (AKP) have entered the nation's media industry on a large scale.

Some Indian media, controlled by businessmen, politicians, govt. bureaucrats, are facing criticism for biased, motivated reporting, and selective presentation. Recently, after the devastating Earth quake in Nepal on 25 April 2015, in spite of India helping, tweets from Nepal trended effectively saying, "Go home, Indian Media".[35] Journalists cover Businessmen, Filmstars & other Intentional topics more for TRP. Disturbed by corruption, Delhi chief Minister Arvind Kejriwal suggested on 3 May 2015 to have public trial of Indian Media.[36][37][38] On 8 May 2015, I & B Minister, Arun Jaitley echoed similar saying "Flood of channels but dearth of facts".[39][40] Off late a lot of mainstream media channels have been accused of printing and telecasting unverified and biased news which they retracted later. In few instances content from Twitter's parody accounts were cited as a source. Indian mainstream media has often been accused of showing sensationalized news items.[41][42][43]