United Nations Mission for the Referendum in Western Sahara

MINURSO's mission was to monitor the cease-fire and to organize and conduct a referendum in accordance with the Settlement Plan, which would enable the Sahrawi people of Western Sahara to choose between integration with Morocco and independence. This was intended to constitute a Sahrawi exercise of self-determination, and thus complete Western Sahara's still-unfinished process of decolonization (Western Sahara is the last major territory remaining on the UN's list of non-decolonized territories.)

To this end, MINURSO has been given the following mandates:

The independence referendum was originally scheduled for 1992, but conflicts over voter eligibility prevented it from being held. Both sides blamed each other for stalling the process. In 1997, the Houston Agreement was supposed to restart the process, but again failed. In 2003, the Baker Plan was launched to replace the Settlement Plan, but while accepted by the Polisario and unanimously endorsed by the United Nations Security Council, it was rejected by Morocco. Morocco insisted that all inhabitants of the territory should be eligible to vote in the referendum. Following the 1975 Green March, the Moroccan state has sponsored settlement schemes enticing thousands of Moroccans to move into the Moroccan-occupied part of Western Sahara (80% of the territory). By 2015, it was estimated that Moroccan settlers made up at least two thirds of the 500,000 inhabitants.[2]

Presently, there is no plan for holding the referendum, and the viability of the cease-fire is coming into question.

The MINURSO mandate has been extended 41 times since 1991.[3] In October 2006 the Security Council passed a resolution extending the mandate of MINURSO to April 2007.[4] A provision decrying human rights abuses by Morocco in Western Sahara had the backing of 14 members of the Security Council, but was deleted due to French objections.[5]

In April 2007 the resolution extending the mandate to October took "note of the Moroccan proposal presented on 11 April 2007 to the Secretary-General and welcoming serious and credible Moroccan efforts to move the process forward towards resolution" and also took "note of the Polisario Front proposal presented on 10 April 2007 to the Secretary-General".[6] The representative of South Africa took exception to the way that one proposal was held more worthy than the other as well as the lack of participation outside the Group of Friends in the drafting of the resolution.[7]

The October 2007 resolution extending the mandate to April 2008 contained the same preferential wording in its description of the two proposals.[8] The representative of South Africa commented on this again, and regretted the fact that the resolution "considered" rather than "welcomed" the report on the situation by the Secretary-General — "presumably because [it] dared to raise the issue of the human rights violations against the Saharawi people", and quoted the warning in the report[9] about there being no mandate to address the issue of human rights.[10]

The April 2008 resolution extended the mandate for a full year to April 2009.[11] Before the vote, the representative of Costa Rica expressed his "concern at the manner in which the draft resolution on which we are about to vote was negotiated" and a "difficulty in understanding the absolute refusal to include" references to human rights.[12] MINURSO's budget is roughly 60 million dollars per year.[13]

There are two sets of teams, those in the Moroccan-controlled portion west of the berm and those in the Sahrawi-controlled region and refugee camps to the east and in Algeria. The camps west of the berm are located in Mahbes, Smara, Umm Dreiga and Auserd. The eastern camps include Bir Lehlou, Tifariti, Mehaires, Mijek, and Agwanit. There is also a liaison office in Tindouf which serves as a communication channel with POLISARIO leadership.

As of 12 September 2012, MINURSO had a total of 230 uniformed personnel, including 26 troops, 6 police officers and 198 military observers, supported by 95 international civilian personnel, 145 local civilian staff and 23 UN Volunteers. Major troop contributors are Bangladesh, Russia and Egypt. Armed contingents patrol the no man's land that borders the Moroccan Wall, to safeguard the cease-fire. 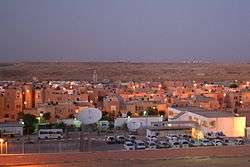 MINURSO headquarters in El Aaiun, Western Sahara, June 2, 2012. Several Moroccan flags are displayed at the entrance of the compound, in contrast with MINURSO bases in the POLISARIO Liberated Territories, where only the UN flag is displayed.

MINURSO is the only UN peacekeeping mission established since 1978 to be operating without the capacity to monitor human rights.[15] Although Resolution 1979 of the UN Security Council recommends the establishment of one, this has not yet happened.[16] In 1995, MINURSO's inability or unwillingness to act against perceived Moroccan manipulation of the process, and abuse of Sahrawi civilians, caused its former deputy chairman Frank Ruddy to deliver a strong attack on the organization;[17] he has since kept up his critique of what he argues is an economically costly and politically corrupt process.[18] Growing criticism has been voiced against the UN Security Council for not establishing a program of human rights (as MINURSO is the only UN mission in the world who has no mandate on them) monitoring for Western Sahara and the Sahrawi population,[19] despite serious reports of numerous abuses. .[20] This possibility has been denied by France with its veto power on the Security Council.[21] In April 2016, Uruguay and Venezuela expressed their dissatisfaction with this state of affairs by taking the rare step of voting against a Security Council Resolution reauthorizing MINURSO, United Nations Security Council Resolution 2285, from which Russia and two other powers abstained.

From 1995 but mostly in 2006-2007 period, MINURSO personnel vandalized archeological deposits [22] in the Free Zone (POLISARIO-controlled parts of Western Sahara). There are also accusations of looting of prehistorical paintings by individuals from the UN on some of those sites.[23]

In May 2010, the Polisario Front suspended contacts with the MINURSO, because of the failure on implementing the self-determination referendum, and accused the force of "...turning into a protector shield of a colonial fact, the occupation of the Western Sahara by Morocco".[24]

He also expressed his regret on the inability of MINURSO members to intervene, because their mandate does not monitor the protection of human rights, stressing the need to include them within the MINURSO mandates.