Moberly is a city in Randolph County, Missouri, United States. The population was 13,974 at the 2010 census. 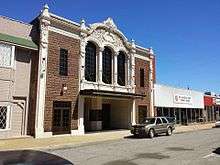 The facade of the historic 4th Street theater in downtown Moberly, MO. Built in 1913; one of the oldest still working movie theaters).

Moberly was founded in 1866, and named after Colonel William E. Moberly,[8] the first president of the Chariton and Randolph County railroads.

Like other towns in the Little Dixie region of Missouri in which it is located, Moberly has a history of racial violence. On February 18, 1893, John Hughes, an African American, was lynched by whites because he was deemed to have insulted a white person.[9] In November 1919, meanwhile, four African-American men alleged to have beaten and robbed a white farmer were arrested. A mob of white men built a fire in Forest Park -- today's Rothwell Park -- and removed the arrested men from the jail.[10] When they attempted to hang George Adams, one of the African-American men, from a tree, the limb broke and when Adams tried to escape the mob shot him dead.[11] The Kansas City Star called the event "a disgrace to the community and the state."[12]

The Missouri state Moberly Correctional Center was constructed two miles south of Moberly in 1963 as a minimum-security prison. As of 2014 it houses about 1800 minimum and medium security inmates.[13]

On Independence Day, 1995, a tornado ripped through downtown Moberly. There were no reported deaths, but there was a large amount of structural damage. Another tornado tore through the area (Renick) on Sunday, March 12, 2006. Four people were killed and thirteen were injured in the F3-level tornado. Dozens of homes were destroyed.

The World War II-era US Navy frigate USS Moberly (PF-63) was named for the town. The ship participated mostly in convoy escort, earning a battle star for her assistance in sinking a German submarine U-853.

Moberly is mentioned in the Tom Waits song "Black Market Baby," from the 1999 album Mule Variations.

The city of Moberly was born of a railroad auction on September 27, 1866. The county incorporated the town in 1868 with a board of trustees. The same year that the Wabash Railroad shops were finished in Moberly,[14][15] the city entered a charter into state record and incorporated.[16] At the time, there was no such thing as a council-manager government, but the 1950s saw the government form come into vogue in Missouri.[1] Now, the city of Moberly has a council-manager government. The council consists of five members elected for three-year terms and one city counselor who drafts ordinances and acts as legal counsel. Each year, the council elects one of its members as mayor and one as mayor pro tempore to serve for one year. To manage the city and oversee day-to-day operations, the council selects a city manager.[2] In 2015, the government had these officers:

A panorama from the northeast corner of the Kwix-Kres-Kirk office building in downtown Moberly, Missouri.

There were 4,960 households of which 32.5% had children under the age of 18 living with them, 40.1% were married couples living together, 15.9% had a female householder with no husband present, 4.8% had a male householder with no wife present, and 39.1% were non-families. 33.4% of all households were made up of individuals and 14.1% had someone living alone who was 65 years of age or older. The average household size was 2.35 and the average family size was 2.97.

There were 5,001 households out of which 29.3% had children under the age of 18 living with them, 44.2% were married couples living together, 13.6% had a female householder with no husband present, and 38.2% were non-families. 33.2% of all households were made up of individuals and 16.1% had someone living alone who was 65 years of age or older. The average household size was 2.30 and the average family size was 2.89.

The Railroad museum run by the Randolph county historical society, connected to a walking path that runs south, and overlooking the Municipal Auditorium and West Rollins Street. 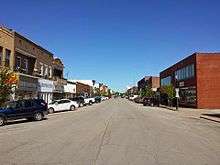 The city is served by U.S. Route 63 to the east on a bypass. The old route is designated as both Business 63 and Morley Street and goes through town. U.S. Route 24 goes through town as well. Route M (formerly Route 3) also skirts the edge of town. Other routes include Route DD (indirectly goes to Sugar Creek Lake), EE, A, and AA (past the prison). At one time there was a Business 24 that ran from Morley Street via West Coates Street to Johnson Street to Concannon Street turning North on Holman St to current U.S. 24. This route was de-numbered in the late 1960s. State Route 22 was also multiplexed with U.S. 63 to U.S. 24. When U.S. 63 was re-routed in the mid-1960s Highway 22 was truncated to its current end at U.S. 63 near Sturgeon, MO.

The Norfolk Southern Railway serves Moberly running west toward Kansas City, Missouri and east toward Hannibal, Missouri and points on. Norfolk Southern also runs south between Moberly and St. Louis, Missouri (via Centralia and Mexico, MO) and points on. Moberly was once the northern terminus of the Missouri-Kansas-Texas Railroad that ran between Moberly and Boonville, Missouri. Much of this route is still somewhat visible in satellite images.

Moberly is home to one of Norfolk Southern's many rail yards. Norfolk Southern used to have a line that ran north from Moberly to Albia, Iowa, but it was abandoned in the spring of 1992. The line was reopened from 1993-1995 to help in recovery efforts after the great Flood of 1993. By 1997, the line was dismantled between Moberly and Moulton, Iowa.

Moberly is served by a daily newspaper, the Moberly Monitor-Index. The Kwix Kres Kirk radio station operates from downtown.