Little Dixie is a 13- to 17-county region of mid-to-upper-mid Missouri found along the Missouri River, settled primarily by migrants from the hemp and tobacco districts of Kentucky, Virginia, and Tennessee. Because Southerners settled there first, the pre-Civil War culture was similar to that of the Upper South. The area was known as Boonslick country. When the Southerners resettled in Missouri, they brought their cultural, social, agricultural, architectural, political and economic practices, including slavery. On average Missouri’s slave population was only 10 percent, but in Little Dixie, county and township slave populations ranged from 20 to 50 percent by 1860, with the highest percentages for counties that had large plantations along the river.

While definitions of the counties included in Little Dixie vary, in 1860 the following seven counties were developed for plantations and their populations had proportions of slaves of 25 percent or more:

The only other county of the state where the enslaved population was as high in 1860 was New Madrid in the Bootheel, a region devoted to cotton plantations in the floodplains along the Mississippi River.[1] In 1847, the state legislature passed a law prohibiting the education of any African Americans, slave or free. 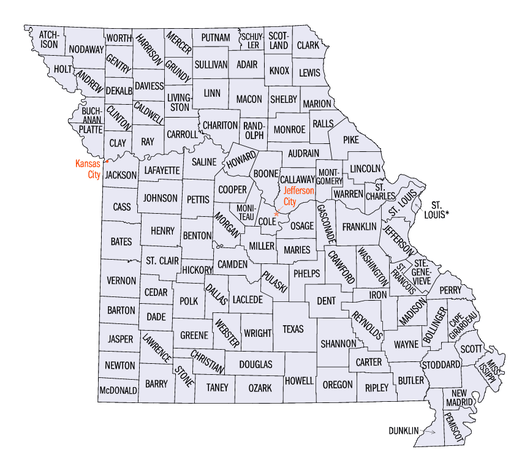 According to the Missouri Division - Sons of Confederate Veterans, the “heart” of Little Dixie was made up of the following counties:[2]

The major cash crop was hemp. In Lafayette County, locals declared hemp as king and dedicated all agricultural production to it, while foregoing necessary food production. In addition, planters in "Outer Little Dixie" counties, such as Platte, Howard, Chariton and Ralls,[2] grew millions of pounds of tobacco on large plantations with 20 or more slaves. Some farmers and planters grew cotton and sent their surplus down the Missouri River to St. Louis, and down the Mississippi to New Orleans. Cotton was exported to Britain, or shipped north to textile mills in New York and New England.

In Howard County, developed as plantations along the river, planters named their large estates, such as Greenwood, Redstone, Oakwood and Sylvan Villa. On these plantations, slave populations ranged between 15 and 70 people; they cultivated acreage of 500 acres (2 km²) to 2000 acres (8 km²), or more.

After the Civil War, slaves were emancipated and the Reconstruction-era legislature established free public education for all citizens, for the first time. While whites insisted that schools be segregated, the legislature provided that all townships with 20 or more black children of student age had to establish schools. By 1870, of the former slave states, Missouri had the "largest proportion of schools for negro children."[3] Black communities established churches and schools as part of their identities.

In Little Dixie in the early 20th century, of the counties with the largest black populations,

"Callaway County at one time had twenty-eight African American schools; Boone, eighteen; Howard, sixteen; Cooper, twenty-six; Chariton, fourteen; Lafayette, twenty; Saline, eighteen. Although the number of schools decreased as rural black communities dissolved with the onslaught of the Depression and the economic opportunity of the New Deal, in 1933 these same counties still had the highest number of black schools outside of St. Louis and the Bootheel."[4]

A higher frequency of mob violence occurred against African Americans in this region than in other parts of the state; the pattern appears to be strongly associated with the history of slavery and resulting race relations. In the late 19th-century white Democrats throughout the South sought to reimpose and maintain white supremacy. Between 1889 and 1919, a period that is considered the "nadir of racial relations" in the United States, Southern states disenfranchised blacks through new constitutions and amendments. Lynchings of black men were numerous in the South in this period.

In 1890 in the traditional seven counties of Little Dixie, the black population totaled 45,000, and it increased into the early 20th century.[5] In the "nadir" period, there were 13 lynchings of black men in total in Audrain, Boone, Callaway, Howard, Monroe, Pike, and Randolph counties. This number represented 16 percent of the total lynchings in the state during this period, whereas these seven counties contained under 6 percent of the state's total population. African Americans comprised just over 50 percent of the victims of lynching in other parts of Missouri, but in these seven counties, more than 90 percent of lynch victims were black, and they were overwhelmingly men.[6][7][8]

Mechanization of farms decreased the need for farm labor and African Americans began to leave the region for cities, especially in the Great Depression. The United States Supreme Court ruling of Brown v. Board of Education (1954) declared segregated public schools to be unconstitutional but integration of schools was slow in some areas. After integration, some former black schools were closed and adapted for new uses; others were in too poor condition to be used.

In many parts of Little Dixie, the antebellum plantation homes still stand today. Many people participate in heritage tourism and historic projects to preserve these structures and other aspects of this era.

Other aspects of the region's complex history, including after the Civil War, are also being studied and preserved. Beginning in 1998, the State Historic Preservation Office (of the Department of Natural Resources), conducted a survey to study the remaining historic African-American schools in the fifteen counties of Little Dixie; this survey was extended throughout the state and lasted until 2002.[9] The study documented the historic structures, identifying those that were unique architecturally, but it also captured the stories of people associated with them. The team conducted many oral interviews with former students, teachers, administrators and members of the communities to learn about their societies during the Jim Crow era.[10] Because many of the former schools were just one room, they have been adapted for a wide variety of uses and many have survived. In addition, schools were often started in black churches or chapels, many of which still stand.[11] As a result of the study, the state recommended numerous African-American schools for nomination to the National Register of Historic Places.

Continuing demographic changes throughout the 20th century have resulted in a decrease in the number and proportion of African Americans in most of the seven counties noted in the second paragraph of this section; only Boone County in 2010 had an increase in African-American population since 2000. It had 9.29 percent blacks in the population.[12] Each of the other six counties had 6 percent or less proportion of African Americans to total population, and in every case, the number and proportion had declined since 2000.[13]

"Little Dixie" later was used as the name of a Missouri athletic conference. The Little Dixie Conference, or LDC, was made up of the following area high schools:

The Little Dixie Conference disbanded prior to the 2006 fall sports season. All schools (except Community, Sturgeon and Madison) formed the new Mid-Missouri Conference, along with North Callaway and Tipton high schools.