The history of music in Estonia dates back as far as the 12th century. The older folksongs, referred runic songs, are in the poetic metre regivärss the tradition shared by all Baltic Finns. These were gradually replaced by rhythmic folksongs in the 18th century.

The earliest mentioning of Estonian singing and dancing dates back to Saxo Grammaticus' Gesta Danorum (c. 1179).[1] Saxo speaks of Estonian warriors who sang at night while waiting for an epic battle.

The Estonian folk music tradition is broadly divided into 2 periods. The older folksongs are also referred to as runic songs, songs in the poetic metre regivärss the tradition shared by all Baltic-Finnic peoples. Runic singing was widespread among Estonians until the 18th century, when it started to be replaced by rhythmic folksongs. Professional Estonian musicians emerged in the late 19th century at the time of Estonian national awakening. Nowadays the most known Estonian composers are Arvo Pärt and Veljo Tormis. 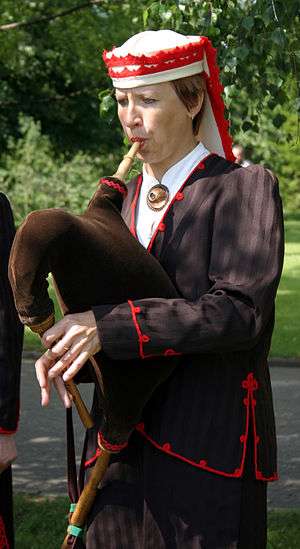 Estonian runo-song (Estonian: regilaul) has been extensively recorded and studied, especially those sung by women. They can come in many forms, including work songs, ballads and epic legends. Much of the early scholarly study of runo-song was done in the 1860s by Friedrich Reinhold Kreutzwald, who used them to compose the Estonian national epic, Kalevipoeg. By the 20th century, though, runo-song had largely disappeared from Estonia, with vibrant traditions existing only in Setumaa and Kihnu.

Traditional wind instruments derived from those used by shepherds were once widespread, but are now more rarely played. Other instruments, including the fiddle, zither, concertina and accordion are used to play polka or other dance music. The kannel is a native instrument that is now more popular among Estonian-Americans than in its homeland. Nevertheless, Estonian kannel musicians include Igor Tõnurist and Tuule Kann.

A notable example of an Estonian folk song is the Herring song, called "The herring lived on dry land", or according to some sources just "Herring". According to the song, in the ancient time the herring used to have legs and live on dry land. It used to destroy Vermin, like Rats and it was kept like a cat. One time a two masted Sailing ship was transporting a large load of Salt. Back then salt was expensive. Some unit of it called "saam" cost 100 of something in gold. There was a herring aboard the ship. The specific herring liked to eat salt, so it started to tunnel its way around the salt sacks. Eventually it accidentally chewed its way through the ships wooden hull, causing it to sink. This angered Neptune (the god of sea), who said to the herring: "Hey herring, because you chewed a hole into the ship and sunk the new ship, you will now have to live in seawater as punishment." The salt from the ship was released into the sea, resulting in the seas now having a salt composition.[2][3][4][5][6]

In the 1960s, the Soviet government began encouraging folk art from its constituent republics. Local ethnographic bands were formed after Leiko, a choir from Värska, came together in 1964, while a less regionally distinct form of Estonian folk music was soon promoted, Estonian Ring Dance beginning with the formation of Leigarid in 1969. The 1950s and 60s also saw the publication of Herbert Tampere's Eesti rahvalaule viisidega (Estonian folk songs with melodies), a collection of folk songs. The first LP of traditional music, Eesti rahvalaule ja pillilugusid (Estonian folk songs and instrumental pieces) was released in 1967. In the 1980s, a series of festivals took place that helped stimulate increasing agitation for freedom of expression; these included the 1985 conference of CIOFF, the 1986 Viru säru and 1989's Baltica.

In the 1950s, Estonian baritone Georg Ots rose to worldwide prominence as an opera singer.

There are several yearly music festivals of Estonia.

The indie folk rock band Ewert and The Two Dragons are among the best known Estonian bands, having had success in Europe and signing with Warner Bros. Records and winning the European Border Breakers Award in 2012. The girl band Vanilla Ninja were also one of the best-known Estonian bands before their hiatus. In addition, artists such as Kerli, Vaiko Eplik & Eliit and Iiris have gained popularity outside Estonia.

Metsatöll is a folk-metal band combining runo-song and traditional folk instruments with metal. Another Estonian folk metal group is Raud-ants, who performed at the annual minority language music festival Liet-Lavlut with a song in Votic.

Contemporary artists include Jüri Pootsmann, Ott Lepland and Kristel Aaslaid. Today, many music festivals are held, such as Eesti Laul.