Albanian music (Albanian: Muzikë popullore or Muzikë shqiptare) displays a variety of influences. Albanian folk music traditions differ by region, with major stylistic differences between the traditional music of the Ghegs in the north and Tosks in the south. Since the 1920s, some composers such as Fan S. Noli have also produced works of Albanian classical music. One of the most important venues exhibiting traditional Albanian music is the Gjirokastër National Folklore Festival held every five years in Gjirokastër, southern Albania.

Photo of the Band of Freedom, a musical group of the Albanian National Awakening that was active in the city of Korçë, 1909.

Albania's political, military and cultural domination by outside elements have contributed to the country's modern music scene. Albanian music is a fusion of the music of Southeastern Europe, especially that of the Ottoman Empire, which ruled Albania for more than 500 years. However, the Albanian people kept maintained vast cultural identity away from their overlords, with many living in rural and remote mountains.

Albanian folk music falls into three stylistic groups, with other important music areas around Shkodër and Tirana; the major groupings are the Ghegs of the north and southern Labs and Tosks. The northern and southern traditions are contrasted by the "rugged and heroic" tone of the north and the "relaxed, gentle and exceptionally beautiful" form of the south. These disparate styles are unified by "the intensity that both performers and listeners give to their music as a medium for patriotic expression and as a vehicle carrying the narrative of oral history",[1] as well as certain characteristics like the use of rhythms such as 3/8, 5/8 and 10/8.[2] The first compilation of Albanian folk music was made by Pjetër Dungu in 1940.

Albanian folk songs can be divided into major groups, the heroic epics of the north, and the sweetly melodic lullabies, love songs, wedding music, work songs and other kinds of song. The music of various festivals and holidays is also an important part of Albanian folk song, especially those that celebrate St. Lazarus Day (the llazore), which inaugurates the springtime. Lullabies and laments are very important kinds of Albanian folk song, and are generally performed by solo women.[3]

The Ghegs from north of the Shkumbini River are known for a distinctive variety of sung epic poetry. Many of these are about Skanderbeg, a legendary 15th century warrior who led the struggle against the Turks, and the "constant Albanian themes of honour, hospitality, treachery and revenge". These traditions are a form of oral history for the Ghegs, and also "preserve and inculcate moral codes and social values", necessary in a society that, until the early 20th century, relied on blood feuds as its "primary means of law enforcement".[4]

The most traditional variety of epic poetry is the Albanian Songs of the Frontier Warriors. These epic poems are sung, accompanied by a lahuta, a one-stringed fiddle. It is rarely performed in modern Albania, but is found in the northern highlands.[1]

Somewhat further south, around Dibër and Kërçovë in Macedonia, the lahuta is not used, replaced by the çifteli, a two-stringed instrument in which one string is used for the drone and one for the melody. Though men are the traditional performers (exception made for the sworn virgins), women have increasingly been taking part in epic balladry.[1]

Along with the def, çifteli and sharki are used in a style of dance and pastoral songs. Homemade wind instruments are traditionally used by shepherds in northern Albania; these include the zumarë, an unusual kind of clarinet. This shepherds' music is "melancholic and contemplative" in tone.[1] The songs called maje-krahi are another important part of North Albanian folk song; these were originally used by mountaineers to communicate over wide distances, but are now seen as songs. Maje-krahi songs require the full range of the voice and are full of "melismatic nuances and falsetto cries".[3]

Southern Albanian music is soft and gentle, and polyphonic in nature with similarities with Greek music on polyphonic song of Epirus. Vlorë in the southwest has perhaps the most unusual vocal traditions in the area, with four distinct parts (taker, thrower, turner and drone) that combine to create a complex and emotionally cathartic melody. Author Kim Burton has described the melodies as "decorated with falsetto and vibrato, sometimes interrupted by wild and mournful cries". This polyphonic vocal music is full of power that "stems from the tension between the immense emotional weight it carries, rooted in centuries of pride, poverty and oppression, and the strictly formal, almost ritualistic nature of its structure".[1]

South Albania is also known for funeral laments with a chorus and one to two soloists with overlapping, mournful voices. There is a prominent folk love song tradition in the south, in which performers use free rhythm and consonant harmonies, elaborated with ornamentation and melisma.[3]

The Tosk people are known for ensembles consisting of violins, clarinets, lahutë (a kind of lute) and def. Eli Fara, a popular émigré performer, is from Korçë, but the city of Përmet is the center for southern musical innovation, producing artists like Remzi Lela and Laver Bariu. Lela is of special note, having founded a musical dynasty that continues with his descendants playing a part in most of the major music institutions in Tirana.[1]

Southern instrumental music includes the sedate kaba, an ensemble-driven by a clarinet or violin alongside accordions and llautës. The kaba is an improvised and melancholic style with melodies that Kim Burton describes as "both fresh and ancient", "ornamented with swoops, glides and growls of an almost vocal quality", exemplifying the "combination of passion with restraint that is the hallmark of Albanian culture."[1]

The ethnic Greek inhabitants of the country's southern parts, have a music very similar to the music of Epirus in Greece.

The city of Shkodër has long been one of the most important cultural centers of Albania, and its early 20th century music is considered as one of the most sophisticated in the country.[1] Traditional musicians from Shkodër include Bujar Qamili, Luçie Miloti, Xhevdet Hafizi and Bik Ndoja.

Albania's capital, Tirana, is the home of popular music dominated by Romani influences and has been popularized at home and in emigrant communities internationally by Merita Halili, Parashqevi Simaku, and Myslim Leli.[1]

The Albanian Urban Lyric Song is a tradition that started in Albania in the 18th century but culminated in the 1930s.[5] These songs are a major part of Albania's music heritage, but have been little-studied by ethnomusicologists, who prefer to focus on the rural folk music that they see as being more authentically Albanian. Out of this melting pot of local and imported styles came a kind of lyrical art song based in the cities of Shkodra, Elbasan, Berat and Korça. Though similar traditions existed in other places, they were little recorded and remain largely unknown. 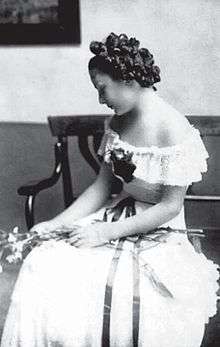 By the end of the 19th century, Albanian nationalism was inspiring many to attempt to remove the elements of Turkish music from Albanian culture, a desire that was intensified following independence in 1912; bands that formed during this era like the Korçë-based Lira Chorus[6] played a variety of European styles, including marches and waltzes. Urban song in the early 20th century could be divided into two styles: the historic or nationalistic style, and the lyrical style.[3] The lyrical style included a wide array of lullabies and other forms, as well as love songs.

In the early decade of the 1930s, urban art song had been incorporated into classical music, while the singer Marie Kraja made a popular career out of art songs; she was one of Albania's first popular singers. The first recordings, however, of urban art song came as early as 1937, with the orchestral sounds of Tefta Tashko-Koço.[3]

Modern Albanian popular music uses instruments like the çifteli and sharki, which have been used in large bands since the Second World War to great popular acclaim; the same songs, accompanied by clarinet and accordion, are performed at small weddings and celebrations.[1] 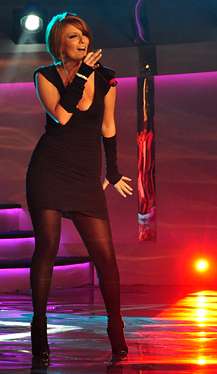 Tallava is a music genre originating in Kosovo, also popular in Albania and the Republic of Macedonia, in the Albanian-speaking communities.[7][8][9] Having originated in the Roma community in Kosovo in the 1990s, it is oriental-sounding, and perceived of as low-status.[10] Nevertheless, it is becoming increasingly popular in Albania and Macedonia.[11] It is identified as part of the wider Pop-folk genre of the Southeastern Europe, which includes Chalga from Bulgaria, Skiladiko from Greece, Manele from Romania and Turbo-folk from Serbia.[12]

Albanian music in Macedonia and Kosovo

Main articles: Music of the Republic of Macedonia and Music of Kosovo

Kosovo has been home to many important Albanian musicians and the same can be said for Macedonia. Prior to the Kosovo War, there was a thriving music industry in Kosovo, which reached new heights in recent years. The Kosovar music industry was home to many famous musicians, including the famous Nexhmije Pagarusha, Ismet Peja and the romantic, more elaborate Qamili i Vogël of Gjakova.[1] The Macedonian band Vëllezërit Aliu became well- known for the traditional vocal duets accompanied by drum box, electric bass, synthesizer and clarinet or saxophone.[1] Gjurmët is one of the most famous and influential 1980s rock bands from Pristina.[13]

One of founders of the Albanian classical music was Lec Kurti, compositor and diplomatic who composed the first Albanian opera "Arbereshja" in the 1915. One pivotal composer in modern Albanian classical music was Martin Gjoka, who composed several vocal and instrumental music which uses elements of urban art song and the folk melodies of the northern highlands; Gjoka's work in the early 1920s marks the beginning of professional Albanian classical music.[14] Later, the Albanian-American émigrés Fan S. Noli and Mikel Koliqi achieved some renown, with Noli using urban folk songs in his Byzantine Overture and is also known for a symphonic poem called Scanderberg.[3] Koliqi spent much of his life in prison for his religious beliefs, but managed to compose melodramas like The Siege of Shkodër, The Red Scarf and Rozafa, which helped launch the field of Albanian opera. Other famous art composers include Thoma Nassi, Kristo Kono and Frano Ndoja. Prenk Jakova became well known for operas like Scanderbeg and Mrika, which were influenced by traditional Italian opera, the belcanto style and Albanian folk song. Undoubtedly the most famous Albanian composer, however, was Çesk Zadeja, known as the Father of Albanian classical music;[14] he composed in many styles, from symphonies to ballets, beginning in 1956, and also helped found the Music Conservatory of Tirana, the Theatre of Opera and Ballet, and the Assembly of Songs and Dances.

Most notable Albanian opera singer, known for her international success, is Inva Mula. She appeared in The Fifth Element movie, where she borrowed her voice to Diva Plavalaguna character. She is the daughter of another famous Albanian composer Avni Mula. 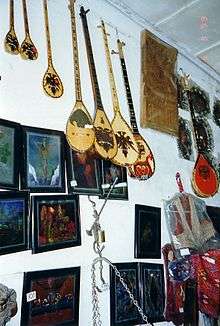 In Albania, the most prominent rock bands and individuals only appeared after 1990. Before that period rock music was prohibited. Although youth groups found ways to listen it through clandestine channels.[15]

Furthermore, electronic music is a mainstream music genre in Albania. Albanian artists and DJs such as DJ Aldo are collaborating mainly with Italian and Romanian artists, while showcasing themselves in renown clubs in Tirana, and at annual music festivals along the Albanian Riviera such as Turtle Fest and Soundwave Albania.