Traditional Latvian folklore, especially the dance of the folk songs, date back well over a thousand years. More than 1.2 million texts and 30,000 melodies of folk songs have been identified.[1]

Dainas are very short, usually only one or two stanzas, unrhymed and in a four-footed trochaic metre. Lyrically, dainas concern themselves with native mythology but, in contrast to most similar forms, do not have any legendary heroes. Stories often revolve around pre-Christian deities like the sun goddess Saule, the moon god Meness and, most notably, the life of people, especially its three most important events - birth, wedding and death (including burial). The first collection of dainas was published between 1894 and 1915 as Latvju Dainas by Krišjānis Barons.

Latvju tautas mūzikas materiāli, translated in English as the Materials of Latvian Folk Music is the anthology and commentary of Latvian folk. It analysed 5999 items of Latvian ethnography published in 6 editions from 1894 to 1926 by the Latvian musicologist and composer Andrejs Jurjāns (1856–1922).[2][3]

Accompaniment to the village songs is played on various traditional instruments, the most important of which is the kokle, a type of zither related to the Finnish kantele. In the 1970s, artists like Jānis Porikis and Valdis Muktupāvels led a revival in kokle music, which had only survived in the Courland/Kurzeme and Lettgallia/Latgale regions. The Latvian-exile community abroad, especially in the United States, has also kept kokle traditions alive. In the last hundred years a new kind of kokle was developed, with many more strings, halftones levelers and other improvements that expand the capacities of the instrument to play not only modal music but, in other point of view, displeased more traditional musicians. This kind of instrument is called "concert kokle". However, there is currently only one concert kokle maker left, though he is to begin training apprentices with the help of EU grants. 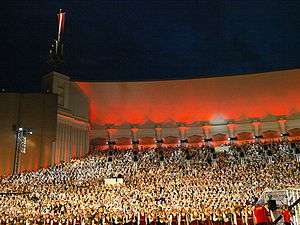 Choirs performing during the 24th Latvian Song and Dance Festival in 2008.

Choir traditions are very strong in Latvia. Alongside many professional choirs, there are tens of thousands of Latvians who are part of different amateur choirs. Once every five years the Latvian National Song and Dance Festival takes place with around 20,000 singers taking part in it.

During the Soviet era, rock music became extremely popular, because it, as well as folk songs, offered a chance to rebel against the local authorities. Imants Kalniņš was the most important composer of the time, and his songs were extremely popular. He also wrote music for the movie originally called Četri balti krekli ('Four White Shirts'), later given the title Elpojiet Dziļi! ('Breathe Deep!'), which spoke about the need of freedom and was therefore banned. One of the most important social gatherings of the time was the annual Imantdiena ('The Day of Imants (Kalnins)'), forbidden on grounds of interfering with hay-gathering. The tradition continued informally at the composer's house.

The songs of Imants Kalniņš were best known as performed by the Menuets group which only played songs by this composer. Most of the members of the group moved on to form another group, Pērkons ('Thunder') later. Pērkons was a symbol of rebellion. They played fascinating rock and roll bordering on hard rock music, composed by band's leader Juris Kulakovs, using poems mostly written by Māris Melgalvs. Many of those were strongly disapproved by the Soviet authorities, as they implied the ridiculousness of the system. The most famous concert by Pērkons resulted in the destruction of a train compartment by the young people who had attended the concert. This, as well as other events, is portrayed in the movie Vai viegli būt jaunam? ('Is It Easy to Be Young?') by Juris Podnieks. Acts such as Pērkons certainly played an important role in the lives of the youth of the time and were a serious challenge to the Soviet system.