Kosovar music displays a variety of influences. Music has always been part of the Albanian and Serbian cultures in Kosovo.[lower-alpha 1] Along with modern music, folk music is the most popular. There are many folk singers and ensembles. Classical music is also known in Kosovo. The modern music in Kosovo has its origin in the Western countries. The main modern genres include: pop, hip hop,[1] rock and jazz.

Tallava is a music genre originating in Kosovo, also popular in Albania and the Republic of Macedonia, in the Albanian-speaking communities.[3][4][5] Having originated in the Roma community in Kosovo in the 1990s, it is oriental-sounding, and perceived of as low-status.[6] Nevertheless, it is becoming increasingly popular in Albania and Macedonia.[7] It is identified as part of the wider Pop-folk genre of the Southeastern Europe, which includes Chalga from Bulgaria, Skiladiko from Greece, Manele from Romania and Turbo-folk from Serbia.[8]

Yugoslavian influence among Albanians in Kosovo was also present in rock music.[9] The first known Albanian rock band was called Blue Star appeared in 1964 in Pristina, later they renamed it to Modestët.[10] In the beginning of the 70's, rock music stage present in Kosovska Mitrovica, Kosovo (then Yugoslavia) was made of both Serbian and Albanian bands. Some of these bands, like MAK[11] had both Albanian and Serbian musicians. Another bi-ethnic band was FAN also based in Mitrovica.

Pristina was the most important city for Albanian rock music during the 80's. In the mainstream circles Gjurmët (founded 1981) were among favorites. Their combination of rock with "muzikë qytetare" laid the foundation of Albanian rock. Other known bands that formed during this period were Ilirët, 403, Telex, Seleksioni 039, Minatori and Menkis. On the other hand, the underground music was more leaning towards punk. Most notable underground rock/punk band of Pristina in the 1980s was Lindja with its lead musician Luan Osmani (lead guitar). The beginning of the 90's introduced other rock bands and individuals that played mainly in Kosovo like Troja, Dardan Shkreli, Blla blla blla and Elita 5 (from Macedonia).

During parallel governance (1989–1999) and after the 1999 war in Kosovo several new bands emerged, among which most famous are Diadema, KEK ("Kreativ e jo Komercial" = Crative and not commercial), 7me7, The Hithat, Cute Babulja, Por-no, Gre3n, Retrovizorja.

After 2004 many alternative rock band appeared forming a new wave. Many bands formed, dissolved than re-formed. Bands like Votra, Gillespie, The Bloody Foreigners, and Gre3n (ceased existing in 2008). Also the Glasses, the Dizzies (with some band members of Gillespie) The Freelancers most of them debuting in 2009.

In the past, epic poetry in Kosovo and northern Albania was sung on a lahuta (a one-string fiddle) and then a more tuneful çiftelia was used which has two strings-one for the melody and one for drone. Kosovar music was influenced by Turkish music since they occupied Kosovo for almost 500 years but the kosovar folklore has saved his originality and exemplary.[12] Archaeological researches tells about how old is this tradition and how was it developed in parallel way with other traditional music in Balkan. There were found lots of roots since 5th Century B.K like paintings in the stones of singers with instruments(Is famous the portrait of "Pani" who was holding an instrument similar to flute)[13] 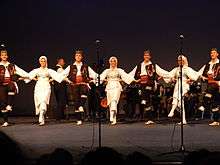 Serbian music from Kosovo presents a mixture of traditional music, which is part of the wider Balkan tradition, with its own distinctive sound, and various Western and Turkish influences.[14] Serb songs from Kosovo were an inspiration for 12th song wreath (sr. Руковет) by composer Stevan Mokranjac. Most of Serbian music from Kosovo was dominated by church music, with its own share of sung epic poetry.[14] Serbian national instrument Gusle is also used in Kosovo.[15] Mara Đorđević was a famous singer of Serbian folk songs from Kosmet. Nowadays, Jordan Nikolić sings songs from this territory.

The contemporary pop star Rita Ora is an Albanian from Pristina and has achieved an international recognition for her music.[16] One widely recognised musician from Prizren is guitarist Petrit Çeku, winner of several international prizes.[17]

RTK is the television channel applying for EBU membership . The channel applied to enter Kosovo for the Eurovision Song Contest 2009.[18][19][20] Kosovo would have made its Eurovision Song Contest debut in 2011 if it joined the EBU. Kosovo is eligible to join as stated by the EBU.[21] However, Russia and some other participating countries do not recognise the unilateral declaration of independence by Kosovo's Parliament, therefore they reject Kosovo's EBU membership. According to the Kosovar newspaper Koha Ditore, a future entry would be selected via a national final called Akordet e Kosovës, a former pop show that had been taken off the air some years ago.

Viktorija a singer from Vučitrn, Kosovo represented Yugoslavia as part of Aska in 1982. As before declaration of independence, some of Kosovo Albanians artists compete in the Festivali i Këngës, national selcetion for Albania and represent Albania. The Kosovar singer, Rona Nishliu, sang "Suus" in Eurovision and ended 5th in the grand final in 2012. Serbia still continues to claim Kosovo as its own Autonomous Province of Kosovo and Metohija. Some singers from Kosovo, especially Kosovo Serbs, participate in Serbian national selection organized by RTS. Nevena Božović represented Serbia in the Junior Eurovision Song Contest 2007 and, as member of Moje 3, in the Eurovision Song Contest 2013.