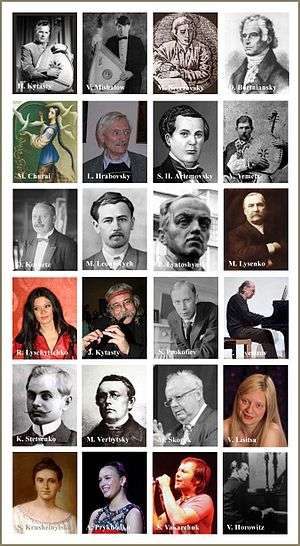 Some influential musicians in Ukraine and abroad related to Ukrainian music.

Ukrainian music is a music which its content covers diverse and multiple component elements of the music that is found in Western and Eastern musical civilization. It also has a very strong indigenous Slavic and Christian uniqueness whose elements were used among many neighboring nations.[1][2]

Ukraine is also the rarely acknowledged musical heartland of the former Russian Empire, home to its first professional music academy, which opened in the mid-18th century and produced numerous early musicians and composers.[3]

Modern Ukraine is situated north of the Black Sea, previously part of the Soviet Union. Several of its ethnic groups living within Ukraine have their own unique musical traditions and some have developed specific musical traditions in association with the land in which they live.

Ukraine found itself at the crossroads of Asia and Europe and this is reflected within the music in a perplexing mix of exotic melismatic singing with chordal harmony which does not always easily fit the rules of traditional Western European harmony. The most striking general characteristic of authentic ethnic Ukrainian folk music is the wide use of minor modes or keys which incorporate augmented 2nd intervals. This is an indication that the major-minor system developed in Western European music did not become as entrenched or as sophisticated in Ukraine.

Rhythmically the music rarely uses complex time-signatures, but compound meters are encountered, and the music can be extremely complex harmonically.

Harmonically three and even four part harmony had developed and was recorded in the central steppe regions of Ukraine, but was not in popular use in the mountain regions by the late 19th century.

Ukrainian folk song singing style can be divided into a number of broad aesthetic categories.

2. Solo singing with instrumental accompaniment by professional itinerant singers known as kobzari or lirnyky. The highest form of development of this style of singing can be seen in the lyric historical folk epics known as dumy sung to the accompaniment of the bandura, kobza or lira (lirnyk). Dumy were sung primarily in the dorian mode

3. The third is an archaic type of modal "a cappella" vocal style in which a phrase sung by a soloist is answered by a choral phrase in 2- or 3- voice vertical polyphony/heterophony/harmony. The vocal inflection here is quite mediaeval in character, and some peculiarities of distinctly Ukrainian flavor are noticeable, such as parallel fifths and octaves, and several types of plagal cadences. This type of song, once dominant, after 1650 has ceded its hegemony to the newer tonal types, but can still be found in isolated villages. This style is evident in the "Kolyadka" and "Shchedryk".

4. *The other vocal styles are marked by the influences exerted by European music, by paraliturgical music of Danylo Tuptalo and his circle in the early 18th century, and later by classical music and urban culture.

One of the most active proponents of these styles of Ukrainian vocal music is Nina Matviyenko. In recent time groups have been established dedicated to preservation to Ukrainian traditional polyphony, notably "Bozhychi", "Hurtopravci", "Volodar", "Korali" and "Drevo".

The traditional dances of Ukraine include: the Kozak, Kozachok, Tropak, Hopak, Hrechanyky, Kolomyjka and Hutsulka, Metelytsia, Shumka, Arkan, Kateryna (Kadryl) and Chabarashka. Dances originating outside the Ukrainian ethnic region but which are also popular include: the Polka, Mazurka, Krakowiak, Csárdás, Waltz, Kamarinskaya and Barynya. Ukrainian instrumental and dance music has also influenced Jewish (Hava Nagila-Let's rejoyce) and Gypsy music and much of it was included in the repertoire of itinerant klezmorim.

Early in the 20th century, Pavlo Humeniuk of Philadelphia became famous in North America for his fiddle music. 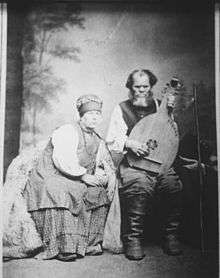 Ostap Veresai, the most famous Ukrainian kobzar of the 19th century, and his wife Kulyna

Although most instrumental dance music in Ukraine can be sung to, there exist in Ukraine a group of professional folk musicians who sing to their own accompaniment. These itinerant musicians were generically called kobzari (kobzar – singular), and accompanied their singing with the kobza, bandura, or lira. Although their origins stretch back to antiquity, their repertoire and customs directly date back to the 17th century in which they depict the period of the conflicts between the Kozaks and various foreign oppressors. There were many cases of those folk singers being blind which became a stereotype in the cultural memory.

The kobzari organized themselves into regional professional guild-like structures, known as a "Kobzar Guild".

During Soviet era almost all of the traditional kobzari were killed, the bulk perishing during Stalin's "purges" during the 1930s. Even the instrument, kobza and bandura, were prohibited and confiscated. A practice of the Ukrainian ethnocide that continued after the fall of the Russian Empire.

Under the inspiration of noted traditional bandurist Heorhiy Tkachenko a Kobzar Guild was re-established in 1991 in Kiev by Mykola Budnyk in order to revive and foster the ancient kobzar traditions. The Guild unites many singer-musicians in Ukraine and the Ukrainian diaspora. Many of its members are not formally Conservatory trained.

The most notorious songs and music

Although not precisely definable as music, there are signals played on the trembita (a type of alpenhorn, to signify death, birth, a marriage or another significant event) by the Hutsuls in the Carpathian mountains.

With the establishment of the Soviet regime in Ukraine a policy based on state atheism was instituted which gradually grew to an intolerance to organized religion. Religious music was not supported by the regime and in time was purged from performance. Many aspects of classical music were also branded as being bourgeois and decadent.

A movement was started in the 20's for "Proletarian songs" – music of the working people. In time it was noticed that this music only catered for the working classes in the cities and did not take into account the large percentage of Ukrainian peasants living in village setting. As a consequence, songs of the village were also defined as being also from the working class. Resulting from this reclassification the Soviet government began to give significant support to this form of music. Hence, various "fakeloric" ensembles came into existence. After World War II huge resources continued to be given to support this style of music in order to displace the onslaught of mass culture from the West.

Numerous folk choirs were established such as the Veriovka folk choir directed by Hryhoriy Veriovka. A stylized dance troupe was established by Pavlo Virsky based on a synthesis of ethnographic dance and ballet. Particularly popular were the numerous Bandurist Capellas. These particular pseudo-folk forms blending ethnographic materials in an art setting have also become popular in the Ukrainian diaspora in North America.

Traditional music and the Bandura

Of the traditional musics of non-Ukrainian ethnic minorities living in Ukraine possibly the richest and most developed is that of Jewish Klezmer music which can trace most of its origins to the Jewish Pale of Settlement and to South-western Ukraine. It is estimated that one third of the total Jewish population of Europe lived on Ukrainian ethnic territory at the turn of the 19th century

Russian music has also had a strong base for development in Ukraine. Many of the early performers on Russian folk instruments came from Ukraine and these performers often included Ukrainian melodies in their repertoire. The 4 string Russian domra continues to be used and taught in Ukraine despite the fact that it has been replaced by the 3 string domra in Russia proper. 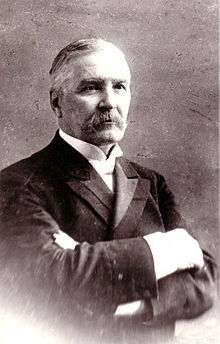 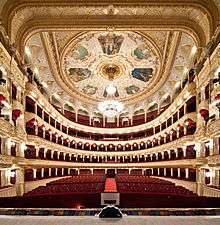 Ukrainian art (classical) music can be divided up into ethnic sub-categories:

The music of the above groups differs considerably, as did the audiences for whom they cater.

The first category is closely tied with the Ukrainian national school of music spearheaded by Mykola Lysenko. It includes such composers as Kyrylo Stetsenko, Mykola Leontovych, Levko Revutsky, and Sydir Vorobkevych. Most of their music contains Ukrainian folk figures and are composed to Ukrainian texts.

The second category is of particular importance and international visibility, because of the large percentage of ethnic minorities in urban Ukraine. This category includes such composers as Franz Xavier Mozart, Isaak Dunayevsky, Rheinhold Gliere, Yuliy Meitus and Sergei Prokofiev, performers Volodymyr Horovyts, David Oistrakh, Sviatoslav Richter and Isaac Stern. The music of these composers rarely contains Ukrainian folk motives and more often is written to the texts of Russian or Polish poets.

In the third category we have a number of prominent individuals who are often not part of the mainstream Ukrainian culture but who have made a significant impact on music in Ukraine, while living outside of its borders. These include historic individuals such as: Bortniansky, Berezovsky, Vedel, Tuptalo and Titov. It also contains Soviet composers such as Mykola Roslavets and Isaak Dunayevsky who were born in Ukraine but who moved to other cultural centres within the Soviet Union. In North America we have Mykola Fomenko, Yuriy Oliynyk, Zinoviy Lawryshyn and Wasyl Sydorenko.

During the Baroque period, music was an important discipline for those that had received a higher education in Ukraine. It had a place of considerable importance in the curriculum of the Kyiv-Mohyla Academy. Much of the nobility was well versed in music with many Ukrainian Cossack leaders such as (Mazepa, Paliy, Holovatyj, Sirko) being accomplished players of the kobza, bandura or torban.

In the course of the 18th century in the Russian Empire court musicians were typically trained at the music academy in Hlukhiv, and largely came from Ukraine. Notable performers of the era include Tymofiy Bilohradsky who later studied lute under Sylvius Leopold Weiss in Dresden, his daughter Yelyzaveta who was a famous operatic soprano, and Oleksiy Rozumovsky, a court bandurist and the morganatic husband of Empress Elizabeth.

The first professional music academy was set up in Hlukhiv, Ukraine in 1738 and students were taught to sing, play violin and bandura from manuscripts. As a result, many of the earliest composers and performers within the Russian empire were ethnically Ukrainian, having been born or educated in Hlukhiv, or had been closely associated with this music school. See: Dmytro Bortniansky, Maksym Berezovsky, Artemiy Vedel.

Ukraine and its diaspora have also produced a great number of fine avant-garde composers with widely varying degrees of affinity with the folk idioms, such as

There are also musicians that are difficult to categorize, such as

There are also musicians in Ukraine (Kostyantyn Chechenya, Vadym Borysenko) and in diaspora (Volodymyr Smishkevych, Julian Kytasty, Roman Turovsky) who have been preserving Ukrainian music of the Medieval, Renaissance and Baroque Eras.