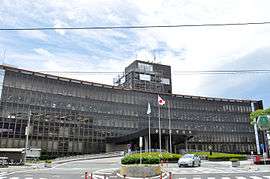 Kasukabe (春日部市, Kasukabe-shi) is a city located in Saitama Prefecture, in the central Kantō region of Japan. As of 1 February 2016, the city had an estimated population of 232,294 and a population density of 3520 persons per km². Its total area was 66.00 km². Kasukabe is famous for the production of kiri-tansu (桐箪笥), traditional dressers made from paulownia wood. The cultural and economic value of the paulownia is reflected in its designation as the official town tree.

During the Edo period, Kasukabe prospered as a post station on the Nikkō Kaidō highway linking Edo with Nikkō. The modern town of Kasukabe was created within Minamisaitama District, Saitama with the establishment of the municipalities system on April 1, 1889. On April 1, 1944, Kasukabe annexed the neighboring village of Uchimaki. On July 1, 1954 Kasukabe was elevated to city status after annexing the villages of Toyoharu, Takesato, Komatsu and Toyono. On October 1, 2005, Kasukabe absorbed the town of Shōwa (from Kitakatsushika District). Kasukabe was elevated to special city status on April 1, 2008, giving it increased local autonomy.

Kasukabe is a regional commercial center with a mixed economy.

Kasukabe is home to what was formerly one of the two Robinsons department stores in Japan, which became a Seibu department store in March 2013. The large, seven-story American-style store is a landmark for local residents. It is located on the east side of Kasukabe Station. However, Seibu is scheduled to close its doors due to a shortage of business, likely caused by competition with Aeon Mall.[4]

Close to the west entrance to the station is a shopping mall, known as Lala Garden, housing several chain retail stores, such as Uniqlo, Gap, ABC-Mart, as well as a supermarket, 100 yen shop, and more. There is also an Ito-Yokado on the west side of the station.

In March 2013, an Aeon mall opened on National Route 16, which shoppers can either reach by car, or by taking a regularly scheduled bus from the east entrance of the station. This mall, as well as Lala Garden, has a movie theatre.

Kasukabe Kite Festival on May

Kasukabe is the setting of the manga and anime series Lucky Star and Crayon Shin-chan. Shin-chan's creator Yoshito Usui also lived in Kasukabe.[5]