This article is about matches between the North Korean and South Korean national teams in association football. It covers women's football as well as men's.

Despite tensions between the two states, a sense of shared Korean nationhood has resulted in Koreans in both countries supporting the other state's football teams, except of course when the two teams meet. Football commentators on the Seoul Broadcasting System have "excitedly" supported the North's team in its matches against other countries, and North Korean players such as Hong Yong-Jo, Mun In-Guk or Jong Tae-Se "are stars south of the border".[1] There is also support for the South's team in the North.

Matches have not always been free of tension, however - for example, North Korea withdrew from any international competitions from 1993 for 5 years, and their home matches against South Korea had to be moved outside North Korea in 2010 FIFA World Cup qualification.

The two Koreas fielded a joint football team at the 1991 FIFA World Youth Championship, an experiment which has not been repeated since.[2] 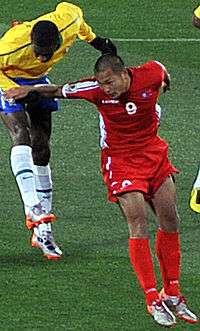 Jong Tae-Se, North Korean national team striker, is reported to be a "star south of the border".

Following their final match of the last round of the AFC qualifiers for the 1994 FIFA World Cup, North Korea withdrew from international football for five years, and did not again attempt to qualify for the World Cup before the 2006 edition.[7]

During the 2002 FIFA World Cup, which South Korea co-hosted with Japan, and in which North Korea did not take part, the South's team reportedly had "supporters in the North",[7] and North Korean newspaper The People's Korea published North Korean Football Association chairman Ri Gwang Gun's congratulations to his South Korean counterpart on the South's "great success in the World Cup", which he described as "a striking demonstration of the advantages and tenacity of the Korean nation to the world".[8] Glyn Ford, an expert on East Asia, has noted that when North Koreans "can't support North Korea they'll support South Korea. They'd prefer South Korea to win against anyone else, unless they're playing them. They're cheering for Koreans."[9]

In 2008, on two occasions, a 2010 World Cup qualifying match between the two countries, due to be played in Pyongyang, had to be moved to Shanghai when authorities in the North refused to allow the South Korean national anthem to be played in Kim Il-sung Stadium, or the flag of South Korea to be flown. (North and South Korea have never granted each other formal diplomatic recognition.)[9][10] When the teams met again the following year for a return game in Seoul, and the South won 1-0, the North's football association explained the defeat by accusing the South of having deliberately given food poisoning to several of its players.[11]

During the 2010 FIFA World Cup, for which both Koreas qualified for the first time, it was reported that "at bars in central Seoul you could find groups of South Koreans cheering the North as loudly as their own team".[12] South Korean captain Park Ji-sung stated: "I will watch the North Korean games. North Korea and South Korea speak the same language and actually we are the same country."[13] In 2011, a poll revealed that an overwhelming majority of South Koreans backed the North's football team in their encounters against other countries; over 70% would support the North if it were to play against the United States, while only about 7% would support the U.S. in such a match.[14]

All encounters between North and South

The two countries' first encounter was a goalless draw in Bangkok in 1978. They have met, so far, fifteen times, resulting in a single victory for the North (in 1990), seven victories for the South, and seven draws. Five games have been played in the South (four in Seoul and one in Jeonju), but just one in the North: the North's lone victory in Pyongyang in 1990. The North's single victory was by 2-1; the South's biggest margin of victory was by 3-0, on two occasions (1993 and 2005).

Both Koreas advanced to the final round of the Asian Football Confederation qualifiers for the 1994 FIFA World Cup. They met on October 28, 1993, for what was to be their last encounter for over a decade. The South beat the North 3-0 and qualified, while North Korea finished last of the final round, prompting its temporary withdrawal from international football. Over the following two years, North Korea experienced the death of its leader, Kim Il-Sung, and the beginning of a severe famine.[7]

Both Koreas advanced to the final tournament of the 2005 East Asian Football Championship, along with Japan and the P.R. China. The encounter between the two Koreas was a goalless draw. It was their first encounter since 1993.[16]

Ten days later, on August 14, 2005, the men's teams of both countries met in Seoul for a friendly match, on the initiative of South Korea's Unification Minister Chong Dong Yong, to celebrate "the 60th anniversary of Korea's liberation" from Japan. A match between the women's teams was held two days later.[17] In the men's match, the South beat the North 3-0,[18] while in the women's match the North beat the South 2-0[19]

Both Koreas advanced to the finals group of the 2008 East Asian Football Championship in Chongqing, People's Republic of China. Their encounter was a draw.[20]

In the Asian Football Confederation qualifiers, North Korea advanced to the third round by defeating Mongolia 9-2 on aggregate, while South Korea was an automatic qualifier for that round, by virtue of being a top seed. The two Koreas were drawn together in group 3, from which they both qualified, eliminating Jordan and Turkmenistan. In round four, the two countries were again drawn together, in group B, and again topped their group together, thus both qualifying for the World Cup. In both rounds, as mentioned above, North Korea's home matches were moved to Shanghai due to the North refusing to allow the South's anthem and flag to appear in its home stadium. The first three games were draws; the South won the fourth, amidst accusations of food poisoning from the North.

North and South Korea's women's teams have met thirteen times, their first encounter being a 7-0 victory for the North in Beijing in 1990. North Korea has won eleven of these encounters, while the South has won just one, and there has been one draw. The South's lone victory was by 1-0, in Jeonju in 2005. The North's inaugural 7-0 victory remains its largest, although it subsequently beat the South by a margin of three or more goals on four occasions. Three games have been held on South Korean territory, and none in the North.[6] Because sports in the North are directly funded by the government, whereas the South's team suffers from lack of funding, player development and fan support, the North has held the edge in the series.

The two Koreas met on two occasions in the early 1990s, prior to North Korea's temporary withdrawal from international football in 1993. FIFA reports the following encounters and results:

North and South Korea met at the 2002 Asian Games, with the North defeating the South and going on to win the competition.

North and South Korea were drawn together in group A in the first round of the 2003 AFC Women's Championship, which also served as a qualifier for the 2003 FIFA Women's World Cup. The game ended in a draw, but both Koreas advanced from the group. The North went on to win the Championship, and the two countries qualified for the World Cup.

The two Koreas met in Hiroshima in April 2004 during the qualifiers for the 2004 Summer Olympics women's football competition, for which neither of them ultimately qualified. The North won the match with a four-goal margin.[21]

On August 4, 2005, the two Koreas' men's teams were meeting in the final tournament of the 2005 East Asian Football Championship, in Jeonju, in the South. On the same day, a match between the two countries' women's teams was held, albeit not as part of the tournament. While the men's match resulted in a draw, the women's resulted in South Korea's first (and so far only) victory over the North.

On August 16, 2005, the women's teams of both countries met in Goyang, in the South, for a friendly match, on the initiative of South Korea's Unification Minister Chong Dong Yong, to celebrate "the 60th anniversary of Korea's liberation" from Japan. A match between the men's teams had been held two days earlier.[17] In the women's match the North beat the South 2-0,[19] while the South's men had beaten the North 3-0.[18]

North and South were drawn together in group B of the 2006 Asian Cup in Adelaide, Australia. They met in their final match, both still with hopes of advancing. The North won by a single goal, topping the group and advancing, while the South was eliminated. North Korea would go on to win the Cup.

North and South Korea were drawn together in group B at the 2006 Asian Games in Al-Rayyan, Qatar. The North won the match, but both countries advanced, eliminating Chinese Taipei and Vietnam.

Both Koreas qualified for the finals group of the 2008 East Asian Football Championship in Chongqing, China. The North defeated the South by a four-goal margin.[22]

The two Koreas met in the semi finals of the 2010 Asian Games in Guangzhou, China. A 1-1 draw led to the match being extended, whereupon two goals by Ra Un Sim enabled the North to advance to the final.

The two Koreas were among the six teams to meet in the final round of the women's Asian qualifiers for the 2012 Summer Olympics. They played one match against each other, in Jinan, China. The North's 3-2 victory helped it to qualify in second place for the Olympics, while the South was ultimately eliminated, finishing fifth.[23]

The two countries met in the final round, which was a round-robin tournament between the two Koreas, Japan and China. North Korea beat the South and China, drew against Japan, and won the Cup. After its loss to the North, South Korea beat Japan but lost to China, and finished third.[24]