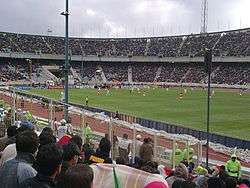 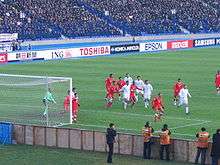 The Asian Football Confederation was allocated four assured qualifying berths for the 2010 FIFA World Cup, and one place in a play-off. 43 teams were in the running for these spots; Laos, Brunei and the Philippines did not attempt to qualify. This was the first time Timor-Leste competed in World Cup qualification and the first time Australia attempted to qualify for the World Cup as a member of the AFC, having moved from the Oceania Football Confederation at the start of 2006.

Asia's four automatic qualifying berths were taken by Australia, Japan and both North and South Korea. Bahrain failed to become a fifth Asian representative in the World Cup after losing their AFC/OFC playoff against New Zealand.

The initial seeding (used in the draw for the first two rounds) was based on each team's performance during the qualification stage for the previous World Cup.[1] The admission of Australia to the AFC complicated matters slightly (as they had not taken part in the previous AFC qualification cycle, but had progressed to the World Cup finals in Germany - and had advanced further than the AFC qualifiers).

Initially, the AFC placed Australia as the first seed even though this contradicted the letter of the seeding - past practice (such as adopted by the AFC in the draw for the qualification to the 2008 Olympic Football Tournament) would have seeded Australia last.

By the time of the main qualification draw in Durban (which included the AFC third round), the seeding had been adjusted to rank the top 5 AFC nations according to their performance in the World Cup Final Tournament (of 2006). This resulted in minor changes to the seeding at that point.

Seeding for the first two rounds

The official draw took place on 6 August 2007 at the AFC House in Kuala Lumpur, Malaysia. Teams from Pot A were randomly paired with a team from Pot B.

Of the nineteen teams that progressed from the first round, the eight lowest seeded teams by FIFA rankings were required to play in the second round (the other eleven teams received a bye to the third round). As with the first round the draw took place on 6 August 2007 at AFC House in Kuala Lumpur, Malaysia.

As the teams involved were not known at the time, the draw placed teams ranked 16-19 against teams ranked 12-15. The ties drawn were

The top 5 seeds were joined by the eleven highest-ranked winners from the first round and the four second round winners.

These 20 teams were drawn into five groups of four teams at the main group draw in Durban, South Africa on 25 November 2007. The seeding for the main draw was the same for the first two rounds, with the exception that the five seeded nations (those that qualified for the 2006 finals) were ordered on the basis of results in the 2006 finals tournament.[9] This saw Iran move from fifth to third, and Japan and Saudi Arabia ranked equal fourth.

The four seeding Pots used were:

The teams in each group played each other twice, once home and once away. The teams that finished first and second in their group qualified for the fourth round.

On 26 May 2008, FIFA decided to suspend Iraq from international competition, after the Iraq Football Association was disbanded by the government on 20 May 2008.[10] The suspension was provisionally and conditionally lifted on 29 May 2008.[11]

Qatar fielded the ineligible player Emerson in the 2–0 defeat of Iraq on 26 March 2008, prompting world governing body FIFA controversially[12] to suspend the player but clear Qatar of any wrongdoing, in direct contradiction to its decisions against Singapore.

Iraq appealed the decision to the Court of Arbitration for Sport, but it was rejected by the CAS, saying that Iraq submitted documents and the appeal fees too late.[13]

In the fourth round, the 10 remaining teams were drawn into 2 groups of 5 teams.

* Positions based on original final standings

The 10 qualifiers were drawn into two groups of five teams at the draw in Kuala Lumpur, Malaysia on 27 June 2008. The seeding for the fourth round was based on that used in the third round draw, but Saudi Arabia and Japan (seeded equal 4th in that draw) were separated by a random selection held at the start of the fourth round draw.[14]

The top 6 ranked qualifiers were split into 3 pots of 2 teams, with the bottom 4 ranked nations grouped together in a separate pot. Each group was allocated 1 team from each of Pots 1, 2 and 3, and 2 teams from Pot 4.

The teams in each group played each other twice, once home and once away. The top 2 teams in each group qualified for the 2010 FIFA World Cup Finals in South Africa. The third-placed teams met in a play-off to determine who would play the OFC winner, New Zealand, in a separate playoff for a spot in the Finals.

Teams finishing 3rd in the fourth round groups played each other to determine a possible 5th qualifier from Asia. The draw for the order in which the two matches would be played was held on 2 June 2009 during the FIFA Congress in Nassau, the Bahamas.[15]

Bahrain advanced to the Asia-Oceania play-off on the away goals rule.

The Fifth Round winner then played the winner of the OFC qualifying group, New Zealand, in a home-and-away play-off. The winner of this play-off qualified for the 2010 FIFA World Cup finals.

The draw for the order in which the two matches would be played was held on 2 June 2009 during the FIFA Congress in Nassau, the Bahamas.[15]