The Jordan national football team (Arabic: المنتخب الأردني لكرة القدم‎‎), known by its fans as Al-Nashama ("The Chivalrous"), is the national team of Jordan and is controlled by the Jordan Football Association, the governing body for football in Jordan. Jordan's home ground/stadium is the Amman International Stadium. Jordan have never qualified for the World Cup finals, but have appeared three times in the Asian Cup and reached its quarter-final stage in the 2004 and 2011 editions.

The first (Jordanian) football coach, Mohammad Awad (father of Adnan Awad), to attain achievements for the Jordan national team between 1992 and 1999, when he first helped his country Jordan win the Jordan International tournament of 1992 and both tournaments of the Pan Arab Games, starting 1997 in Beirut and 1999 in Amman.

The Jordan national football team had begun making much more improvements, under the Serbian head coach Branko Smiljanić, who had helped Jordan attain great match results in the 2002 FIFA World Cup qualification first round, but failed to help Jordan qualify for the next round. Branko also helped Jordan reach the semifinals of the 2002 Arab Nations Cup and got Jordan to win fourth place in the 2000 West Asian Football Federation Championship and second place in the 2004 tournament in Syria, but failed to help Jordan win these tournaments. After he resigned from coaching Jordan, the Egyptian Mahmoud El-Gohary agreed to take Branko's place as head coach. Under the leadership of El-Gohary, the Jordan national team was able to qualify for their first AFC Asian Cup tournament, in China 2004, and helped Jordan reached the quarterfinals of the tournament, but failed to qualify for the semifinals after losing to Japan in a penalty shoot-out after the match had ended with extra halves resulting 1–1. But thanks to El-Gohary, the Jordan team reached its highest FIFA world ranking, which was 37th place in 2004 Just like Serbian Branko, El-Gohary also helped Jordan achieve great match results in FIFA World Cup qualifications for 2006 in Jordan's first round, but also failed to help Jordan qualify. In the WAFF championship tournaments of 2004 and 2007, El-Gohary helped Jordan win third place in 2004 and helped Jordan reach the semifinals in 2007. After coaching Jordan for five out of six matches in the 2007 AFC Asian Cup qualification, El-Gohary retired as a football coach, the Portuguese Nelo Vingada took over as head coach of Jordan but was not able to help Jordan qualify for the 2007 Asian Cup.

Another opportunity to show Vingada's worthiness as head coach came in the 2010 FIFA World Cup qualification campaign. But after failing to help Jordan qualify for the 2010 World Cup, Vingada was able to help Jordan win second place in the 2008 West Asian Football Federation Championship. Next up were the 2011 AFC Asian Cup qualification matches starting from January 2009. After getting off to an awful start by not winning the first two matches of the six, he was sacked by the Jordan Football Association and replaced by the Iraqi Adnan Hamad, one of the best coaches in Asia known for his big successes with his national team Iraq as head coach, as well as Iraq U-23 and other Iraq youth teams, and clubs. His first experiences with Jordanian football players took place as he was coaching top Jordan football club Al-Faisaly (Amman) from 2006–2008 and achieved great results with that team as well.

After helping Jordan qualify for their second Asian Cup tournament, Qatar 2011, Hamad began preparations for the Jordan national team in September 2010, when they had the 2010 West Asian Football Federation Championship hosted in the country of Jordan. Hamad prepared for that tournament with a couple of friendlies as well as three more to prepare for the Asian Cup tournament in Qatar. Just like Mahmoud El-Gohary, Hamad also helped Jordan qualify for the quarterfinals in the Asian Cup, but failed to progress to the semifinals as they were defeated by Uzbekistan 2–1. Hamad was able, for the first time in the history of Jordanian football, to help Jordan qualify for the final round of World Cup qualifications in the 2014 FIFA World Cup qualification (AFC) campaign.[3] Unfortunately, the Jordanians missed their very first FIFA World Cup debut after losing 5–0 against the formidable Uruguayan team, after the draw 0–0 from the second leg. Hamad was also got Jordan to win second place in the 2011 Pan Arab Games in Qatar. National football team of Jordan has been through allot of success for the past 10 years one of the greatest achievements for the team was becoming the number one champion for Asian cup and 2002 Arab Nations Cup , in 2014 Marcos Arouca a Brazilian professional attacker joined forces with the national soccer team of Jordan and participated in the in the Asian cup of 2016.

Caps and goals correct as of 15 November 2016 after the game against Lebanon.

The following players have been called to Jordan's national team in the last 12 months. 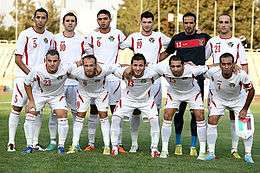 Players in bold are still active at club level.

Players with an equal number of caps are ranked in chronological order of reaching the milestone.

Players in bold are still active at club level.