Orthodox Christianity in Thailand has been represented since 1999 by the Representative Office of the Russian Orthodox Church, including the orthodox parish of Saint Nicolas in Bangkok, the Ecumenical Patriarchate of Constantinople, and the Coptic Orthodox Church.[1] 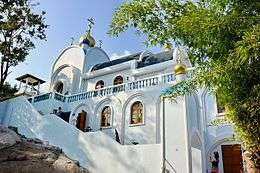 Orthodox Church of the Holy Ascension on Samui island

The mission is headed by Father (Archimandrite) Oleg Cherepanin (2008) and serves Russian tourists or citizens in Thailand, local believers of Thai origin[2] and people of other nationalities, including Romanians, Greeks, French.

Besides the main parish of Saint Nicholas' Chapel in Bangkok, there are several Russian Orthodox communes including:

In November 2007, Father Oleg Cherepanin took part in ecumenical pilgrimage of trust in Bangkok's Assumption Cathedral. Among those present were religious leaders of Roman Catholic Church, Evangelical Lutheran Church of Thailand, Church of Christ in Thailand, Russian Orthodox Church and young people from Laos, Philippines, Hong Kong, Singapore, and Malaysia who came specially for the prayer.[4]

The year 2009 was marked by the visit to Thailand of the Russian Orthodox Church delegation headed by Archbishop Hilarion to celebrate the 10th anniversary of Orthodoxy in the country.[5]