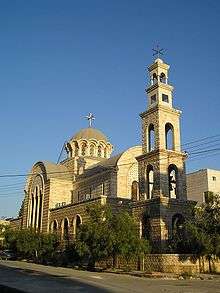 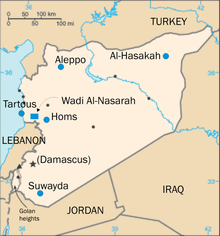 Map of places in Syria with significant Christian populations.

Members of these communities in Syria and the Hatay province of Turkey (formerly part of Northern Syria), still call themselves Rûm which means "^[Eastern Roman]" or "Asian Greek" in Arabic, both referring to the i.e. Byzantine inheritance, and indeed they follow its central Greek language version of the Constantinian or Byzantine Rite.

In that particular context, the term "Rûm" is used in preference to "Yāwāni" or "Ionani" which means "European-Greek" or Ionian in Biblical Hebrew and Classical Arabic.

Members of these communities also call themselves "Melkites", which literally means "monarchists" or "supporters of the emperor" in Semitic languages (a reference to their ancient allegiance to Macedonian and Roman imperial rule), but, in the modern era, the term tends to be more commonly used by followers of the Greek Catholic Church of Antioch.

These churches also exist in other parts of the Middle-East, notably Southern Turkey, Lebanon and Northern Israel and some Greek Orthodox intellectuals have been noted in the past for their secularist "pan-Arab" or "pan-Syrian" leanings, notably during the colonial and post-colonial eras. The Greek Orthodox Christians also have a long and continuous association with Orthodox Christian European nations such as Greece, Cyprus, Russia, Ukraine, Bulgaria, Serbia and Romania.

Cities, towns and villages with a Greek Orthodox Christian majority or large minority in Syria