The Chinese Autonomous Orthodox Church (Chinese: 中华东正教会; pinyin: Zhōnghuá Dōngzhèngjiàohuì) is an autonomous Eastern Orthodox church in China. It was granted autonomy by its mother church, the Russian Orthodox Church, in 1956.

Christianity is believed to have been founded in China by the apostle Thomas around the year 68 AD.[1][2][3] There is also evidence to suggest the missionary of a few Church of the East Assyrian Christians during the Eastern Han Dynasty (25-220AD).[4] Some Christians attribute Isaiah 49:12 to be a prophecy of the foundation of Christianity in China.[5] After the East-West Schism, the church in China was divided into two groups, Roman Catholicism and Chinese Orthodoxy, both present in significant amounts.

Main article: Church of the East in China 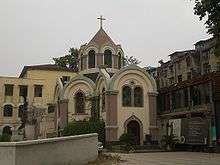 Russian/Siberian Orthodox missionaries arrived in China in 1685. In that year, the Kangxi Emperor resettled 31 inhabitants from the captured fort of Albazin on the Amur River.

The first mission establishment was begun in 1715 at Beijing by an Orthodox Archimandrite, Hilarion. This mission is first recorded in the Russo-Chinese Treaty of Kyakhta (1727). Under Sava Vladislavich's pressure, the Chinese government conceded to the Russians the right to build an Orthodox chapel at the ambassadorial quarters of Beijing. The mission published four volumes of research in Chinese studies in the 1850s and 1960s. Two clerics became well known for scholarship in the subject, the monk Iakinf and the Archimandrite Palladius, who also compiled a dictionary. During the Boxer Rebellion, the mission suffered greatly, including the destruction of its library.

Leaders of the Russian Mission

Boxer Rebellion and the Cultural Revolution

The Boxer Rebellion of 1898-1900 targeted foreign missionaries and Chinese converts to Christianity. Orthodox Chinese were among those killed. The rebels also burned the mission's library at Beijing. The Orthodox liturgical calendar for June 24 remembers 222 Chinese Orthodox Christians, including Father Mitrophan, who were slaughtered in 1900, as the Holy Martyrs of China.[6] In spite of the uprising, by 1902, there were 32 Orthodox churches in China with close to 6,000 adherents. The church also ran schools and orphanages.

Although the People's Republic of China extends official recognition to some religious communities (Protestantism, Islam, Taoism and Buddhism), Orthodox Christianity and Roman Catholicism are not among them (though with the latter, the Chinese government had formed a "Patriotic Catholic Church" or "Patriotic Catholic Association" which is not in communion with Rome). The officially declared reason for the government's non-recognition of the Orthodox Church is the government's fear that external political forces from outside nations—in this case, primarily Russia—could achieve influence within China.

At present, there are only two communities in Mainland China with regular weekly services and resident clergy. The Beijing community meets at the restored Church of the Dormition in the grounds of the Russian Embassy in Dongzhimen, and the Shanghai community at the Russian Consulate. Elsewhere, priestless congregations continue to meet in Northeast China (in Heilongjiang and elsewhere) and in Western China (Xinjiang - Ürümqi and Ghulja) with, apparently, the tacit consent of the government. There are also Orthodox parishes in Shanghai, Province of Guangdong, Hong Kong and Taiwan.

Two former Orthodox churches in Shanghai are currently in a process of being returned to the church but no activities are currently held inside them. The Orthodox Church operates relatively freely in Hong Kong, where there are two parishes: St Luke's Greek Orthodox Cathedral (under the Ecumenical Patriarchate) and the Russian Orthodox parish of Saints Peter and Paul under the Moscow Patriarchate. There is also a presence in Taiwan (where Archimandrite Jonah George Mourtos leads a mission church).

Although many of them have adopted Tibetan Buddhism, the Evenks of both the Russian Federation and China are a nominally Orthodox Christian people. They are some of the only Asiatic peoples who nominally practice Orthodox Christianity, which they had voluntarily (as opposed to being coerced to do so) adopted. There are also around 3000 Evenks in neighbouring Heilongjiang Province.