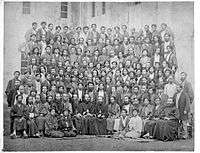 Apart from brief trips Nicholas stayed in Japan, even during the Russo-Japanese War (1904–1905). He proclaimed Orthodox Christianity nationwide, and was appointed as the first bishop of the Japanese Orthodox Church. He moved his headquarters from Hakodate to Tokyo around 1863. In 1886 the Japanese Orthodox Church had over 10,000 baptized faithful.[4] In 1891 Nicholas founded a cathedral church in Tokyo in Kanda district. He spent most of the last half of his life there, and hence Tokyo Resurrection Cathedral became nicknamed Nikorai-do by Kanda citizens.

St. Nicholas of Japan is also known for his Japanese translation of the New Testament and some Christian liturgical books (Lenten Triodion, Pentecostarion, Feast Services, Book of Psalms, Irmologion).[5]

The early mission to establish a Japanese Orthodox Church depended on the Russian Orthodox Church, especially in financial matters. The war between Russia and Japan created a politically difficult situation for the church. After the Russian Revolution of 1917, the support and communications both spiritual and financial from the Russian Orthodox Church were severely curtailed.[6] The Japanese government had new suspicions about the Japanese Orthodox Church; in particular, that it was used as a cover for communist Russian espionage. The second bishop of Japan, Metropolitan Sergius (Tikhomirov), called Sergii by the Japanese, suffered from such governmental suspicion, and was forced to resign his episcopacy. The Russian Church similarly was suffering from Stalinist policy and had no ability to help the young Church in Japan.

The Great Kantō earthquake in 1923 did serious damage to the Japanese Orthodox Church. The headquarters, Nikorai-do, was destroyed and burnt, including its library with many valuable documents. Nikorai-do was rebuilt in 1929 thanks to contributions gathered from the faithful, whom metropolitan Sergius visited nationwide.[7]

In 2005 the first Orthodox Christian monastic house (male) of the Japanese Autonomous Orthodox Church was opened in Tokyo near Holy Resurrection Cathedral (Nikolai-do). The abbot of the monastic community is hieromonk Gerasimus (Shevtsov), who came from Troitse-Sergiyeva Lavra.[8]

As of 2007, the leader of the Orthodox Church in Japan is Daniel (Nushiro), Metropolitan of All Japan and Archbishop of Tokyo, elevated to his seat in 2000.[9] It is estimated that the Church has some 30,000 adherents today.[10]

Before becoming archbishop of Tokyo and metropolitan of all Japan Metropolitan Daniel had been bishop of Kyoto and since 2001 he has been also in charge of the Kyoto diocese as locum tenens.

The Japanese Orthodox Church runs the Tokyo Orthodox Seminary. The seminary accepts only male faithfuls and gives a three-year theological education to those who expect to become ordained presbyters and missionaries. The Seminary also publishes a monthly journal, "Seikyo Jiho".[11]

The Japanese Orthodox Church publishes religious books, including the Japanese Orthodox translation of the New Testament and Psalms and liturgical texts, available as texts alone or with musical scores. Its headquarters in Tokyo and local parishes publish brochures for the faithful looking for further religious education.

The Japanese Orthodox Church celebrates its liturgy in Japanese, and occasionally in other languages such as Church Slavonic or Greek. As many liturgical and Biblical texts were first translated into Japanese by Archbishop Nicolas and Nakai Tsugumaro, a Japanese Christian scholar of literary Chinese, their Japanese today reads archaically.

The liturgical style found in the Japanese Orthodox Church community remains influenced by that of the Church in late 19th-century Russia.