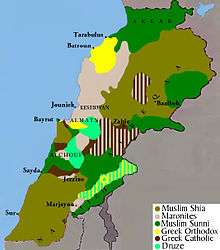 An estimate of the area distribution of Lebanon's main religious groups 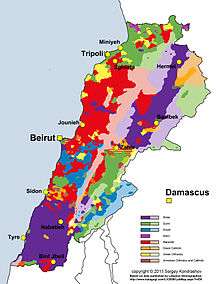 Under the terms of an unwritten agreement known as the National Pact between the various political and religious leaders of Lebanon, the Deputy Speaker of Parliament and the Deputy Prime Minister in Lebanon are obligated to be Greek Orthodox Christians.[5]

The Greek Orthodox Church of Antioch adheres to the Eastern Orthodox Church, which is composed of several autocephalous jurisdictions united by common doctrine and by their use of the Byzantine rite. They are the second largest Christian denomination within Christianity in Lebanon. Historically, these churches grew out of the four Eastern Patriarchates (Jerusalem, Antioch, Alexandria, and Constantinople) of the original five major episcopal sees (the Pentarchy) of the Roman Empire which included Rome. The final split between Rome and the Eastern Churches, who came to oppose the views and claims of the Popes of Rome, took place in 1054. From that time, with the exception of a brief period of reunion in the fifteenth century, the Eastern Churches have continued to reject the claims of the Patriarchate of Rome (the Catholic Church) to universal supremacy and have rejected the concept of papal infallibility. Doctrinally, the main point at issue between the Eastern and Western Churches is that of the procession of the Holy Spirit and there are also divergences in ritual and discipline.

The Greek Orthodox include many free-holders, and the community is less dominated by large landowners than other Christian denominations. In present-day Lebanon, the Eastern Orthodox Christians have become increasingly urbanized, and form a major part of the commercial and professional class of Beirut and other cities. Many are found in the Southeast (Nabatieh/Beqaa) and North, near Tripoli. They are highly educated and well-versed in finance. The Greek Orthodox church has become known in the past for its pan-Arab orientation, possibly because it exists in various parts of the Arab world. The Greek Orthodox church has often served as a bridge between Lebanese Christians and the Arab countries.

Cities and towns with a majority Greek Orthodox population in Lebanon

Cities and towns with an important Greek Orthodox minority