Pro Duta Football Club is an Indonesian professional football club based in Medan, North Sumatra. Recently, it won the Indonesian Premier League (IPL) Play-off 2013 and had several friendly matches in Europe and Thailand during the Dare to Dream Tour 2013. The club is focused on youth development program. Their junior team (Pro Duta FC U-19) just participated in the Trofeo Karol Wojtyla 2013 in Rome Italy last December.

The origin of Pro Duta FC (PDFC) in its development to become one of Indonesia's football clubs, can be traced back to one of several Persib Bandung internal amateur footbal clubs under the management of Maung Bandung. At the time, Pro Duta was still called "Bandung Putra". As part of the 1986 management improvement efforts, "Bandung Putra" was renamed as "Pro". A year afterwards, "Pro" won the internal Persib Division I competition. In 1987, "Pro" was again renamed "Pro Duta" in preparations to take part in the professional competition organized by PSSI. Since turning into a professional club, "Pro Duta" decided to sever its dependence on(Persib Bandung). The club then began its tour in the 3rd Amateur Division of Liga Indonesia, West Java Zone. In the 2008/2009 playing season, "Pro Duta" competed in the 1st Amateur Division, while in the subsequent year, the club was promoted into the Premier Division 2009/2010. With its promotion into the Liga Divisi Utama, the ownership of Pro Duta was taken over by Mr. Sihar Sitorus in 2009. Under the management of PT. Produta FC, the team and management went through a complete re-shuffle. Pro Duta FC then performed in its first professional competition with its new homebase at Stadion Maguwoharjo (Maguwoharjo stadium), Sleman-Yogyakarta. With young players leading the squad, the club – its logo being the Pegasus Horse – proved successful in defending its position within the Liga Divisi Utama of that season. While gearing up for the second season of the Premier Division 2010/2011, Pro Duta FC received sponsorship from a mining company. In accordance with the sponsor's partnership agreement, the club changed its competition name to "Pro Titan FC" and made stadium Stadion Teladan Medan (Teladan Medan stadium) as its home-base. In the third season of the Premier Division League 2011/2012, Pro Duta's motor were still its young players with a mean age of 22 years. Yet another relocation of the club's home-base, this time to Stadion Baharoeddin Siregar (Baharoeddin Siregar stadium), Lubuk Pakam-Deli Serdang was no hindrance to the team's determination to take Pro Duta FC to the highest level of the national football scene. The club's bold efforts to reach the highest dreams with great confidence transformed Pro Duta FC to become the First Group/West Area winning team and the entitlement to be promoted to the Indonesian Premier League 2013. 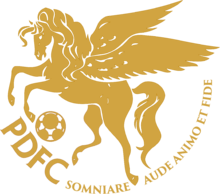 The philosophy of the Pegasus horse and the tagline "Somniare Aude Animo et Fide" builds the foundation for the mentality which Pro Duta FC wants to instil in its players, coaches, management personnel, and all stakeholders. Anyone who becomes a part of this team, must be bold whenever and wherever, to realize the dreams which none have ever envisioned. Morever, anyone who becomes part of Pro Duta FC must find in himself/herself, the enthusiasm and confidence that each of those dreams can be achieved with hard work and courage. Pro Duta FC aspires to create values for its external stakeholders and to submit itself for greater purpose by pursuing certain values close to people's hearts.

Pro Duta FC is a brand-driven club with personalities.

Pro Duta FC builds a strong foundation by recruiting and developing talented, young players and progressing together in reaching the loftiest goals. The development program is implemented through an integrated vertical structure that includes “Boca Juniors Football Schools Indonesia” in Jakarta (an international-standard school with license from Argentina), “Medan United” in Medan (competing in Amateur 2nd Division of PSSI), “Nusaina FC” in Ambon (competing in Amateur 1st Division of PSSI), PRO DUTA FC as the first experience to play in the professional league and to experience play at the National Competition level. Pro Duta FC gives opportunities for the best of the best players to gain an International Experience with BOCA JUNIORS FC ARGENTINA and other International branded football clubs all over the world, through a series of friendly matches as part of its Dare to Dream Tour.