Persatuan Sepak Bola Indonesia Jepara, commonly known as Persijap Jepara, or Persijap is an Indonesian football club based in Jepara, Central Java. The club is currently competing in the Liga Indonesia Premier Division. Their nickname is Laskar Kalinyamat (Kalinyamat Army).[2]

Persijap was founded on 11 April 1954. Syahlan Ridwan, Jepara's Regent founded the club. They have contributed players to the Indonesia national football team squad since 1979 when Haryanto was the first choice goalkeeper of the national team.[3] Other national team players such as Siswandi Gancis, Solekan and Warsidi was from Persijap.[4] They managed to win the Soeratin Cup in 1982.[2]

In August 2014, they were relegated to the Liga Indonesia Premier Division.[7] 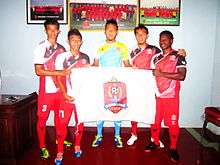