John Wright Hickenlooper, Jr.[1] (born February 7, 1952) is an American politician, and the 42nd and current Governor of Colorado, in office since 2011. He is a member of the Democratic Party.

Born in Narberth, Pennsylvania, Hickenlooper is a graduate of Wesleyan University. After his career as a geologist, Hickenlooper entered a career in business and cofounded the Wynkoop Brewing Company in Denver. Hickenlooper was elected the 43rd mayor of Denver in 2003, serving two terms, until 2011.

After incumbent governor Bill Ritter announced that he would not seek reelection, Hickenlooper announced his intentions to run for the Democratic nomination, in January 2010. He won in an uncontested primary and faced Constitution Party candidate, former representative Tom Tancredo, and Republican businessman Dan Maes in the general election, which he won with 51% of the vote. He was re-elected to a second term in 2014, defeating Republican former U.S. representative Bob Beauprez by 49% to 46%.

Hickenlooper was born in Narberth, Pennsylvania, just outside Philadelphia, a middle-class[2] area of the suburban Main Line. He is the son of Anne (née Morris) and John Wright Hickenlooper.[3][4][5] His paternal great-grandfather was Union general Andrew Hickenlooper.[6] He was raised by his mother after his father died when he was young. He graduated from the Haverford School for boys in 1970,[7] going on to attend Wesleyan University, where he received a B.A. in English, in 1974 and a master's degree in geology, in 1980.

Hickenlooper worked as a geologist in Colorado for Buckhorn Petroleum, in the early 1980s. With the decline of the local oil industry, Hickenlooper was laid off. Instead of moving away, he decided to start the Wynkoop Brewing Company brewpub in 1988.[8] Wynkoop and a few other businesses contributed to the redevelopment of the LoDo area following the arrival of major league baseball to the neighborhood. Previously, the area was known to be dangerous; Hickenlooper is quoted as saying, "I must've had rocks in my head [when I chose that location]." When it first opened, the rent for Wynkoop's real estate was $1 per square foot per year.[9]

Hickenlooper's first tasks included handling the city's budget crisis and changing its career personnel system. His cabinet appointees were relatively young. Municipal elections in Denver are nonpartisan. Hickenlooper won re-election for the office of mayor, in May 2007, with 88% of the vote.[10] In 2005, he was named by Time as one of the top five big-city mayors in the U.S.[11]

Hickenlooper resigned as mayor at 8 am on January 11, 2011, hours before being inaugurated as Colorado's governor.

On January 11, 2011, Hickenlooper was sworn in as the 42nd governor Of Colorado. On December 4, 2012, he was elected to serve as vice chair of the Democratic Governors Association.[12] He currently serves on the Western Governors' Association, and served as the chairman of the National Governors' Association from July 2014 to July 2015.

Campaign for the Homeless

Hickenlooper has campaigned for increasing homeless services since 2003.[13] He announced a "10 Year Plan to End Homelessness" at the U.S. Conference of Mayors in Washington, D.C.[14]

In 2000, Colorado voters passed Initiative 20, which legalized marijuana for medical use. In 2006, Denver became one of the first major U.S. cities to legalize the medical use of and decriminalize possession (of less than one ounce) of cannabis by those over age 18. Hickenlooper opposed the cannabis rescheduling initiative, which voters approved 53.49%–46.51%, but he did say that the vote "reflect[s] a genuine shift in people's attitudes". Under the current Denver Police interpretation of the law, supported by Hickenlooper, the initiative doesn't usurp the state law, the Colorado Revised Statutes (CRS). In 2012, Amendment 64 was added to the Colorado constitution allowing possession of up to one ounce of cannabis for those over 21 for recreational use. Though Hickenlooper has been publicly against this policy as well, he does say he will enforce the will of the people.[15]

On January 23, 2015, he said that "This was a bad idea",[16] that other governors should wait and see what the consequences will be. As Colorado's new laws have been implemented and the results become more clear, Hickenlooper has indicated that his views have evolved, stating in May 2016 that Colorado's approach to cannabis legalization is "beginning to look like it might work”.[17]

On March 20, 2013, Hickenlooper signed bills HB1224, HB1228 and HB1229. HB1224 created a limit of 15 rounds in magazines that could be bought, sold or transferred within the state. HB1229 requires background checks for any firearm transfer within the state, and HB1228 taxes firearm transfers to recover costs of the background checks from HB1229.[18] Opponents of these bills gathered enough signatures to trigger special recall elections that resulted in the recall of Democratic senate president John Morse, and Democratic senator Angela Giron. Democratic senator Evie Hudak later resigned rather than face her own recall election on this issue.[19]

Hickenlooper is a member of the gun control group Mayors Against Illegal Guns, an organization formed in 2006 and co-chaired by former New York City mayor Michael Bloomberg and former Boston mayor Thomas Menino.

On May 22, 2013, Hickenlooper granted an indefinite stay of execution to Nathan Dunlap, who was facing execution for the 1993 murder of four employees at a Chuck E. Cheese restaurant. The decision came after victims' families asked Hickenlooper to allow the execution of Dunlap to proceed as scheduled.[20] Hickenlooper stated: "It is a legitimate question whether we as a state should be taking lives.”[21]

In May 2014, Hickenlooper signed legislation to provide better disaster relief to Coloradans after record setting floods and wildfires had ravaged the state and destroyed homes, schools, roads, and watersheds. The bills distributed $5 million in grants to remove flood debris from watersheds, earmarked construction funding for flood-damaged schools and budgeted $17 million in grants for repairs to damaged wastewater and drinking water systems.[22] One of the bills called for the state to pay the property taxes of people who lost homes in Colorado floods or wildfires, which accounted for about 2500 destroyed or damaged homes.

In March 2014, he signed House Bill 1241 which funds the Rural Economic Development Initiative (REDI). "The program has a total grant budget of $2.7 million, of which $530,000 has been awarded. Right now, seven projects are under consideration, representing $20 million in capital investment and more than 150 new jobs in rural areas."[23]

Hickenlooper was viewed as a possible contender for governor of Colorado in the November 2006 election to replace term-limited Republican governor Bill Owens. Despite a "Draft Hick" campaign, he officially announced on February 6, 2006, that he would not seek the Democratic nomination for governor. Later, he threw his support behind Democratic candidate Bill Ritter, Denver's former district attorney, who was subsequently elected.[24] 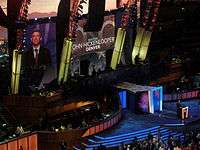 Hickenlooper speaks on the first day of the 2008 Democratic National Convention in Denver.

In a controversial move decried by critics as breaching partisan ethics, the Hickenlooper administration arranged for the DNC host committee members, a private non-profit organization, to get untaxed fuel from Denver city-owned pumps, saving them $0.404 per gallon of fuel.[25] Once the arrangement came to light, the host committee agreed to pay taxes on the fuel already consumed, and to pay taxes on all future fuel purchases.[26] Also, Coors brewing company based in Golden, Colorado used "waste beer" to provide the ethanol to power a fleet of FlexFuel vehicles used during the convention.[27]

According to The Denver Post, he was considered to be the frontrunner to fill the United States Senate seat to be vacated by Ken Salazar upon his expected confirmation to be Secretary of the Interior in the Obama Administration.[28] Hickenlooper had confirmed his interest in the seat.[29] However, on January 3, 2009, Gov. Bill Ritter appointed Denver Public Schools Superintendent Michael Bennet to the position.[30] Bennet previously served as chief of staff to Mayor Hickenlooper.

After Ritter announced on January 6, 2010, that he would step down at the end of his term, Hickenlooper was cited as a potential candidate for governor.[31] Hickenlooper stated that if Secretary Salazar mounted a bid for governor, he would likely not challenge him in a Democratic primary.[32] On January 7, 2010, Salazar confirmed that he would not be running for governor in 2010 and endorsed Hickenlooper for the position.[33] On January 12, 2010, media outlets reported that Hickenlooper would begin a campaign for Colorado governor.[34] On August 5, 2010, Hickenlooper selected CSU-Pueblo president Joseph A. Garcia as his running mate.[35] In the general election, Hickenlooper was elected with 51% of the vote, ahead of former congressman Tom Tancredo, running on the American Constitution Party ticket, who finished with 36.4% of the vote.[36]

Hickenlooper won a tightly contested gubernatorial election by winning a plurality of 49.0% of the vote, against Republican businessman Bob Beauprez.[37]

Hickenlooper married Robin Pringle on January 16, 2016.[38] His first wife, Helen Thorpe, is a writer whose work has been published in The New Yorker, New York Times Magazine, George, and Texas Monthly. In 2010, Hickenlooper told the Philadelphia Inquirer that he and Thorpe attended Quaker meetings and tried to live by Quaker values.[39] Prior to the separation, they lived in Denver's Park Hill neighborhood with their son, Teddy.[40] Upon taking office as governor, Hickenlooper and his family decided to maintain their private residence instead of moving to the Colorado Governor's Mansion.[41] On July 31, 2012, Hickenlooper announced that he and Thorpe were separating after 10 years of marriage.[42] Following his divorce, Hickenlooper moved into the Governor's Mansion.

A cousin, George Hickenlooper, was an Emmy-winning documentary filmmaker before his death in late 2010.[43] John made a cameo appearance in George's 2010 film Casino Jack.[44] Other relatives include Lucy Hickenlooper, a.k.a. Olga Samaroff, a concert pianist, who was the first wife of conductor Leopold Stokowski; and Bourke Hickenlooper, who served as governor of Iowa and a U.S. senator from Iowa.[45]

Hickenlooper appears in Kurt Vonnegut's novel Timequake.[46] In November 2012, Esquire interviewed Hickenlooper as one of the "Americans of the Year 2012".[47]