Riccardo Riccò (born 1 September 1983 in Formigine) is a former professional road bicycle racer from Italy. He remains under contract to UCI Continental team Meridiana-Kamen,[1] but is suspended from all competition until 2024.[2] He was previously ejected from the 2008 Tour de France for doping violations and suspended. Riccò returned to competition in late-2010, but in February 2011 he was fired by his team, Vacansoleil–DCM, after he became seriously ill allegedly through a self-administered autologous blood transfusion.

On 19 April 2012 it was announced that he had been suspended for 12 years effectively ending his career.[3]

He joined UCI ProTeam Saunier Duval–Prodir in 2006 after two successful seasons as an amateur rider, during which he won the Settimana Bergamasca. Prior to joining the team he tried to become a professional with Ceramica Panaria–Navigare in 2005 but wasn't allowed because several blood tests revealed his hematocrit levels exceeded those acceptable. Saunier Duval's sportif director, Mauro Gianetti, suggested he spend a week in the UCI laboratory in Lausanne to prove that his blood values were natural. Further exhaustive tests by the UCI confirmed that Riccò´s hematocrit level was naturally over 50%. This has since been questioned however when, on 17 July 2008, it was revealed that Riccò had a non negative test for EPO, the hematocrit boosting drug, following the Tour de France stage 4 time trial at Cholet.[4][5] It has since been suggested by fellow pro-rider Jérôme Pineau that Riccò openly doped even as a junior rider.[6]

Riccò's breakthrough came during the 2007 Tirreno–Adriatico, when he won two consecutive stages and the Points Classification. He also won a stage and finished second in Settimana internazionale di Coppi e Bartali. He then finished ninth in Amstel Gold Race and sixth in La Flèche Wallonne in his first ever appearance in the Ardennes Classics.[7] He rode the Giro d'Italia as a domestique of team leader Gilberto Simoni and in the process he took the 15th stage at Tre Cime di Lavaredo ahead of his team-mate Leonardo Piepoli. He would finish sixth overall, seven minutes behind eventual winner Danilo Di Luca. In the season finale Giro di Lombardia, he finished second after losing a two-man sprint with Damiano Cunego. 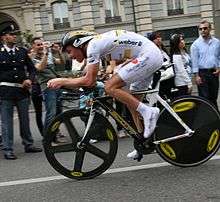 Ricco during the 2008 Giro d'Italia, wearing the white jersey as leader of the young rider classification

In 2008, Riccò rode the Giro d'Italia as team leader, and impressed in the mountains, taking two stage victories, the young rider's classification, and was 2nd overall in the general classification, 1:57 behind winner Alberto Contador. It is suspected that Riccò's performance was not clean. Doping expert Michel Audran has stated that CERA was in use by some riders in the 2008 Giro[8] CERA is the supposedly untraceable third generation EPO used by Riccò in the Tour de France weeks later.

On 10 July 2008, Riccò won stage 6 of the Tour de France with a hilltop finish at Super-Besse giving him his first Tour de France stage win. There were, however, some rumors saying that test results revealed abnormalities in his blood level. The team and the athlete claimed there were no doping issues, however, since Riccò claims to have a naturally high haematocrit level. He reportedly has a UCI certificate attesting to an hematocrit of 51%, 50% being considered the accepted upper limit since 1997. Three days later he achieved his second win at stage 9 of the Tour de France with a break away climb of the Col d'Aspin.

On 17 July 2008, Riccò tested positive for the banned blood booster Continuous Erythropoiesis Receptor Activator (or CERA, a variant of Erythropoietin),[9] from a sample taken following the fourth stage, making him the third rider to test positive for this substance in the 2008 Tour de France after Moisés Dueñas of Barloworld and Manuel Beltrán of Liquigas. He was immediately ejected from the Tour and his team Saunier Duval withdrew of their own volition. Saunier Duval announced the next day that team manager Mauro Gianetti had "lost faith in" Riccò and that he had been fired from the team;[10] Riccò spent the night at the police station[11] and was indicted on charges of "use of poisonous substances". He denied the charges and told RAI television;

I'm very bitter. I spent a night in the police station and it was like being in prison. The magistrate listened to what I had to say. They searched my bags but only found some vitamins that we all use and so they decided to let me go home.

The prosecutor, Antoine Leroy, testified that medical supplies including syringes and equipment for intravenous drips were found in his hotel room, but were unused. According to AFP, the prosecutor said in the first searches, "there were no doping substances as such" found.[12]

It was later revealed that Riccò had attempted to escape doping control officials after stage 4 of the Tour, but had been caught in traffic. As a result of this, officials decided that he was to be tested after every stage.[13] It was also revealed that CERA's manufacturer Roche Pharmaceuticals had secretly worked closely with the World Anti-Doping Agency to develop a test for the drug, and this was how Riccò had been caught.[14]

In the week following the race, Riccò admitted to the Italian National Olympic Committee (CONI) that, independent of the team, he had been taking EPO in preparation for the 2008 Tour de France, and he accepted responsibility for his actions and apologized to his teammates and fans.[15] Riccò told the Italian newspaper La Repubblica that it was the banned doping doctor Carlo Santuccione who supplied the new form of EPO.[16]

Following Riccò's admission of guilt in the affair, his advisors had hoped for a 20-month ban to be handed to the rider,[11] but on 2 October 2008, he was handed a 2-year ban by the Italian National Olympic Committee (CONI),[17] which Riccò found disappointing; "I'm very disappointed and bitter. I expected better understanding. But I made a mistake and it's fair that I pay."[11] However, on 17 March 2009, the Court of Arbitration for Sport reduced the ban to 20 months because of his cooperation; he resumed racing in March 2010 on the Ceramica Flaminia team.

Riccò also faced criminal prosecution in both Italy and France for the doping affair. He was convicted by a criminal court in Padua and given a fine of €3,040.[18] In June 2010, Riccò was handed a two-year suspended sentence by a Toulouse court, which was upheld on appeal in November 2011.[19]

In August 2010, Riccò terminated his contract for Ceramica Flaminia,[20] and signed a two-year contract with Dutch Vacansoleil Pro Cycling Team.[21]

On 6 February 2011 Riccò was admitted to a hospital in critical condition, with sepsis and kidney failure, allegedly due to a blood transfusion he performed on himself with 25-day-old blood. Riccò admitted he had performed the transfusion to the doctor treating him in the presence of his girlfriend Vania Rossi. The doctor treating him reported this information to authorities leading to an investigation being opened against the professional cyclist by police and the Italian Olympic committee (CONI).[22] He was well enough to be released from hospital within two weeks, and was sacked by his team Vacansoleil–DCM.[23] Riccò later denied blood doping, but also stated that he was finished with the sport and that he wanted to train to become a barista.[24] He later changed his mind and said he would indeed like to race again.

In October 2011, it was reported that Riccò confessed to the blood transfusion to CONI[25] although his lawyer later denied these reports.[26]

2014 accused of buying EPO in a McDonalds car park

On 1 May 2014 Riccò was accused of purchasing EPO and testosterone, after being caught by Italian police in the car park of a McDonalds restaurant in Livorno.[30] Riccò later claimed to be "in the wrong place at the wrong time" and his lawyer stated that he was not in the car park to purchase EPO.