Richard Colley Wesley, 1st Marquess Wellesley KG PC PC (20 June 1760 – 26 September 1842) was styled Viscount Wellesley from birth until 1781 and was known as Earl of Mornington from 1781 until 1799. He was an Irish and British politician and colonial administrator.

He was the eldest son of Garret Wesley, 1st Earl of Mornington, an Irish peer, and Anne, the eldest daughter of Arthur Hill-Trevor, 1st Viscount Dungannon. He was also the brother of Arthur Wellesley, 1st Duke of Wellington. He first made his name as Governor-General of India between 1798 and 1805 and later served as Foreign Secretary in the British Cabinet and as Lord Lieutenant of Ireland.

Wellesley was born in 1760 in Ireland, where his family were part of the Ascendancy, the old Anglo-Irish aristocracy. He was educated at the Royal School, Armagh, Harrow School and Eton College, where he distinguished himself as a classical scholar, and at Christ Church, Oxford.

In 1780, he entered the Irish House of Commons as the member for Trim until the following year when, at his father's death, he became 2nd Earl of Mornington, taking his seat in the Irish House of Lords. He was elected Grand Master of the Grand Lodge of Ireland in 1782, a post he held for the following year.[1] Due to the extravagance of his father and grandfather, he found himself so indebted that he was ultimately forced to sell all the Irish estates. However, in 1781 he was appointed to the coveted position of Custos Rotulorum of Meath.[2]

In 1784 he joined also the British House of Commons as member for Bere Alston. Soon afterwards he was appointed a Lord of the Treasury by William Pitt the Younger.

In 1793 he became a member of the Board of Control over Indian affairs; and, although he was best known for his speeches in defence of Pitt's foreign policy, he was gaining the acquaintance with Oriental affairs which made his rule over India so effective from the moment when, in 1797, he accepted the office of Governor-General of India. 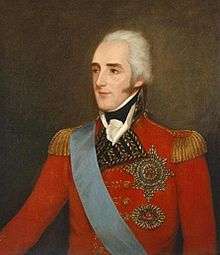 Wellesley in his red-coated officer's uniform.

Mornington seems to have caught Pitt's large political spirit in the period 1793 to 1797. That both had consciously formed the design of acquiring a great empire in India to compensate for the loss of the American colonies is not proved; but the rivalry with France, which in Europe placed Britain at the head of coalition after coalition against the French republic and empire, made Mornington's rule in India an epoch of enormous and rapid extension of British power. Robert Clive won and Warren Hastings consolidated the British ascendancy in India, but Mornington extended it into an empire.[3] On the voyage outwards, he formed the design of annihilating French influence in the Deccan.

Soon after his landing, in April 1798, he learned that an alliance was being negotiated between Tipu Sultan and the French republic. Mornington resolved to anticipate the action of the enemy, and ordered preparations for war. The first step was to effect the disbandment of the French troops entertained by the Nizam of Hyderabad.[4]

The invasion of Mysore followed in February 1799, and the campaign was brought to a swift conclusion by the capture of Seringapatam on 4 May 1799 and the killing of Tipu Sultan. In 1803, the restoration of the Peshwa proved the prelude to the Mahratha war against Sindhia and the raja of Berar, in which his brother Arthur took a leading role. The result of these wars and of the treaties which followed them was that French influence in India was extinguished, that forty million people and ten millions of revenue were added to the British dominions, and that the powers of the Maratha and all other princes were so reduced that Britain became the true dominant authority over all India. He found the East India Company a trading body, but left it an imperial power.

He was an excellent administrator, and picked two of his talented brothers for his staff: Arthur was his military adviser, and Henry was his personal secretary. He founded Fort William College, a training centre intended for those who would be involved in governing India. In connection with this college, he established the governor-general's office, to which civilians who had shown talent at the college were transferred, in order that they might learn something of the highest statesmanship in the immediate service of their chief. A free-trader like Pitt, he endeavoured to remove some of the restrictions on the trade between Britain and India.[5]

Both the commercial policy of Wellesley and his educational projects brought him into hostility with the court of directors, and he more than once tendered his resignation, which, however, public necessities led him to postpone till the autumn of 1805. He reached England just in time to see Pitt before his death. He had been created a Peer of Great Britain in 1797, and in 1799 became Marquess Wellesley in the Peerage of Ireland.[note 1][6] He formed an enormous collection of over 2,500 painted miniatures in the Company style of Indian natural history.

A motion by James Paull (MP) to impeach Wellesley due to his expulsion of the traders from Oudh was defeated in the House of Commons by 182 votes to 31 in 1808.[7]

On the fall of the coalition ministry in 1807 Wellesley was invited by George III to join the Duke of Portland's cabinet, but he declined, pending the discussion in parliament of certain charges brought against him in respect of his Indian administration. Resolutions condemning him for the abuse of power were moved in both the Lords and Commons, but defeated by large majorities.

In 1809 Wellesley was appointed ambassador to Spain. He landed at Cádiz just after the Battle of Talavera, and tried unsuccessfully to bring the Spanish government into effective co-operation with his brother, who, through the failure of his allies, had been forced to retreat into Portugal. A few months later, after the duel between George Canning and Robert Stewart, Viscount Castlereagh, and the resignation of both, Wellesley accepted the post of Foreign Secretary in Spencer Perceval's cabinet. Unlike his brother Arthur, he was an eloquent speaker, but was subject to inexplicable "black-outs" when he was apparently unaware of his surroundings.

He held this office until February 1812, when he retired, partly from dissatisfaction at the inadequate support given to Wellington by the ministry, but also because he had become convinced that the question of Catholic emancipation could no longer be kept in the background. From early life Wellesley had, like his brother Arthur, been an advocate of Catholic emancipation, and with the claim of the Irish Catholics to justice he henceforward identified himself. On Perceval's assassination he, along with Canning, refused to join Lord Liverpool's administration, and he remained out of office till 1821, criticising with severity the proceedings of the Congress of Vienna and the European settlement of 1814, which, while it reduced France to its ancient limits, left to the other great powers the territory that they had acquired by the Partitions of Poland and the destruction of the Republic of Venice. He was one of the peers who signed the protest against the enactment of the Corn Laws in 1815. His reputation never fully recovered from a fiasco in 1812 when he was expected to make a crucial speech denouncing the new Government, but suffered one of his notorious "black-outs" and sat motionless in his place. 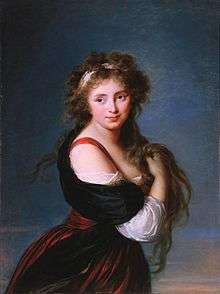 Wellesley lived together for many years with Hyacinthe-Gabrielle Roland, an actress at the Palais Royal. She had three sons and two daughters by Wellesley before he married her on 29 November 1794. He moved her to London, where Hyacinthe was generally miserable, as she never learned English and she was scorned by high society: Lady Caroline Lamb was warned by her mother-in-law, Elizabeth Milbanke, a noted judge of what was socially acceptable, that no respectable woman could afford to be seen in Hyacinthe's society.

Through Lady Charles Bentinck, Wellesley is a great-great-great grandfather to Queen Elizabeth II.

The children were seen by most of Richard's other relatives as greedy, unattractive and cunning, and as exercising an unhealthy influence over their father.

Following his wife's death in 1816, he married, on 29 October 1825, the widowed Marianne (Caton) Patterson, whose mother Mary was the daughter of Charles Carroll of Carrollton, the last surviving signatory of the United States Declaration of Independence; her former sister-in-law was Elizabeth Patterson Bonaparte. They had no children. If not as unhappy as his first marriage, it was generally regarded as a failure: Wellington, who was very fond of Marianne and was then on rather bad terms with his brother, pleaded with her not to marry him, warning her in particular that Richard's children by Hyacinthe would see her as an enemy.[9] 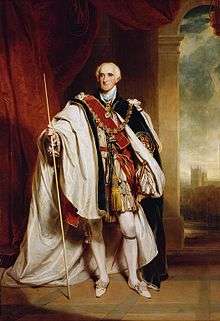 Lord Wellesley in Garter Robes, with the badge of the Grand Master of the Order of St Patrick around his neck and carrying the white staff of office as Lord Steward. The portrait was painted by Sir Martin Archer Shee and exhibited at the Royal Academy in 1833.

In 1821 he was appointed Lord Lieutenant of Ireland. Catholic emancipation had now become an open question in the cabinet, and Wellesley's acceptance of the viceroyalty was believed in Ireland to herald the immediate settlement of the Catholic claims but they would remain unfulfilled. Some efforts were made to placate Catholic opinion, notably the dismissal of the long-serving Attorney-General for Ireland, William Saurin, whose anti-Catholic views had made him bitterly unpopular. Lord Liverpool died without having grappled with the problem. Canning died; and on the assumption of office by Wellington, his brother resigned the lord-lieutenancy. He is said to have been deeply hurt by his brother's failure to find a Cabinet position for him (Arthur made the usual excuse that one cannot give a Cabinet seat to everyone who wants one).[10] He had, however, the satisfaction of seeing the Catholic claims settled in the next year by the very statesmen who had declared against them. In 1833 he resumed the office of Lord Lieutenant under Earl Grey, but the ministry soon fell, and, with one short exception, Wellesley did not take any further part in official life.

On his death, he had no successor in the marquessate, but the earldom of Mornington and minor honours devolved on his brother William, Lord Maryborough, on the failure of whose issue in 1863 they fell to the 2nd Duke of Wellington.

He and Arthur, after a long estrangement, had been once more on friendly terms for some years: Arthur wept at the funeral, and said that he knew of no honour greater than being Lord Wellesley's brother.[11] 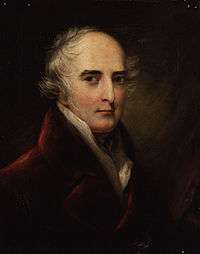 The Township of Wellesley, in Ontario, Canada, was named in Richard Wellesley's honour, despite the many references (e.g.: Waterloo, Wellington County) to his brother, Arthur Wellesley in the surrounding area, as was Wellesley Island, located in the St. Lawrence river at Alexandria Bay. Wellesley Island also serves as the last point exiting the United States before crossing to Hill Island, in Canada.

The Wellesley Islands off the north coast of Queensland, Australia, were named by Matthew Flinders in honour of Richard Wellesley. The largest island in the group is Mornington Island.

Mornington Peninsula, south of Melbourne, was named after him.

As of the summer of 2007, a portrait of Marquess Wellesley hangs in the Throne Room at Buckingham Palace.