Brades (also Brades Estate; approximate population 1,000) is a village and the de facto capital of Montserrat since 1998.[1]

The official capital of Montserrat at Plymouth in the south of the island was abandoned in 1997 after it was buried by the eruption of the Soufriere Hills volcano. Interim government buildings have since been built at Brades, becoming the new capital in 1998. The move was initially intended to be temporary, but it has remained the island's de facto capital ever since.[2] Several names have been suggested for the new capital now being constructed in the Little Bay area. These include Port Diana, in memory of Diana, Princess of Wales,[3] and St Patrick's, to commemorate the March 17th Uprising and to attract Irish-American tourists. In support of the 2012 Summer Olympics in London, the Primary School in Brades participated in a "special 'world peace' project" which was revealed at the Games, in which they submitted a quilt symbolizing peace, including a depiction of the flag of Montserrat.[4] 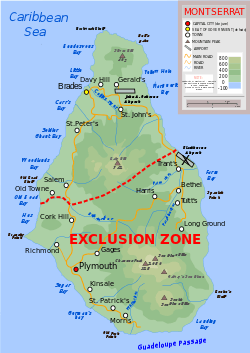 Brades is located at the northwest end of Montserrat. It lies to the north of St Peters and Bunkum Bay, in the vicinity of Carr's Bay and Little Bay. The main road of the island reaches its furthest north at Carr's Bay and then heads southeast, past the airport in the centre of the island.[5] The village of Davy Hill lies off the main road in close proximity to the northeast; The Collins River passes between the settlements and flows into Little Bay. To the northeast of Brades, in the centre, the island becomes hilly, reaching an elevation of 403 m at the peak of Silver Hill.[6]

Frommer's said of the town: "Overall, you'll get the sense of a small community galvanized into new forms of self-reliance and cooperation, with lots of emphasis on somewhat gritty business-related visits from construction crews and British and international relief agencies".[7] Brades contains several small shops, a bank, a branch of the Royal Bank of Canada on the Brades Main Road,[8] government offices, a post office, a library, and a pharmacy.[9] Runaway Travel, the largest and most comprehensive travel agency on Montserrat is based in Brades.[7] The firm Gas Grant Enterprises and Trading has its offices in Brades, as does Montserrat Airways and the Montserrat Tourist Board.[10] The Attorney-General's Chambers are situated at 3 Farara Plaza in Brades.[11] Eateries of note in the area include Soca Cabana, a beach shack on Little Bay which sells chicken and fish dishes with live reggae music on Friday nights, the blue hilltop shack People's Place, and Tina's on Brades Main Road which serves lobster burgers, garlic shrimp, coconut cream pie and ginger beer.[9]

Scuba Montserrat, operated by PADI-certified divers Emmy Aston and Andrew Myers, is situated in Little Bay near the port entrance and is a notable location for scuba diving on the island. They offer diving and snorkeling courses, running boat trips to Rendezvous Bay to the north and renting out two-seater kayaks.[12]