Belmopan (/ˌbɛlmoʊˈpæn/) is the capital city of Belize. Its population in 2010 was 16,451.[2] Although the smallest capital city in the continental Americas by population, Belmopan is the third-largest settlement in Belize, behind Belize City and San Ignacio. Founded as a planned community in 1970, Belmopan is one of the newest national capital cities in the world. Since 2000 Belmopan has been one of two settlements in Belize to hold official city status, along with Belize City.

Belmopan is located in Cayo District at an altitude of 76 metres (249 feet) above sea level.[4] Belmopan was constructed just to the east of the Belize River, 80 km (50 mi) inland from the former capital, the port of Belize City, after that city's near destruction by Hurricane Hattie in 1961.[4][5] The government was moved to Belmopan in 1970.[6] Its National Assembly Building is designed to resemble a Pre-Columbian Maya temple.[7]

After Hurricane Hattie in 1961 destroyed approximately 75% of the houses and business places in low-lying and coastal Belize City, the government proposed to encourage and promote the building of a new capital city.[6] This new capital would be on better terrain, would entail no costly reclamation of land, and would provide for an industrial area. In 1962, a committee chose the site now known as Belmopan, 82 kilometres (51 mi) west of the old capital of Belize City.[6]

Since Belize was a British colony (known as British Honduras) in 1964, Premier George Cadle Price led a delegation to London to seek funds to finance the new capital.[8] Although they were not ready to commit to funding such a large project, the British government showed interest due to the logic of locating the capital on high ground safe from tidal waves. To encourage financial commitment from the British government, Premier Price and the PUP government invited Anthony Greenwood, Secretary of State for the Commonwealth and Colonies, to visit Belize. One of the highlights of this visit was the unveiling of a monument at mile 49 on the Western Highway. The monument records that Lord Greenwood dedicated the site for the new capital on 9 October 1965. Thus, in a fashion, there was a commitment.

The name chosen for the new capital, Belmopan, is derived from the union of two words: "Belize", the name of the longest river in the country, and "Mopan",[9] one of the rivers in this area, which empties into the Belize River. The initial estimated cost for building this new city was 40 million Belize dollars (US$20 million). Only 20 million Belize dollars (US$10 million) were available, but the momentum was not to be lost.[10]

In 1967, work began; the first phase of the new city was completed in 1970 at a cost of 24 million Belize dollars (US$12 million). From 1970 to 2000 the administration of Belmopan was managed by the Reconstruction and Development Corporation, known as "Recondev."[11] Recondev was vested with the power and authority to provide, or cause to be provided, the municipal functions necessary for the smooth running of the city's business and infrastructure.

There was a reluctance initially amongst foreign governments to relocate their embassies to Belmopan as there was some doubt as to whether this inland area would really become the functioning capital.[12] The British High Commission opened in 1981 when Belize achieved independence, moving to its current location in 1984. In February 2005, the United States government broke ground and started building a new embassy in Belmopan, 43 years after it was chosen as the new capital city.[13] The U.S. embassy was officially opened on 11 December 2006.[14] Mexico, Brazil, Costa Rica, El Salvador, and Venezuela also have embassies in Belmopan, while Ecuador, Chile, and the Dominican Republic are represented by consulates. However, with four embassies and 29 consulates the former capital of Belize City still has most of the country's foreign diplomatic community.[15]

The National Assembly Building is the focal point of the city's design, with the grey stone architecture and broad steps designed to resemble a Mayan temple, reflecting the nation's cultural heritage. Surrounding buildings mirror this design, with the East Wing and West Wing buildings contributing to the overall impression of an ancient Mayan plaza.

The original buildings were designed with extensive ventilation to accommodate the tropical climate leading to a pock-marked effect on the buildings' walls.

Extensive internal renovations and the widespread introduction of air-conditioners has caused this design to become ineffective and inefficient.

Belmopan is 50 miles (80 km) inland from the Caribbean and 76 meters (249 feet) above sea level, located near the Belize River Valley with a view of the Mountain Pine Ridge foothills. (The climate at night is cool.) The city is off the Hummingbird Highway. Two and a half hours south of Belmopan, by road, is the Cockscomb Basin Wildlife Sanctuary.[17] It is served by the Hector Silva Airstrip.

Belmopan features a tropical monsoon climate (Am) under the Köppen climate classification. The city has a lengthy wet season that runs from May through February and a short dry season covering the remaining two months. As is the characteristic of several cities with a tropical monsoon climate, Belmopan sees some precipitation during its dry season. March and April are Belmopan's driest months with roughly 45 mm of rainfall observed on average during those months. Like Belize City, these are somewhat unusual months for a city with a tropical monsoon climate to have its driest months of the year. Typically the driest month for a city with this climate type is the month after the winter solstice, which in Belmopan would be January. Average monthly temperatures are somewhat constant throughout the course of the year, ranging from 23 °C to 28 °C.

The City of Belmopan has three pre-schools, four primary schools and four secondary schools[19] as well as a modern Regional Language Centre (RLC) on the central campus of the University of Belize,[20] where students from neighbouring Spanish-speaking countries come to study English. University of Belize's campus in Belmopan has the following faculties: Education and Arts, Management and Social Sciences, Science and Technology, and Nursing and Allied Health.[21] The church/state system prevails in Belizean education,[22] especially where pre-school, primary and secondary school education is concerned,[23] and nearly all schools in Belmopan are sustained by churches.[6] 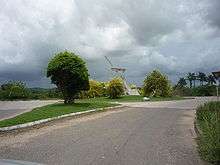 The population of Belmopan proper (an estimated 20,000 people in 2009) is of various ethnicities, including Kriols, Garifuna, Mestizo, Maya, and recent immigrants from such Asian countries as the People's Republic of China and Republic of China.[25]

There are five zones around Belmopan proper:[26]

Some of Belmopan's noteworthy events include presentations by the Belmopan Choral Society, the Festival of Arts for school children, and National Day activities.

The University of Belize's Black Jaguars squad has won two national championships playing out of Belmopan. Nearby communities including Roaring Creek, Camalote, Esperanza, and Georgeville play a softball tournament in the early part of the year.

The City Council promotes Belmopan as "The Garden City." A Crime Prevention Initiative has recently been introduced by the council in conjunction with the Belize Police Department, which introduced a Special Constable/Community Policing Programme. The council cooperates with social organizations like the Lions Club, the Belize Scout Association, Rotary International, and other NGOs. Social and cultural events and meetings of community groups are frequently held at the George Price Centre.

Museums and galleries in the city include Belize Archaeology Museum. 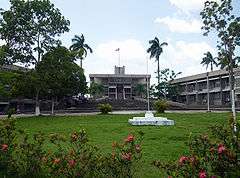 At its inception and afterward, Belmopan was governed by the corporation RECONDEV (Reconstruction and Development Corporation), which answered to the government.[11]

Residents of Belmopan voted in a referendum in 1999 to switch to direct election of a city council. In 2000, Belmopan was incorporated as a city and held its first City Council election.[6] Anthony Chanona of the People's United Party was elected mayor with a six-man slate, and reelected in 2003.[28] Following the UDP's municipal victory of 2015, the mayor of Belmopan is Khalid Belisle.[29]

As Belmopan is the seat of government, many of its inhabitants work for the national government in administrative or technical roles. Many are based in the large cluster of government buildings around the National Assembly building.

Belmopan has approximately 589 business establishments (the 1997 census revealed the presence of 373). Five international banks are in the city, as are several local financial institutions. A bus terminal and market complex were constructed in 2003.

Within the zoning regulations, Belmopan has set aside approximately 200 acres (81 ha) of land made up mostly of one-acre (4,000 m²) parcels in city limits. While there is very little industrial activity at present, the council has embarked on a scheme to attract local and foreign investment to the city. Plans are underway to create a 100 acres (40 ha) industrial park close to the municipal airstrip — a paved 1,100-meter strip with no control tower or hangars.