The Caymanian government offices are located in George Town. These offices include the Legislative Assembly of the Cayman Islands, the Court Houses and the Government Administration Building. The Government Administration Building houses the offices of the Premier and other members of Cabinet, the Deputy Governor and his staff as well as other elected officials and civil servants. The former Old Courts Building located at the corner of Shedden Road and Harbour Drive is now the National Museum of Grand Cayman. The building was built more than 150 years ago and has served the Caymanian government not only as a court building but as a jail and the island's first official Post Office.

An aerial view of George Town in 1996

George Town's city limits extend from the east at the edge of the South Shore District, north just beyond Owen Roberts International Airport, south to Hog Sty Bay and west to Seven Mile Beach and the West Bay District. George Town's famous Seven Mile Beach is a long crescent of coral-sand beach extending up to the West Bay region of Grand Cayman and is the most popular and populated area for tourists on the island. 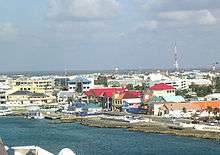 Business buildings near the centre of George Town

The financial services generated CI$1.2 billion of GDP in 2007 (55% of the total economy), 36% of all employment and 40% of all government revenue. The Cayman Islands ranks fifth internationally in terms of value of liabilities booked and sixth in terms of assets booked. It has branches of 40 of the world's 50 largest banks. The Cayman Islands are the second largest captive domicile in the world with more than 700 captives, writing more than US$7.7 billion of premiums and with US$36.8 billion of assets under management. There are more than 9,500 funds under licence with globally recognised legal, audit/accounting and fund administration services (incl. the Big Four auditors). Major law firms such as Maples and Calder have established themselves in the Cayman Islands. Similarly, large accounting firms such as KPMG, Ogier, Ernst & Young and Deloitte are also present. As a result, the Cayman Islands are a leader in captive domiciles, hedge fund registrations and is considered a major international banking centre.

The Waterfront near Harbour House

George Town is a popular port of call for the Caribbean with cruise ships anchoring in George Town Harbour Tuesday through Friday. Cruise ships calling at George Town anchor offshore and ferry their passengers ashore by tenders, also known as shuttle boats. Passengers disembark in George Town, in the centre of the Grand Cayman shopping district and usually remain anchored from early morning until mid-afternoon. 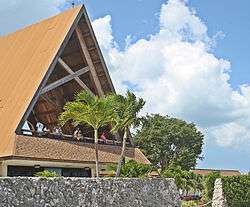 The Observation Deck at the Owen Roberts International Airport

George Town, as well as the rest of Grand Cayman, is served by nearby Owen Roberts International Airport. It is one of the only two entrance points to the Cayman Islands by air, the other being Charles Kirkconnell Airport on Cayman Brac. 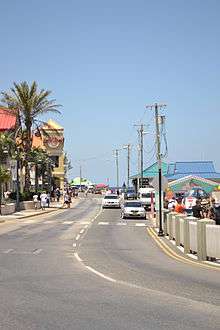 The following highways serve the city:-

A fleet of Share taxi minibuses serve the city. The daily service starts at 6 am from the depot and the schedule is as follows from George Town to:[4]

St Matthew's University campus, on the outskirts of George Town
See also: List of schools in the Cayman Islands

John Gray High is in the former George Hicks High School building since 2012.[5]

Caymanian children are entitled to free primary and secondary education. Various churches and private foundations operate several private schools that offer American and British based studies starting from nursery up to A Levels and College.[6]

St. Matthew's University, a Medical and Veterinary school is located on the outskirts of George Town.[8]