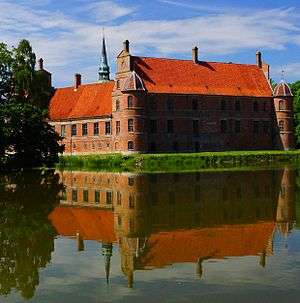 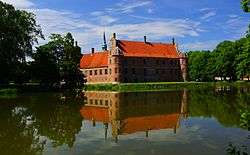 The pond is full of carp and other fish

Rosenholm Castle (Danish: Rosenholm Slot) is Denmark's oldest family-owned castle, and is one of the best-preserved complexes from the golden age of the manor house – from 1550 to 1630. Rosenholm Castle was founded in 1559 by the Danish nobleman Jørgen "George" Rosenkrantz. His family is among the oldest and most famous in Danish history. Shakespeare chose to use the name in the play Hamlet. Later extended, standing complete in 1607 with four wings, clearly influenced by the Italian Renaissance style. The castle interior was modernised in the 1740s in the baroque style, at which time a large baroque garden was laid out, covering an area of 5 ha., with avenues of limetrees and hedgerows of beech.

Sights & attractions: Built 1559-1607. Manor house milieu over 450 years. Anthroposophic paintings by the painter Arild Rosenkrantz. Baroque park with symmetrical avenues. Rare gazebo, named Pirkentavl, from around 1560. The manor Holm is known from the 14th century. It was owned by the Catholic Church, but at the Reformation in 1536 it came in possession of The Crown. King Frederick II exchanged it for some other estates to Jørgen Rosenkrantz in 1559. The same year he began the construction of a new main building called Rosenholm. Its architecture was very much different from other castles in Denmark. It was mostly inspired from Italy. On the main facade there was an open loggia.