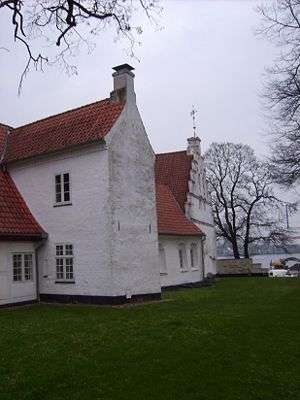 Looking out towards the port

Aalborghus Castle (Danish: Aalborghus Slot) is a castle in Aalborg, Denmark. It is a half-timbered (bindingsværk) castle built by King Christian III from 1539 to around 1555 initially as a fortification.[1] Soon it became the seat of the king's provincial governors in Northern Jutland, and after the introduction of absolutism, became used by the State County of Northern Jutland for taxes.

A building had existed at the site before Christian III's castle. It stood south of the castle and is mentioned in the first documentation of Aalborghus, dating back to 1340.[2] It was owned by Margrethe I and was the death place of King Hans in 1513 who died in a horse riding accident.[2] 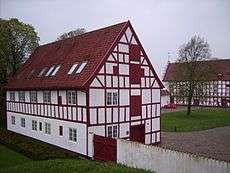 Frederick I had originally intended to destroy the initial building around 1530 and moving to a different site to convert Aalborg's Franciscan monastery into a castle. However he left the decision to his son Christian III, who later decided to demolish the original in 1539 and contracted the royal architect Morten Bussert to build a new fortified castle north of the old site, near the Liim Fjord.[2] A barrier wall was built alongside the fjord, and later in 1633, Christian IV built a north wing facing the port, which was used as a granary for the storage of food supplies such as corn. A western wing was built to the same effect later, holding other supplies such as meats and fish.[2]

The south-facing wing was created between 1808 and 1809 but all that remains today of the original castle is the east wing.[1]

Between 1954 and 1964 the old granaries underwent full renovation by the Royal Inspector of Listed Buildings, Leopold Teschl, who converted them into council offices.[2]